It’s been around for a while now but one of my favourite adverts is not some hilarious joke fest or epic filmic production but a simple spoken word scene in a photo booth. And I was surprised to discover what is at the heart of a campaign that is far from conventional in its approach. I’m not totally sure it works from the point of view of promoting the company it’s supposed to but I’m glad they’re making them! I’m talking about Nationwide and their series of ads featuring poetry and spoken word narratives. These have elicited a mixed response from some people who find them irritating but they have been running for a while now and I always pay attention to them which says something. The best known one is last year’s Mother’s Day advert, more on which later. This one called `Pals` features a couple in the booth listing the things about the other owns or does. And at the end they pull silly faces when the reassuringly crunchy sounding camera flash goes off. It makes you instantly think you’d like to know these people. Whether it makes you hot foot it to your nearest Nationwide branch is another matter! Here it is…

The ad does have a promotional point encouraging you to recommend a friend to become a Nationwide customer and you get £100. The featured duo are poets Laurie Ogden and Toby Campion though when I first saw it I thought the director had just picked two friends from the public. Laurie Ogden has been in several of the Nationwide ads. She is a poet and playwright who graduated from Goldsmiths University of London with a first class Honours degree. In 2016 she won the Outspoken Performance Poetry Prize. Last year she performed in two plays at the Edinburgh Fringe Festival being the writer of one of them (called Twix). She wrote `Hands` which was used in Nationwide’s Mother’s Day campaign.
Toby Campion is also a playwright, poet and was once called “the voice of a generation” by BBC’s Sunday Politics and has performed in venues as varied as the Royal Albert Hall and Glastonbury as well as taking part in international poetry tournaments. His Twitter tells us he is the UK Poetry Slam Champion. Hailing from the Midlands, he also produces the UK National University Poetry Slam & Summit and co-runs Find the Right Words, a poetry night. A book of some of his words titled Through The Blood is available.
The thing about the ads is that if you didn’t notice the logo you might easily forget who they are for. However research has apparently proved that they have increased public awareness of Nationwide and become talking points in themselves. So what prompted this unusual approach to advertising?
Launched in 2016, the overall campaign called Voices Nationwide stems from Nationwide’s status as a building society founded with the intention of helping people own their own homes. There used to be more of these but one by one they turned into banks, often via a customer vote in which the result was never in doubt when each customer would receive cash as a result of the change. Nationwide though remained as a building society. The campaign uses spoken-word artists, reflecting the organisation’s role as an enabler of ordinary people. The rather grand way they put is to tell “the greatest marketing story never told’ focusing on ordinary people and its heritage to differentiate it from all the banks as well as reminding people of its history as an organisation that is owned by its members. .
Significantly the results are as unfiltered as possible. The ad’s creative director Jim Thornton explained “These are designed to be genuine voices expressing what’s important to them, right from the start the client agreed that neither we nor they had the right to change the poet’s words, except if there was a legal issue or a time length problem. Otherwise they are entirely unedited.”
Last year this ethos was used to fuel what will probably be the best remembered of the adverts. VCCP Media and client agency MEC joined together to create “an honest and heartfelt real-time conversation around Mother's Day” based on the idea of how mothers build society. The ad was put together in an unusual manner using social media to find people’s stories about things they learned from their mothers using the hashtag #gotthisfrommum.  Over eight days, a team of poets and marketers monitored these memories and thoughts before turning them into verse. The strongest ones were filmed and posted on video. All this fed into a Mother's Day ad based on one story that was shot and edited in less than 24 hours. The poem `Hands` was written by Laurie Ogden based on a real-life story from Gavin Kelly in Belfast and in the ad we see her live reaction to it as Laurie reads it out.
You should be able to see it via this link   https://youtu.be/flCCxTMpbcQ 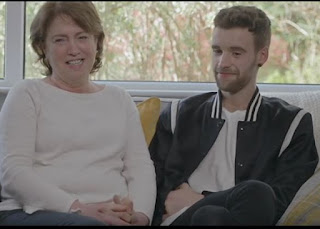 Its interesting to read some of the negative comments online about `Pals`. Most of them seem irritated by the fact that the two people like each other – one commentator says “this is why I don’t want friends”. Really? It is certainly beyond reason that people dislike a previous ad- featuring sisters Flo and Joan- so much that police had to be called in to investigate “death threats”. People seem to view these things solely through the prism of their own lives and with a chip on their shoulder. On the other hand a more valid criticism was made on a blog called Learn with Fearn suggesting that poetry is more appropriate for opposing corporations rather than promoting them. She says that both poets other work is noticeably less cosy than what they do here.
For Nationwide the ad certainly did the business when first shown nearly a year ago. For the month after, the company enjoyed a large rise in ad awareness.  These adverts do, I suppose, imply that Nationwide is more important than it is and yet support to be able to buy a house is important and as pieces of art- which ads become long after their initial advertising impact- they are very good indeed.
BTW I am not a Nationwide customer and this is not an ad!!
For more info on Laurie Ogden go to her Twitter page @ogdenlaurie
For more info on Toby Campion go to his website  https://tobycampion.co.uk/