Reviewed by Chris Arnsby. Mike Read: "Hello chums. Welcome to Top of the Pops. Listen, it's bad enough us having to work together on the radio in the mornings, but we're stuck with each other on Top of the Pops now as well." Simon Bates: "Looks like being a good evening, though. Here's our first on Top of the Pops. It's Howard Jones, New Song, for the very first time. Over there."


[44] Howard Jones: New Song. Bad news everyone. This isn't a live edition of Top of the Pops so Simon Bates refuses to tell us the time. It's 7.30pm for anyone worried. On stage Howard Jones is joined by the Answer Prancer from Brass Eye or maybe it's just any old passing dancing fool who has painted their face, stripped to the waist (the top half), and donned plastic chains. It's deeply symbolic. (John- It’s Jed of course. Everyone knows Jed.) "I don't want to be hip and cool," sings Howard Jones as he abandons the synthesiser to dance in front of it in an uncool way (and yet somehow the music keeps going). The Answer Prancer is the real star of this performance. By the end of the song he has undoubtedly cast off his mental chains, but not his physical plastic ones. Which is odd because they look like they'd just snap off. 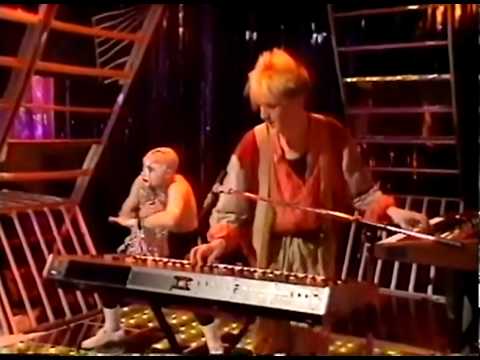 [8] David Bowie: Modern Love. Dave's not here, so have a look at the video instead.


[41] Hot Chocolate: Tears On The Telephone. To my (tin) ear, the verses of this song keep sounding like they are going to turn into When Smokey Sings, by ABC.


[50] The Alarm: 68 Guns. Simon Bates launches into an unlikely sounding story about The Alarm being summoned back to Top of the Pops by a US cop wielding a telegram. Unusually this is the first performance tonight on the main Top of the Pops stage. Normally the hosts introduce the show in front of the neon logo just to the side of the main stage. Tonight's show begins instead by cutting from the titles to a static shot of the logo and then to Mike Read and Simon Bates looking down from the scaffolding bridge. It's a minor departure from the normal format. I assumed at first that maybe Top of the Pops was in a smaller studio with less room for the normal set but that's obviously not the case. Brian Whitehouse is listed as being in charge of Production, so he's obviously trying to ring a few changes. 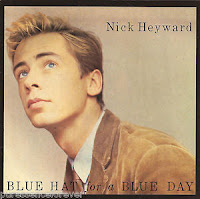 [45] Nick Heyward: Blue Hat For a Blue Day. Nick Heyward has been practising his miming, following his failure at the start of Whistle Down The Wind back in March. His big move here is to mime a finger snap for a maracas noise. Or maybe he has some terrible calcium deficiency and the subsequent popping sound is his knuckles cracking. (Fact John- This was a song Nick originally wrote for Haircut 100 before he left and took it with him and probably the hat as well)


[21] Soft Cell: Soul Inside. Marc Almond is dressed in black trousers, with a black shirt, black headband and matching black sleeveless leather jacket. There's a skull, or possibly snake design on the back of the jacket. He looks like he's auditioning for the role of one of the Cobra Kai students in Karate Kid.


[17] Heaven 17: Crushed By The Wheels Of Industry. On video. Simon Bates works in a quick plug for Michael Hurll's other BBC1 programme, The Late Late Breakfast Show. Heaven 17 singer Glenn Gregory takes part in a new London to Paris air race against Leo Sayer. Who won? Luckily you can find out by watching the programme on Youtube.


[1] Culture Club: Karma Chameleon. The main stage is shunned again. Culture Club are exiled to the far end of the studio, on the same stage used earlier by Hot Chocolate. Normally the number one group appears on the main stage. Has it been declared structurally unsound? There are fewer people in The Alarm so maybe it was safe for them; although their hair does add the equivalent weight of another person.


[26] Hot Streak: Body Work. The audience are allowed to clump around on the main stage for the traditional end of show dancing. This puts paid to my theory that a plague of woodworm had chowed down on the wooden rostra and reduced its load bearing capacity.