Which name do you hear? This conundrum has been driving people crazy over the past week or so and this is just one of zillions of posts, Tweets and general online chatter as to which word is actually being spoken. It’s remarkable. I’ve seen footage of two people equally convinced of the word they heard but one of them quite categorically hears “yanny” whereas the other equally hears “laurel”. What has fascinated people is the fact that whichever word you hear there is no ambiguity about it and you cannot understand how someone else could hear a completely different word. Not since the gold dress / blue dress has there been such an online kerfuffle!


Look at the two words- they don’t even seem that alike. Yanny and Laurel could be the name of a Sixties folk duo! If you just saw the words written down out of context you’d never imagine it would be possible to mix them up but this is what has happened. So what is going on? A psychology professor no less- David Alais from Sydney University - explained last week to a bemused world which probably remained just as bemused afterwards. The words he said are a “perceptually ambiguous stimulus”.  There you go then. What he means is that it’s the aural equivalent of those pictures where you might see a face or a vase for example. He reckons the brain “flips back and forth” because it can’t really work out what the answer is. Though the words do not look similar when you speak them they do, he says, have a similar “timing and energy content.”
The suggestion is that your age is a determining factor with older people more liable to hear “Yanny” though that doesn’t explain the clips I’ve seen with younger people hearing it. The issue of the accent is important too- the voice may sound computer generated but it has an American accent which could make the words sound different to non- Americans. What you listen to the clip on may also affect your interpretation as there’s a difference in the sound you’d get from a smartphone as opposed to through big speakers. For example the clip above is from The Guardian and much cleaner than any other version I’ve heard. 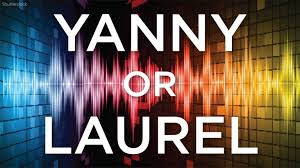 There do seem to be more stories supporting the idea that “Laurel` was/ is the word but then outlining the reasons why half the people who hear it think it says “Yanny”. If you want a plausible explanation then there is one but in the end that might be less interesting than continuing to speculate on which word it actually is.  Go the foot of the post if you want to find out.
There have been lots of polls in which the results may have been inconclusive but have generated huge debate over the past week or so. One thing that has puzzled me is what “Yanny” means. “Laurel” is a name or a type of tree but what –or who- is a Yanny? Amusingly Vocabulary.com has added a definition describing it as “a word or a phrase that is capable of distracting the entire Internet for at least 24 hours”. More sensibly it is also used as a boy’s name in Greece where it means “gracious”.
After a week there is no sign that the whole thing will float away until everyone has heard the clip and made up their mind what it is saying. What word do I hear? Well that’s obvious isn’t it!
An explanation for those who need to know - The clip has been traced back to a recording made by opera singer Jay Aubrey Jones for Vocabulary.com back in 2007. This has subsquently been compressed and in that process part of the sound spectrum was lost meaning that some letters can be mis-heard as others. Our brains and ears will only pick up the strongest frequencies and this is where I got lost but if you go to lifehacker.com you can find a long technical explanation and the reveal as to which word it actually is.
Alternatively you can just carry on arguing about it!!
Posted by John Connors at 22:37