Reviewed by Chris Arnsby: John Peel: "Live from Shepherd's Bush London it's Top of the Pops." David Jensen: "Gee, John this is the 999th edition. I guess it marks the end of an era" John Peel: "I don't think so. Not really. It is a special programme though, not only the European charts but also the Southeast Asian charts."David Jensen: "That's right, but to kick off something new in our chart from Galaxy, this is Dancing Tight." John Peel: "Is there any other way?"


[20] Galaxy: Dancing Tight. Galaxy are rhyming tight with night. We can't be far from follow up rhymes with right, sight, and trite. Still never mind that. Regardez! At the back of the stage. Behind the lead singer. One of the Zoo dancers is determinedly doing the robot dance despite the fact that it doesn't really match the song. Can he keep this up for the whole programme? (John –Perhaps he is actually a robot?) 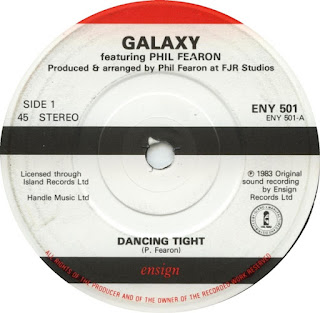 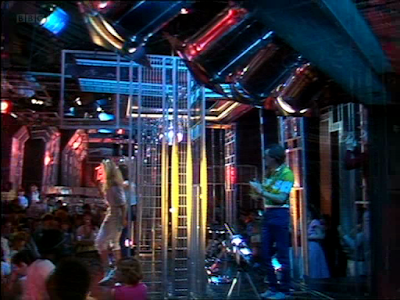 [23] Sweet Dreams: I'm Never Giving Up. Sweet Dreams are living up to the name of their song. Luxembourg won Eurovision with Si La Vie Est Cadeau (Is This The Street Of The Hat) but Sweet Dreams are not giving up yet; give it a couple more weeks. (John- What is a street of the hat?) Meanwhile, a very low key stage invasion is taking place behind the group. A couple of members of the public have seized their chance to stand on the edge of the stage. On the line "but baby come what may," you can see a man in a maroon jumper behind the singer in the white jumpsuit. After a moment’s hesitation he walks up some stairs and heads to stage right. He's followed by another man who quickly loses his nerve and jumps back down. When the camera angle cuts to show the stage right area there's a little crowd of people; most prominently a man in a green, white, and yellow top. None of them are particularly great dancers, or very fashionably dressed so they're probably not audience cheerleaders. When the second chorus starts there's a shot of the stage from the right which shows the man in green, white, and yellow standing right next to a set of lights -there's no way he's supposed to be there. He's joined by a woman and the pair shuffle even further on to the stage before they both look round and duck back behind a scenery pole; as if someone had a word.


Far East Charts: David Jensen's been on holiday to Singapore with a film crew. Does he document every part of his life? Here's his report for the viewers at home. "In this part of the world there are no singles for sale." Well, that's that concept knackered then. Still, we've got four minutes to fill so here's clips of Paula Tsui singing Fantasia; China Doll and their song Chasing The Dragon; and Lam with Mirages. 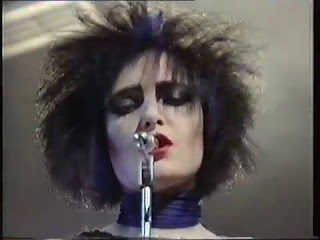 [37] The Creatures: Miss The Girl. Fasten your seatbelts it's Proustian rush time. I have such a clear memory of seeing and hating this performance. I remember going to school the next day and rubbishing the song to a friend. Why did it generate such a strong reaction from my 11 year old self? I think it's partly because it lacks anything I expected in a single; there's no real beat or indeed any instruments other than a marimba and the lyrics are (deliberately) repetitive. I have a horrible suspicion that at the time I preferred I'm Never Giving Up. Miss The Girl is more concerned with generating a strange atmosphere than being a nice tune you can dance to. It's closer to a piece of performance poetry. It's still not my favourite song but I can at least now recognise that it's trying to do something different. Robot dancing update: no sign.


European Charts. John Peel's been dispatched via Sealink to Boulogne. First up is Cook Da Books in a scene from French film La Boum 2; a concert featuring 300 people with asbestos fingers holding up cigarette lighters. Next it's Hoffman & Hoffman with Rucksicht. which came fifth in Eurovision 1983 (94 points). The unlikely combination of Mireille Mathieu and Patrick Duffy follow with a song called Together We’re Strong. Patrick Duffy towers over the petite Mireille Mathieu. The height distance is really distracting; couldn't they have found her a box to stand on? Then it's Nena and 99 Luftballoons. We'll hear more about her next year. The charts are wrapped up with a lengthy clip from David Bowie's Let's Dance, in case anyone in the UK has forgotten what it sounds like.


[22] Tears For Fears: Pale Shelter. Top of the Pops has started superimposing a caption at the beginning of each performance giving the band name and chart number. This is presumably burnt into the master tape of the episode (what with me watching it here in the space year 2018) and would seem to make it harder to repeat performances. Obviously you can snip out the bit of the performance with the caption over the top, but then you cut the introduction short. Maybe that's not considered a problem. A quick check suggests that the last repeat performance was Spandau Ballet's Communication broadcast on the 10/03/1983 edition. Has it become easier to show a video than to repeat a studio performance?


[24] Kissing The Pink: The Last Film. A second twitchy and frenetic performance from Kissing The Pink. It's like watching a bunch of badly strung Thunderbirds puppets. This time the drummer paid attention in rehearsal and tones it down for the quiet bit.


[17] The Kids From Fame: Friday Night. There's a suspiciously truncated goodbye from John Peel, "and now we're going to play you out with the Kids From Fame. Goodnight." My guess is that it was originally considerably longer and designed to promote next week's 1000th episode party which features a lot of unrepeatable presenters. On a more cheerful note, robot dancing man is back. This time he's in front of the screen with the Top of the Pops logo. Obviously he's only used to bookend the show.
Posted by John Connors at 22:57