A thoughtful film about a topic that might be easy to overdramatise, Brad’s Status is much better than it’s bland title suggests. Brad Sloan is 47 and, working for a non- profit making organisation, he seems to have a good life with socially conscious wife Melanie and well- adjusted son Troy. However he can’t help comparing himself to old college mates who seem to be doing rather better. All are richer and appear to have a bigger lifestyle not that he knows first-hand having picked most of this up on social media. These feelings of morose dissatisfaction grow as he takes his son on a visit to potential colleges which brings into focus his own teenage aspirations and how he views his life trajectory. 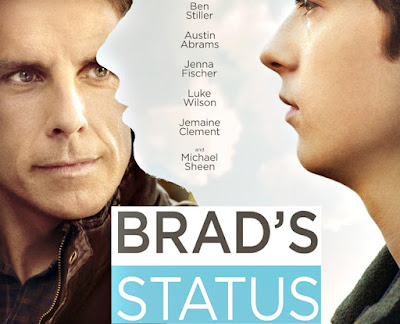 There are plenty of films about kids going to college and it’s usually the kids they are concerned with. If the adults get any attention at all its as nagging parents that the kids can’t wait to get away from. Viewing the development from the point of view of the parent is a refreshing approach and in the hands of writer / director Mike White painted with an honesty that side steps what you might expect.


Played by Ben Stiller, Brad is a somewhat paranoid self -loathing individual whose internal thoughts we’re privy to thanks to the actor’s voice over. Basically he worries about what other people are doing more than what he has to do and that he will never achieve his dreams. Some of his concerns are later revealed to have little substance or the result of an over active imagination. It’s a gift of a role for Stiller who brings to bear his considerable skills so that while we may empathise with Brad we won’t necessarily agree with his viewpoint. I’m not always a fan of voice overs which can imply that the narrative alone is not strong enough but here it works really well even when Brad is stating the obvious. Stiller’s voice is well utilised and when Brad thinks things like he may have plateaued in life you can recognise something. I’m sure a lot of us have had times on social media where it seemed like everyone else was having a better, more rewarding time than us. When we later find out the truth about these people’s lives it shows just how wrong an impression you can get from updates, profiles, Tweets etc. It’s a natural extension of this for Brad to try and fix his own son’s mistakes when a key interview is missed but then he starts to worry about his son eventually eclipsing him. 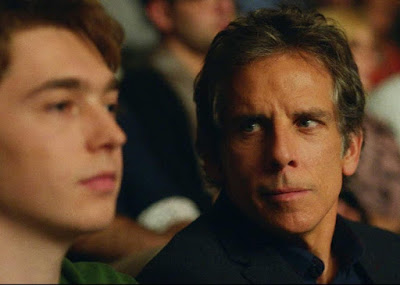 In some ways Brad has reverted to a teenager’s thought process whereby everything revolves around him and this emerges several times during what is a leisurely played drama in which not a huge amount seems to happen. Some may argue that what the narrative needs is more of a spur to drive it faster but this pace seems more realistic. The film is even more low- key than Brad himself often meandering and leading down side roads but always supporting its theme. Brad has to work out the truth for himself.


In support of Stiller there’s a perfectly pitched performance from Austin Abrams as his son; thanks to both actors you can believe they are parent and child. Michael Sheen turns up as one of those old friends who is genuinely baffled by Brad’s impression of his life. There’s a great performance too from Shazi Raja as a musician friend of Troy’s who take Brad to task over his attitude. Both she and Troy show how different the teenage outlook nowadays is to how Brad was as their age.


I suppose I was expecting some revelatory moment – or even some sad ending- but neither is forthcoming. Instead the narrative- and the film- settles on a conclusion that was obvious from the start. I imagine Brad will continue as he is but less paranoid now he has put to bed some of his wilder interpretations of old friends he’s not seen for years.

I don’t know if this is a film that will help anyone who feels similarly especially as Brad’s issues are all very first world problems as one characters points out to him. If he didn’t have a high flying son then perhaps this would be a very different albeit more conventional story. At the end this is not quite the film it sets out to be but a welcome, well played diversion anyway.