Lloyds - “You’re not alone…..”
Sometimes an advert will have more than one version and after a few months a shortened edit will be aired presumably to acknowledge that people do get tired of seeing the ad again and again. Other times there is a longer version and in the case of the current Lloyds Bank ad this is being shown only in cinemas. Lloyds adverts seem aimed to position the bank as the dependable friend of the family, an enabler to happy developments. Their previous ad played on the emotion of big events with a large horse running through slow motion events like the birth of a baby, a marriage proposal and so on. Of course if a huge horse really started to run about in a hospital it would be a health and safety disaster.

The animal has always been Lloyds’ symbol - their old ads referred to “the sign of the black horse” and the latest ad uses them again.  This time a whole village gets up early in the morning to head for the beach where a lot of horses are running along the shoreline. Naturally these wild untamed animals stop to nuzzle the villagers probably in the hope of some breakfast or at least a few oats.
Directed by Sam Pulling of Pulse Films, `The Running of the Horses` features twenty of the animals enhanced by additional CG horses created by effects company The Mill. Despite having shot previous ads in Wales, this one was actually filmed at Tomahawk Beach in Dunedin on New Zealand’s South island. It reinforces the theme of the bank’s recent ads as the advertising company who made it adam&eveDDB put it themselves showing that like horses Lloyds are  “powerful, dependable and there for every generation”. Lloyds staff however do not go for a dawn run along the beach each day as far as we know.
The film is soundtracked by a new version of the Olive song `You’re Not Alone` performed by Jennifer Ann (aka Astrea) something of a regular on advert songs having sung the well -known version of `Mad World` for a 2016 Lloyds ad as well as the version of `Everybody’s Free` that’s featured on Boots adverts.

Audi- “If I only had a brain…”
The latest Audi car creeps along in the rain in slow motion while a series of infographics show us just how many clever functions it is performing such as adoptive cruise control, interior climate control, drive select and adaptive air suspension. Like most car ads it is beautifully shot and edited, the slow mo rain looking particularly impressive. The choice of song is interesting as the car itself is just a series of technical and engineering operations; it doesn’t actually have a brain though the suggestion is the latest model is so clever it’s almost as if it does.
The ad by the London based agency BBH is directed by Alan Bibby who said: “I was instantly drawn to the concept from the moment I read the script – it’s the sort of challenge I find the most intriguing. Visualising the amazing, complex amount of calculations and decisions the Audi is making at each moment but in an elegant and visually compelling fashion.”
The music is a new version of the Wizard of Oz classic performed by a group called Faultline specially for the ad and unusually is not commercially available in its own right depriving them of the sort of boost those John Lewis ad singers get. Faultline is essentially producer David Kosten who makes albums of mainly instrumental music with occasional guest vocalists such as Chris Martin or Michael Stipe. This is the second Audi advert he’s soundtracked following a previous cover of `Send in the Clowns` with vocals by Lisa Hannigan.

PPI- “Make a decision- do it now!”
You can see why this advert making people aware of a final deadline for PPI claims was made; it is squarely aimed at the middle aged. Younger viewers may not even realise why there is a head trundling around urging people in broad Austrian to “make a decision- do it now!”. I’m not sure anyone knows why it bursts out of a shopping trolley! Even for those who are familiar with the man may puzzle as to the presentation. Why the head? What is it trying to tell us? Use your head? Why not have Arnie himself as the Terminator appearing to tell people to make a decision? Some may find the results unnerving, others may be baffled. Try and picture famous Arnie scenes and then imagine if they’d just used the animatronic head on tank tracks and not the full Arnie! 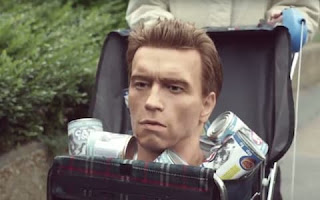 The campaign by Saatchi is believed to have cost £42m paid for by the banks and is apparently doing its job causing a large spike in the number of enquiries about PPI. It has also been called “disturbing” by some though at least it’s not as shocking as the first ad from last year in which disembodied Arnie popped out of a supermarket veg stall and seemed rather irritated if not dangerous.
The advert is part of an increasing trend for companies to hijack cultural icons for their own purposes- the likes of Scooby Doo, Thunderbirds, Skeletor, Top Cat and even Action Man have lately been deployed to sell things. At least it shows the long term future for the personalities young people today like. Imagine in 30 years’ time we’ll have the animatronic head of Justin Bieber reminding us about something or other.