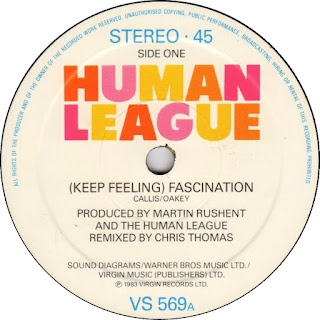 [16] The Human League: (Keep Feeling) Fascination. The video for this song starts with a great visual gag as an orange "you are here" dot on a map (hand drawn by the look of it, to avoid infringing Ordnance Survey copyright) becomes a real dot painted over a house, car, and road junction. It's an impressive piece of work. The paint smooths a lot of detail from the house and it ends up looking like something from a giant Monopoly set. The road junction is still there between First and Third Avenue (E13 8AR) but the house has long gone. You can see in the video that the whole area is boarded up for redevelopment. The graffiti on the wall behind the boys playing football reads LEB C/OFF (London Electricity Board Cut Off?) rather than the profanity I was hoping for when I hit pause.

[4] F.R. David: Words. Cripes, BBC4 have left in Janice Long's name check for J-n-th-n K-ng. They are usually very careful to cut out these references.
[18] Twisted Sister – “I Am (I’m Me). Back in 1983 I misheard the lyrics as "I am, I'm mean." Being an unsophisticated 11 year old I thought the idea of a group of hairy men proclaiming their meanness, while dressed as pantomime dames, was hysterically funny.  Now, a with little bit of hindsight -and knowing the correct song title- I don't find Twisted Sister quite so rubbish. They put on a good show. The lead singer head bangs away furiously as if he's trying to shift a particularly stubborn nit colony, and the crowd have been told to pump their fists; which they do, uncertainly and self-consciously, and with the traditional Top of the Pops audience inability to keep to the beat of the song.
[19] Toto: Rosanna. Toto are back with a song that "really scooped the Grammy's" I didn't even know they had category for blandest song. For reasons that never become clear this promo film is about Toto performing behind a fence at some sort of post-nuclear laundry. Mercifully Top of the Pops cuts the film short before the synthesiser solo really has a chance to kick in.
[31] Heaven 17: Temptation. Like me you might remember this song from the 1992 remix. Which puts me in the odd temporal position of watching a repeat from 1983, and finding it reminds me of something which hadn't happened yet when the programme was made.
[21] Thompson Twins: We Are Detective. On video, because they are touring America according to Janice Long. 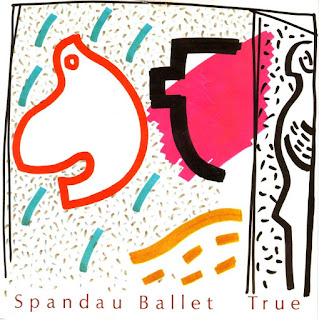 [10] Spandau Ballet: True. And here it is. The song that would go on to be a million first wedding dances. It's a wonder the audience don't just spontaneously pair up and start slow dancing. Now that we've had this, and Come On Elieen, we only need Opposites Attract by Paula Abdul and we can wrap the eighties up and mark them done.
[1] David Bowie: Let's Dance. Still on film.
[3] Michael Jackson: Beat It. Top of the Pops closes with the audience dancing to Michael Jackson's latest hit.
Posted by John Connors at 23:26