Who lives in a TikTok House?

Decades ago people thought The Beatles lived in a house together because they were seen co-habiting in one of their films. More recently the contestants in series like The Apprentice or The X Factor shared a house yet only for the duration of whatever reality show they were in. Now though social media influencers are actually properly sharing a house all in the cause of TikTok. If, like Claudia Winkleman and I, this platform is something you view with bewilderment or whether you are TikToking away regularly the idea of actually moving in with fellow TikTokers seems a bit bizarre. It’d be like deciding to live with five other people you work with. 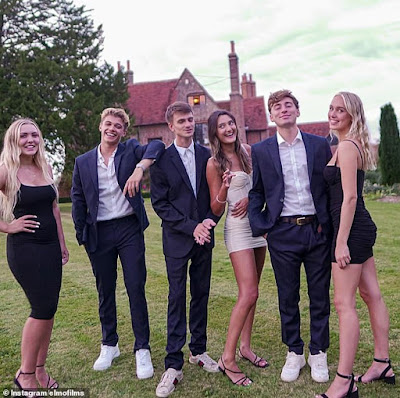 The idea of social media celebs living together is not entirely new. There were shared creator houses as far back as 2014 when US based YouTubers would live and work together in places like the O2L Mansion, 1600 Vine Street, Clout House and Studio City. Over here most of The Sidemen lived in a large country house. The first TikTok house was launched last December in the States and called the Hype House in which what looked like an army of TikTokers- nineteen in total – shacked up in a mansion to create content like some hippy commune from the Sixties. Only cleaner. Hype House was the idea of seventeen year old Chase Hudson and twenty one year old Thomas Petrou.

In fact only four of the group live there full time, the others come and go presumably because there is no toaster large enough to deal with so many people. The house is a Spanish styled mansion at the top of a hill in Los Angeles and includes a pool, large backyard and a massive kitchen. The collective accrued more than three million followers in just ten days after their launch.

Surprisingly this is not the all hours party house you might imagine instead running on quite a strong work ethic including a rule that you must create daily content. The concept is that having other creators around you will in turn inspire you.  “Elevate others to elevate yourself’ is a popular saying amongst the cognoscenti though the more practical quote “from a management perspective, it’s great” might be more of a driver. Since the Hype House launched others have followed suit. 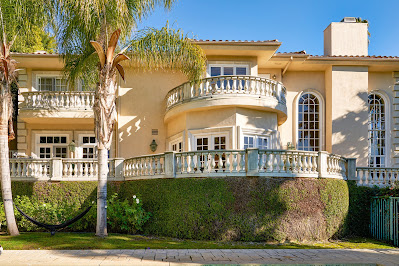 The Hype House, LA. Reminds me a bit of where I live, actually.


Now the phenomena is here in the UK and there’s even a name for these people- Brit-Tokers. These groups call themselves a Collective which sounds like something from Karl Marx! I’m not sure it’s all growing crops though. The first the likes of myself heard about all this was in September when several of these individuals moved into The Wave House a £3.5 million seven-bedroom red-brick house sat in thirteen acres of grounds and including a swimming pool, gym, cinema room plus a 100-inch TV which cost almost £30,000.

Amusingly the group chose to wear jewel encrusted face masks initially revealing each of their identities day by day. You’d imagine this was because they were awesomely famous but in fact my theory that the Wave House was occupied by the likes of Barack Obama, Lord Sugar, Dame Maggie Smith and Madonna turned out to be a teeny bit wide of the mark. I don’t want to come across like the sort of person who each year when celebs are announced for tv shows goes “I’ve never heard of any of them” because I often have but in this case I was left blank. The six are Millie T, Eloise Fouldager, Spencer Elmer, Jimbo H, Kate Elisabeth and Carmie Sellitto.

All is not quite what it seems though. A management company called Yoke actually owns the house and the six are under no obligation to stay there if they want to go home at any time “The whole idea is a place of work, but they do live there. The costs are all covered by the company, if they want to go home, they can”, said Jidé Maduako, CEO of Yoke. So its more like a group of people living in their office.   Whatever it is seems to work at the moment. Despite being a relatively obscure group of influences compared to the best known YouTube names, the six managed to rack up over two million followers and gain over 18 million likes in less than a month so someone is interested in them.

The Wave House now has over 3 million followers and more than 37 million Likes. It’s not all frivolous stunts like filling a room with clothing pegs or renting a tank as there are items about serious issues like mental health or period pains though their longer videos still have to be posted on YouTube due to TikTok’s one minute limit. Before they publicly launched the group invited an Evening Standard reporter to spend a day with them and at the comparatively ancient age of 29 he was instructed how to do “the Woah dance” “It’s right hand down, left hand over, wiggle, punch your shoulder,” he was instructed . “No, right hand down. Right.” Don’t try it at home unless there are thousands of people likely to watch it. 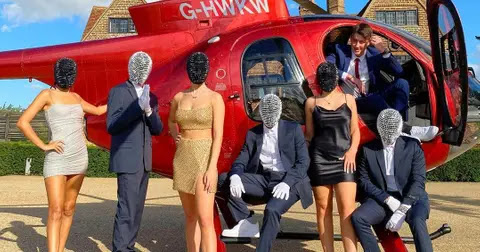 And this is what the Wave House TikTokers really look like...

Inevitably the influencers have had some criticism from followers of their previous channels who don’t seem to like change and even branded them “hypocritical” for the move. Carmie Sellitto addressed this in a recent video saying  “I finally have structure to my life….I’m trying to do something with my life, and now people are hating on me because I’m changing.”

Despite such angst it can be a lucrative existence with each of them estimated to earn at least £100,000 per year from this cavalcade of dances, stunts and pranks. The only thing that could stop them in the short term is burn out, as has happened to many established YouTubers over the years. Having to create endless content, coming up with ideas, maintaining a perky personality on screen- these will all lead sooner or later to fatigue. Former social media influencers have talked about losing their sense of self and many have developed their careers in more conventional media like television, publishing, stage performance or even modelling. Most of us who have a job also have a separate life away from that job but when it is all mashed together it is not always easy to handle. None of the coverage of these houses mentions whether the groups have regular access to advice and help or if they sometimes just go home for a break. In the ES feature Millie T does acknowledge this aspect of things; “…There’s a pressure as well. You have hundreds and thousands of people to please, brands to please too. Maybe when it comes to filming you’re not in the mood. It can get to you.” In the longer term their audience will grow up and move on- the shelf life of a social media influencer can be even shorter than that of a pop star or footballer.

If the Wave House was inspired by The Hype House then it has itself inspired others. In October the Icon House was launched in a very similar manner slowly revealing its inhabitants who include reality tv people, models and even a footballer. In contrast to the ornate masks worn by the Wave House group, this lot sported balaclavas looking more like a group of bank robbers than anything. As all trends eventually pass up the age groups I wonder if in a few years we might see something like the House House wherein six MPs all live together doing Parliamentary stuff. Or maybe the Cooks House where a group of chefs co-habit and rustle up thirty second TikTok menus.

It may be that in this strange time of the Covid 19 pandemic with its relentless social distancing rules that probably affect younger people even more than most these houses provide a sanctuary from the harsh world beyond. It will be interesting to see how long they stick together when pandemic restrictions are eventually relaxed and there is more social freedom outside a collab house than in it.

Still these houses continue to grow- a website recently listed twenty seven of them – as TikTok becomes increasingly prominent. Its rise has alarmed some governments due to the fact that it originated in China and conspiracy theories abound about it actually being a cover for mass spying. If it is then I’m not sure quirky dances will satisfy the Chinese Surveillance people much. Unless they plan to conquer the world through interpretive dance!

In the end it is the latest, but not likely to be the last, online phenomenon that does what musical trends used to do and separates the generations. Even YouTube and Instagram look old now and who even remembers MySpace? You do wonder though just how much shorter entertainment can get. Or are we are even headed the other way? After all there used to be a similar platform called Vine which had clips of seconds alone. The longest a TikTok can be is sixty seconds. Surely there’s some editing to be done there!