The Mark of Archanon
A more thoughtful and considered episode akin to much of season one, `The Mark of Archanon` sees a rare exploration of the lunar underground by Alan Carter and hitherto unseen mate Bluey (who turns out to be called Johnson so I’m not sure where the nickname comes from). Quite why a pilot is undertaking this particular expedition is as odd as why Koenig and Maya have taken an Eagle to go on a space exploration- surely these tasks should be swapped? Perhaps they just decided to have a Do Something Different Friday. Anyway what Carter and pal find are two frozen alien beings who turn out to be alive. The viewer will have known that already as we spot them swaying while trying to stay still. 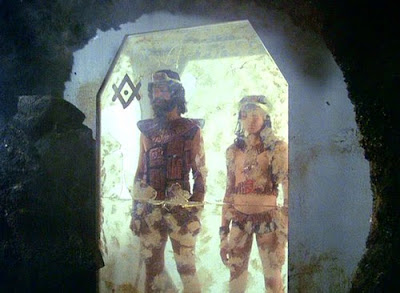 The figures turn out to be a father and son called Pasc and Etrec of the Archanon race dubbed `Peacebringers`. Only there is a sickness they can catch, the killing sickness, which turns them into raging murderers. So Pasc is doing his best not to kill anyone while Etric is likely to shortly develop the illness.  What transpires is as close to tender as this series got  as the script – by Lew Schwartz - takes some unexpected turns and is much more intriguing than the usual aliens on the base scenario. Along the way we dip into medical ethics, father / son relationships and questionable hairstyles. I imagine the designers were thinking classical Greek when they came up with the Archanon look but those barnets are styles to be avoided even in the big haired Seventies!

This is another strong episode for Barbara Bain and also for Nick Tate who has been somewhat underused this season. His continued arguing with Koenig has disappeared in the second run and here we get to see the matier, Aussie side of the character as he bonds with Etrec teaches him about rugby and calls him “cobber”. It’s clichéd TV Australian rather than the real thing but is refreshing for both the character and the actor to get something to chew on.

The denouement is rather sad really and ultimately paints Pasc in a different light. John Standing brings some gravitas to the role which is refreshing after this season’s roll call of over the top antagonists. And you’ve got to like an episode which explains a big anomaly that we’ve all been considering regarding why the Archanons don’t try to treat this virus. Turns out they do but the blood transfusion kills the donor- the ultimate killing of oneself. Admittedly the bar is not set that high but this is the best episode so far of the second season. 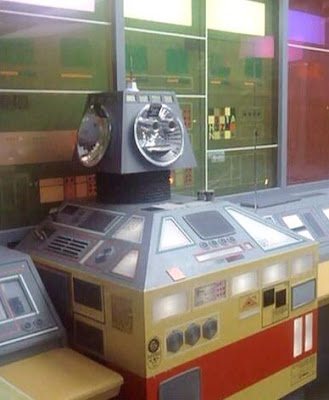 Brian the Brain
With a title like  that expectations might be low for this episode yet it turns out to be a well- paced and involving story from Jack Ronder. When Alpha appears to be off course and the crew investigate a possible cause they unexpectedly encounter an old earth ship called a Swift and on board a chattering square robot with the personality of a very irritating human. Seems he is the only survivor of a lost mission from 1996. Considering this happened just three years before Alpha’s own calamity you’d think someone might recall it and indeed the make of robot but they seem non plussed and talk about it all as if its ancient history. Anyway we can overlook that because what transpires is a well composed story about a lonely quite insane robot with the chipper voice of Bernard Cribbins and the intention to travel the Universe forever utilising the fuel from the crashed ship he originates from. To do so it tricks Koenig and Helena back on board before kidnapping them using an arsenal of tricks to keep them compliant.

Brian itself may seem a bit clunky at first but soon builds into a real character thanks to the chirpy voice with its casual threats as we are left with no doubt as to the power of this machine and its willingness to do anything to achieve its aim. This in turn is helped by the surprisingly expressive face considering it is just metal and lights. In one stand out sequence it forces John and Helena to each stand in an airlock from which the oxygen supply is slowly withdrawn. Unable to communicate each has the option of channeling the remaining air to the other allowing them to survive. In the end they press the switches simultaneously!

This is one of several scenes where director Kevin Connor proves to have a strong sense of what can raise the atmosphere. Another is Koeng’s solo journey on the surface of the mysterious Planet D –which for a change we don’t really discover much about – to get to the crashed ship. Excellent visual effects allow the actor to move slowly while surrounded by yellow mist, bare trees and some effective music. It seems more like a forward thinking pop video at times and far classier than this series often manages. It makes the use of a limited sized set to deliver something memorable.

It is true that Brian’s demise sees the writer overlook all those powers the robot previously displayed by showing him his creator- Cribbins again- as portrayed by Maya but it proves the robot’s human attributes are coming to the fore.