How to Build A Girl review

The trick to making a film about a writer is to visually enhance it or else you end up with too many scenes of people sitting at keyboards. This boisterous adaptation by Caitlin Moran of her own novel succeeds triumphantly in doing so with the superb direction of Coky Giedoryc and a sparkling cast to bring this “true-ish” story to life. In the Eighties bookish sixteen year old Johanna Morrigan yearns to escape her humdrum life in Wolverhampton where she resides in a noisy, crowded house and finds solace in great figures of the past. Pictures of them adorn her bedroom `God Wall` and spring to life to offer advice from their historical perspective. On the suggestion of her fanzine making music loving brother Krissi she expands her horizons into popular music about which she knows nothing and starts submitting gig reviews to one of the big music papers. When the staffers dismiss her polite scribblings she re-invents herself as Dolly Wilde, an outrageously styled critic who has no mercy. 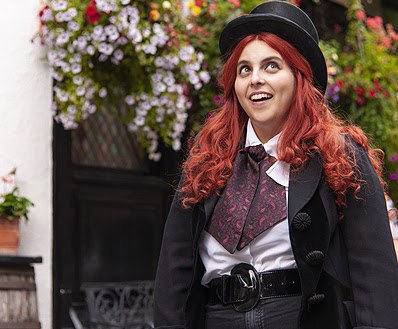 The film is a hugely enjoyable treat from the start. It has echoes of Almost Famous yet approaches music journalism from the female perspective uncovering a misogynistic laddish culture with few women at its heart. To make her way into this world Johanna’s alter ego Dolly Wilde (named after a niece of Oscar Wilde) writes harshly worded reviews slicing through young group’s aspirations with a killer sentence or two. I remember reading this sort of thing in the likes of Melody Maker and NME back then and it is incredible to think how much influence this small cadre of writers had on people’s careers. Yet despite the attitudes and behaviour on display the film also makes that life fun, building on the contrast between the everyday aspirations of Johanna’s father and the glitz of her alternative life. Her top hat, tails, tights and red hair image is as strong as any rock star and before long Dolly is feted by her peers, has fans of her own and becomes increasingly detached from her family. The moment that personifies this is when we see the writers on a rooftop sampling new singles and chucking those that do not pass general approval into the air to be shot to pieces with a pellet gun. It is this fate that awaits Johanna’s own father’s latest attempt to break into the business- and Dolly has to pull the trigger. 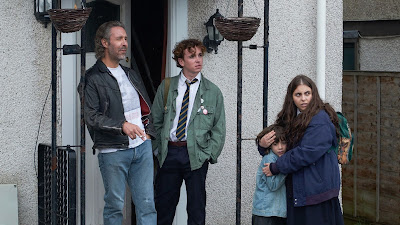 Beanie Feldstein gives a bravura, fearless performance in the main role, her transformation from needy, enthusiastic, yet naïve Joahanna to bolshie, devil may care Dolly is astounding yet also tinged with sadness as we see the person she really is vanishing bit by bit. It’s a role the actor seems to cherish, able to convey the feelings of the real Johanna sometimes peeping though the bitchy façade. As her wannabe rock star father Paddy Considine maintains an optimistic vibe throughout and you really have to feel sorry for the character. Sarah Solemani is equally good as the stressed out mother coping with unexpected new twins. Despite her tiredness you can see the echoes of the closer relationship mother and daughter once had. Laurie Kynaston is great as Krissi whose deadpan yet heartfelt attempts to keep his sister grounded anchor the real life she seems to be leaving behind. The disappointment on his face as she changes is clear. As rock star John Kite, Alfie Allen shows he’s not the only member of his family with singing talent (courtesy of a new Guy Garvey song) while his portrayal of an idol with a sad past is put over at just the right level. The lengthy scenes between John and Johanna never play out quite as you expect refusing to confirm to the movie stereotype of rock star befriending journalist.

Whether in the melee of the live music scene, the noisiness of the music paper offices or the domesticity of the home the film has just the right level of authenticity never relaying on over dramatic scenes to make its point. It avoids being judgemental from a modern standpoint where the sort of sexist behaviour we see would not be tolerated simply showing it instead and allowing Johanna to respond to it in her way. 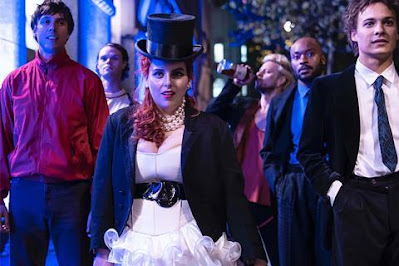 The visually striking imaginary sequences are well balanced to allow us expanded access into what Johanna is thinking. The film is also frequently funny sometimes when you least expect it to be. Crucially the viewer continues to like Johanna even when she is mining the worst excesses, a testament to the writing, direction and Beanie Feldstein’s layered performance. Over the course of the film I grew to like all these characters so much I wanted to see more of them and that’s a sure sign of success.

Of course the times that are depicted here are long gone as indeed are the all-powerful weekly music press yet for all their faults you do get a sense of a heady time into which anyone could be seduced and become someone else. At the end Johanna starts a job at The Face magazine whose minimal white contoured office is so at odds with the paper strewn messiness we’ve previously seen you can see the future hurtling towards us.

How to Build a Girl is more a manual of what not to do than a study of a role model but it is a vibrant, enjoyable and funny film that will strike a chord with different people for different reasons. I can’t recommend it enough! I wonder how Dolly Wilde would review it!