His Dark Materials S2 - The City of Magpies review

The opening episode of this second season is something of a slow burn affair which courtesy of a lengthy prologue and a whole new locale might bombard newcomers with just a bit too much information. The issue with the lengthy reprise at the start is it tends to overwhelm the viewer in one crowded rush. Better to gradually call back than dump it all at the start I’d say especially as the episode is slower than most were last year and therefore could have been designed to contain flashbacks at different junctures. Some of the clips included are not particularly relevant to this episode so could have been left aside altogether. The one key thing the scenes don’t really show is the full horror of what happened to Roger and why which informs Lyra’s mood as the second series dawns. The episode boasts high production values with the impressive city set as well as plenty of airships and a speedy attack on the Magisterium’s submarine but is generally light on action and more focused on atmospherics. 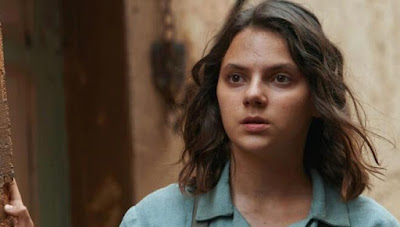 We are soon following a twin narrative partly set in the city and partly with the pursing Magisterium. The latter’s unwillingness to even acknowledge what is now visible to all is a timely take on religious and political figures similar behaviour in the face of change. Tonight in particular I imagined a certain Mr Trump discussing with his advisors how that election result simply did not happen. News management is of course more problematic when there’s a huge column of light in public view! Mrs Coulter’s pragmatic approach seems to win out in the end. By the way I love the way this scene plays with the priests arguing for some time before we realise she is in the room.

Whether amongst the cramped streets or inside the Magisterium’s submarine (which seems to deliberately look Russian) the atmosphere remains tense. So the clicking of a pair of tweezers becomes an intimidating gesture even before we learn what it will be used for. In the actual second novel Mrs Coulter is left in the background but it would have been unfortunate to have done so with this production given Ruth Wilson’s incredible performance in season one. We don’t have to wait long for the nasty side of the character this time as her interrogation of a captured witch is packed with menace. She is so good at turning from charming to brutal in a moment and this is more proof that she is one of the most dangerous villains in recent tv history. She’s also continuing to use her wiliness to influence the Magisterium especially with Father McPhail – Will Keen is a great foil for Ruth Wilson who’s Mrs Coulter remains a chilling individual even scarier than she is in the books.

Ruta Skadi’s lightning fast charge into the submarine to put the prisoner out of her misery raises one question. How come she just whizzes past Mrs Coulter but moments later delivers a near fatal blow to the Cardinal? Perhaps this is something we will later learn. No doubt though that Jade Anouka certainly makes a powerful, dazzling entry into the story.

Jack Thorne’s adaptation is lithe in it’s storytelling, balancing all this `previously` talk with a less frenetic scenario in which Lyra and Will explore the seemingly abandoned city of Cittagazze, first separately and then together. It’s a Spanish looking place with narrow streets and high brightly painted buildings crammed together on the side of a mountain and director Jamie Childs takes them (and us) around it’s labyrinthine alleyways while the incidental music percolates underneath. Nobody seems to live here except less than polite children (the `magpies` of the episode title) who steal and talk of spectres taking away adult’s personalities. Not a lot happens yet it is engrossing because you can tell they’re building towards something. 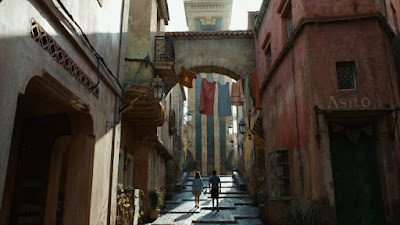 Lyra and Will’s interaction is cautious, even edgy and well played by the actors with both of the characters holding back key information from each other as to why they are here. They do bond though on discovering a shared home town even if they are Oxford in different worlds. Dafne Keen has a marvellous serious face even in scenes showing Lyra’s lack of etiquette when her fried eggs are a disaster! In this sort of scenario it is unusual for the boy to have set up a temporary home and taken care of the domestics while the girl remains unwilling even to have a shower!

There are a couple of mysteries building. What exactly are the Spectres whom we see towards the end represented by slowing smoke? I wasn’t overly impressed by this look only because its something I’ve seen in many other productions though the way it loomed behind Will at the end provides an excellent cliffhanger. I suppose we’ve been spoilt by CGI effects now. I did think that the catatonic adult the kids found by a well was a better indication of how terrifying these creatures were. Perhaps it would have been better to have encountered several other zombie like people around the city?

There is a sense that the situation has been flipped with adults disappearing instead of kids and what happens to them sounding similar to the traumas of being separated from deamons shown in season one. Then again this is a narrative built on parallels so that seems right. The other mystery is what is in that tower which seems to give off a buzzing noise of the sort you hear if you walk near electricity pylons. Overall this is an opener which may struggle to absorb those unfamiliar with either the first season or the novels yet there is enough here to suggest the second season will be as good as the first.