A low key but frequently tense episode is packed with a certain amount of exposition that some may find drags but which does a good job in expanding the storyline and squaring some circles. With last week’s cliffhanger unresolved- just what did happen with that looming Spectre?- Will takes Lyra to his Oxford for an extended trip that sees them become more proactive trying to solve the mysteries. On the advice of the alethiometer Lyra finds a “scholar” courtesy of the picture on her office door.

SPOILERS BEYOND THIS POINT... 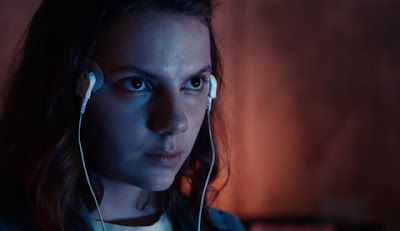 She is Mary Malone whose study of dark matter turns out to be in effect a study of Dust. The portrayal of scientists in tv fantasy shows is littered with eccentrics and their tics so it is reassuring to find one who seems completely normal and curious as to what this strange girl has to tell her. The scenes they share seem to naturally bring out some links between their two worlds culminating in an experiment wherein the dark matter Mary has previously found to be slightly responsive to her starts sending pictures when Lyra is hooked up to the computer. It’s a nicely understated performance from both actors; Simone Kirby is very believable as Mary.

In contrast, Will’s storyline seems a little less interesting as it concerns the police, lawyers, grandparents and money which comes across as more conventional. Being so earthbound, Will’s storyline feels rather leaden – not the actor’s fault - compared to Lyra’s flights of fancy and intrigue. Perhaps, too, because his appearances in the first season were comparatively brief, we don’t really know as much about Will and so his character seems less involving.

Still I do feel the chemistry between them is percolating really well and not in an obvious way either. Two young leads falling in love would be such a well trodden road to travel at the moment; better for them to get along with some mistrust and some confidences as they do.  You even get a bit of light comedy as Lyra selects suitable outfits for Will's Oxford. The parallels between both their worlds (like the aletheiomer being compared to a smartphone) are well drawn as they discover more. Parallels seem everywhere really- such as Doctor Malone being a former Nun but having rejected the Church being revealed in an episode where we are also watching the bad deeds of the Church in Lyra’s world. 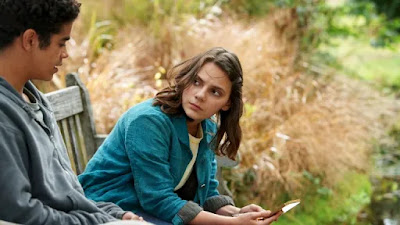 Playing alongside these excursions are the ongoing power struggles within the Magisterium. This is always presented with superb solemnity and all the flourishes of the Vatican. Long robes, dark chambers and secret ballots are the order of the day. The edginess amidst the ceremonial is clear though some viewers have found these scenes a little drawn out. I suppose as Lyra and Will’s storyline is somewhat slow too it makes the episode as a whole seem longer than it is. Yet these are necessary story points I feel and it is important with something like the Magisterium to give some colour to the proceedings otherwise it really would just be a lot of solemn men in robes. Will Keen in particular gives a very controlled performance that offers windows into a deeper character.

It is also fun to learn of the extent to which Mrs Coulter is using these religious men and their processes to achieve her aims. When it ultimately turns out that Mrs Coulter has been manipulating them you have to admire her tenacity and Ruth Wilson has a marvellously pleased expression on her face as she walks out of shot at the end. Ironically in such a medium paced episode one scene in which Thorald imparts some crucial information seems rushed and perfunctory. Why did it even take this long for Mrs C to ask him?

Anyone tiring of talk, ceremony and science is advised to stick with the episode till the end when the newly installed Cardinal McPhail lets loose a lethal barrage on the Witches. He’s not there himself of course so we cut between the serious Magisterium vote and a fleet of airships dropping the alternative world’s equivalent of Napalm as a horrified Serafina watches. It’s a Sin admits McPhail but a necessary one.