Reviewed by Chris Arnsby. Janice Long: “Hello. Nice to see you. It's Top of the Pops.” Simon Bates: “Hello, welcome, it's Elton John's video a little later on but we've got a cast of thousands over here. Have a look. Feargal Sharkey and A Good Heart at number twelve.”

[12] Feargal Sharkey: A Good Heart. I've written before about my pathetic claim to fame, that in 1997/98 I worked in an office* next to Feargal Sharkey. (John- Was he just stood outside the building then? Or was there a Feargal Sharkey Office dealing with the world’s Feargal Sharkey things?) I would once again like to apologise for the fact that he had to work in the vicinity of a room full of ignorant 20 year olds who knew nothing of Teenage Kicks, or The Undertones, but who used to quietly sing A Good Heart in quavery voices after he'd been spotted in the lift. Tonight, Halloween the most evilest night of the year, Simon Bates can only speak the truth. Feargal Sharkey's stage is indeed packed; there's Mr Sharkey himself, three backing singers, a keyboard player, two drummers, and a saxophonist who appears to have jammed a torch down the bell of his instrument. 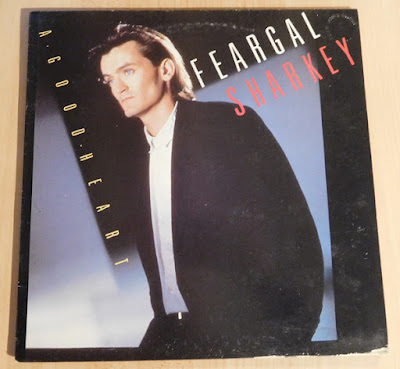 Feargal's three singers seem unsure of their dance routine. Most of the time it goes
“A good” : raise right hand in the air, palm facing outwards.
“heart these days is hard to find”: cross hands over left side of the chest (MEDICAL POP-FACT, not the location of the heart).
“True love” : turn to stage left, make a choo-choo train gesture with your arms and roll your hips.
“the lasting kind.” turn back to face the audience and pull your hands in to your hips. (John- Wow, you’ve just described our Security Dance at work!)
However, intermittently on the “hard to find” lyric one of the dancers will add a hands-above-the-eyes-searching gesture. In the days of Flick Colby's choreography this inconsistency would not have been tolerated, and further rehearsal would have been mandatory.
[4] Elton John: Nikita. On video. Elton John's passport photo clearly contravenes all the rules; he's wearing a hat and sunglasses, he's not looking at the camera, the background isn't plain, and he doesn't have a neutral expression. No wonder he's not allowed to enter East Germany.
[17] Matt Bianco: Yeh Yeh. The band have restructured. There's now only four of them, down from six when they performed Get Out Of Your Lazy Bed in 1984. The real star is the bongo player in the background who looks incredibly serene and centred through the whole performance.
Top 40 Breakers: [23] Siouxsie & The Banshees, Cities In Dust; [20] Kate Bush, Cloudbusting; [19] UB40, Don’t Break My Heart. 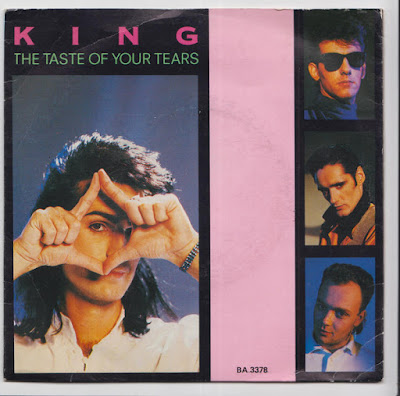 [15] King: The Taste Of Your Tears. There's something faintly repellent about calling a song The Taste Of Your Tears. I could do without the mental picture of Paul King running his tongue over the sobbing face of his significant other; and now I've shared that image with you. Sorry about that. This is a slower track than the other King songs, and it doesn't really suit Paul King's dancing style which is all angular movement, and exaggerated poses. You can tell he really wants to cut loose, but instead he has to make do with some limited tambourine action.
Top 10: Simple Minds, Alive & Kicking; [9] Level 42, Something About You; [8] Jan Hammer, Miami Vice Theme; [7] Arcadia, Election Day; [6] John Parr, St. Elmo's Fire (Man In Motion); [5] Madonna, Gambler; [4] Elton John, Nikita; [3] Colonel Abrams, Trapped; [2] A-ha, Take On Me.
[1] Jennifer Rush: The Power Of Love. A repeat from the 17/10/1985 edition.
[11] Shakin’ Stevens: Lipstick, Powder & Paint. “We're going to dance now, aren't we?” asks Janice Long of Simon Bates. Sadly the camera pans away before we can see who leads in that pair, and by the time the camera returns they are long gone through one of the secret DJ exits. Leaving us with the normal audience dancing and credits.

Performance of the week: Feargal Sharkey, A Good Heart, once again I'd like to take this opportunity to apologise to Feargal Sharkey, his family, friends, and any of his legal team who may be reading.