Reviewed by Chris Arnsby. Dixie Peach: “Good evening and welcome to another edition of Top of the Pops and tonight, as usual, we have a great line up for you. Live in the studio we've got Jan Hammer and Level 42.” (John- Slight contradiction there, Dix, mate)  Mike Smith: “And we start tonight with a man who's been living for this night ever since he was a kid, will you welcome with St Elmo's Fire at number six, John Parr.”
[6] John Parr: St Elmo’s Fire (Man In Motion). Tonight's Top of the Pops (retrieved from the Sutton Hoo horde https://mega.nz/folder/h0snQACa#uiNNqosfbdrfzODHsE1clw) is quite bad for the eyes. It's a digital conversion of an off-air VHS copy. It turns out that if you want to be really cruel to an MPEG encoder you should force it to convert something with massively variable light levels, rapid camera moves, and lots of smoke and fine detail. (John- Honestly I have no idea what he is talking about here!) Throw in Mike Smith's suit, charcoal grey with a sort of tartan pattern overlay, and a VHS tracking error at the bottom of the screen (how nostalgic), and it's probably a miracle this edition exists at all; frankly I'm amazed it wasn't rejected by the internet. 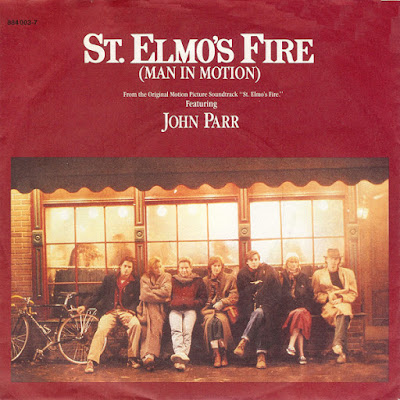 This edition sets out it's eye-straining ambition right from the start. Mike Smith is positioned in front of a rotating light pole which virtually whites out the screen every few seconds. Its how I imagine the Radio 1 Roadshow would look if it was broadcast from Bishop Rock Lighthouse in a thunderstorm. Speaking of bad for the eyes (what a link, I could do That's Life), I didn't know it was possible to perm a mullet but John Parr has found a way. I'm also not a fan of his knee-length, draped fabric white jacket. But it is 1985. Miami Vice was quite popular, as we'll see later.
John Parr's guitar is decorated with the Union Flag. It's an odd, out of time affectation. Ten years later it would be ironically cool and probably wielded by Geri Halliwell, if she could get it away from Noel Gallagher, but in 1985 I don't recall the flag being used like this; however Google Images brings me pictures of John Parr holding a Stars and Stripes guitar, and a Maple Leaf one so presumably it's the thing for which he is famous. (John- So what actually is St Elmo's Fire then?)
[14] Arcadia: Election Day. Producer Brian Whitehouse breaks with the normal format and substitutes another studio performance in what would normally be the video slot. Presumably it was quite a big deal to get (one of) the Duran Duran spin-off group(s) to appear live in the studio. Full disclosure, I have no memory of this single and I didn't learn about the Duran Duran connection until afterwards. Arcadia have a light Goth styling (spiky hair, long black coats, and slow, mannered movement) and the overall effect is as if The Pet Shop Boys shared a tour bus with The Damned, and in the confusion of getting ready one evening everyone put on the wrong costume, and Chris Lowe got swapped out for Rat Scabies. 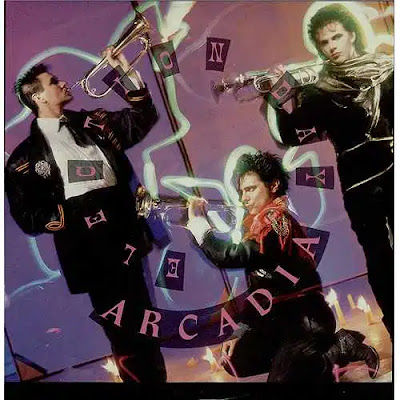 [5] Jan Hammer: Miami Vice Theme. “Now to a guy who's flown in from America especially to be on Top of the Pops tonight.” Really? I hope he didn't fly in just for this. Maybe also he also appeared on Saturday Superstore, or played the theme tune at the start of Finders Keepers with Richard Stilgoe. I don't like the idea that Jan Hammer flew across the Atlantic for this because the first shots of him struggling to play the keyboard look like the punchline to a Seinfeld bit about George Costanza lying about being a musician. It's a relief when Vision Mixer Priscilla Hoadly cuts to clips from MiamI Vice.
Top 40 Breakers: [24] Matt Bianco, Yeh Yeh; [23] Echo & The Bunnymen, Bring On The Dancing Horses; [20] King, The Taste Of Your Tears.
[13] Level 42: Something About You. Mark King hoists his guitar right up under his shoulders, and I am distracted by the way it makes his torso look tiny.
Top 10: [10] Red Box, Lean On Me (Ah-Li-Ayo); [9] Elton John, Nikita; [8] Midge Ure, If I Was; [7] Simple Minds, Alive & Kicking; [6] John Parr, St. Elmo's Fire (Man In Motion); [5] Jan Hammer, Miami Vice Theme; [4] Madonna, Gambler.
[3] Colonel Abrams: Trapped. Congratulations to Dixie Peach for being the first Top of the Pops host to pronounce Abrams correctly.
[2] A-ha, Take On Me.
[1] Jennifer Rush, The Power Of Love. A repeat performance from the 10/10/1985 edition.
[29] Thompson Twins , King For A Day. Audience dancing and credits. Simon Bates and Janice Long are hosting next week. The picture flicks at the end of the credits as our home taper stops recording and resumes on a different edition, and suddenly just for a second we get a preview of a future Top of the Pops. There's Janice Long, but who's Paul Jordan?