Guest post by Chris Arnsby
BBC4: Top of the Pops 1980 10/04/1980
Simon Bates, [probably talking to the Continuity Announcer]"...Thank you sir. And welcome to Top of the Pops with Liquid Gold."
The Undertones: My Perfect Cousin [43]. Tonight's signature effect; the screen is divided into quarters. You'll be seeing it a lot. It's used in a very stylish way to introduce The Undertones. The picture is frozen in one of the four windows on each strum of the electric guitar. It's very clever. This is not The Undertones greatest song but I really like the chorus. "Oh my perfect cousin/What I like to do, he doesn't/He's his family's pride and joy/His mother's little golden boy." It always sounds to me like there are whole worlds of family arguments packed into those four short lines. 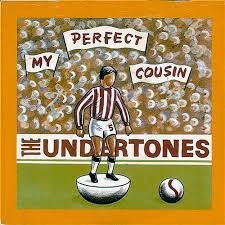 David Essex: Silver Dream Machine (Part 1) [19]. Oooh! Part 1 is it David Essex? You vain man. This is, presumably, the official video to the theme to some dreadful motorbike film starring David Essex himself. Lot's of footage of Silverstone (probably), and some ropey close-up shots of David Essex in a motorcycle helmet pretending to ride a bike. The biggest surprise is the giant sign advertising the Marlboro British Grand Prix. I'd forgotten how normal cigarette advertising used to be.
Dr. Hook: Sexy Eyes [4]. Legs & Co take this one which spares me from having to look at the scary lead singer of Dr. Hook. The quarter screen effect is used to deliver a giant close-up of one of Lulu's eyes. But just the one. A close-up of both eyes would be too sexy.
Saxon: Wheels Of Steel [37]. Saxon are all right, but never mind that. Before the song starts the BBC goes screen quartering crazy. At the end of Sexy Eyes we have Simon Bates in the top-left quadrant; a frozen still of Legs & Co occupies top-right and bottom-left; and bottom-right is further divided into four more quarters (top-right and bottom-left is Lulu full face, top-left and bottom-right is the big close-up of her eye). This makes a grand total of two single sexy eyes and eight quarters. Take that fractions! And take a bow Vision Mixer Carol Abbott and Dave Chapman on Electronic Effects.
Sky: Toccata [46]. The introduction to this song is interminable. A whole minute watching the keyboard player noodling away and smirking to himself. "Look at me," he's thinking,"I'm playing classical music on Top of the Pops! I bet I'm forcing the kids to re-evaluate their whole approach to music." Meanwhile entire ice ages have passed and the bloody song still hasn't started. When it does start it's as bad as you'd expect rocked-up classical music to sound. The best bits sound like off-cuts from Jeff Wayne's War Of The Worlds. At least the drummer looks like he's having fun. The rest of the band nod their heads and smirk and the Smugometer goes into the red zone.
Judas Priest: Living After Midnight [12]. Hard Rock Hallelujah. A repeat from Peter Powell's 27/03/80 edition.
Siouxsie & The Banshees: Happy House [17]. Another repeat, this time from 13/03/80 .
Sad Café: My Oh My [24]. Three repeats in a row. This one was from 20/03/1980. It would have been tidier if the three repeats were in date order.
The Bodysnatchers: Let's Do Rock Steady [22]. Halfway through the song the visibly bored drummer turns round and starts conducting the band. Then she stands up and starts dancing. Fine, so the band are miming, but that's no reason to make a mockery of Top of the Pops. You won't get very far with that attitude young lady.
Buggles: Clean Clean [45]. An utterly incomprehensible introduction from Simon Bates (something about auditioning for a late night horror movie on BBC2) leads into a Buggles song which better than The Plastic Age but not as good as Video Killed The Radio Star. Buggles's performance is overlaid on a gloriously old school arcade game and there's also time for one last go with the screen quartering effect. The best moment is supplied by the Top of the Pops audience. The only person dancing when the camera swoops towards the front of the stage is a blonde haired woman with her back to the camera. She's dancing away, pumping her arms and swinging her hips so vigorously that she occasionally bumps into her neighbours. Most of the rest of the performance is shot in tight close-ups of the band but the final pan back across the studio reveals the same woman, still dancing away, but now in the middle of a huge empty space.
Number One: The Detroit Spinners, Working My Way Back To You – Forgive Me Girl (Medley). Simon Bates, "now this ladies mum [uses head to indicate woman to the left] is named Estelle Claire, right. And she probably remembers the first time that this song came out by The Four Tops [actually The Four Seasons, Simon]..." Yes Simon, this song came out in the impossibly long ago of 1966 when mums were young, and when you were *checks Wikipedia* 20.
Closing titles: Secret Affair, My World.
Performance of the week: The Undertones, My Perfect Cousin