The Friends of English Magic
This adaptation of Susanne Clarke’s enormous novel seems a curious choice for peak time Sunday viewing which is usually given over to what we might call family drama. This is dense, peculiar material that I suspect is unlikely to engage your average viewer used to Call the Midwife or ITV’s current competition Home Fires. There is no easy identification point, no particularly sympathetic characters and no concession to modernity. Combined with an atmosphere steeped in period mystery and darkness it is a tricky sell. By the way, it’s excellent.

In the 1800s magic has disappeared from England for three hundred years; I wonder if we find out why because that in itself sounds like an interesting story. Anyway this is not to say there are no magicians; in Yorkshire where the story opens a table full of pompous gentlemen who call themselves magicians but merely discuss the art pour scorn on a young academic John Segundas who is seeking the real thing. When he follows a trail that leads to a meeting with the reclusive Norrell he finds an enormous gothic house stuffed with an ample library but little hospitality. When he reports back a challenge is thrown down that if Norrell will give a display of actual magic, the Society will renounce their status as magicians. Summoned to the Cathedral they are suitably stunned when the stone statues start speaking.
The incident triggers a certain notoriety for Norrell who is pushed by his rather overbearing assistant Childermass to move to London. Once there he finds himself the celebrity de jour, called upon to attend functions galore, difficult for a man who appears decidedly anti-social. The other strand of the story involves wastrel Jonathan Strange whose austere and elderly father’s death stirs him from his torpor with a desire to become a magician. The story is intriguing and centres on a prediction that two magicians will bring magic back to England and a warning about the mythical raven King.
The literary roots are showing in the lengthy dialogue scenes and a bare minimum of special effects as well as the verbal extravagance of a number of characters. There is a sense that the viewer must rise to the material with little attempt to make things easy. I’ve not read the book so can’t comment on whether much has been excised but the pace is unhurried and the results, for those who take the trouble, are illuminating and frequently fascinating.
Much rests on the performances and if you only know Eddie Marsan from his parade of un-savoury characters then you may be surprised by the dexterity he brings to Norrell. With barely a movement he manages to convey the characters’ reticence and growing irritation. It’s a performance of considerable skill yet unshowy rather like the magic the character performs which is done without recourse to sizzling Sulphur or shouty runes. In the two magical incidents we witness - the statues and later bringing Lady Pole back from the dead - the production portrays them in a manner that underplays rather than overeggs the feats. This seems a good tone for a series that clearly wants to be taken seriously to take. 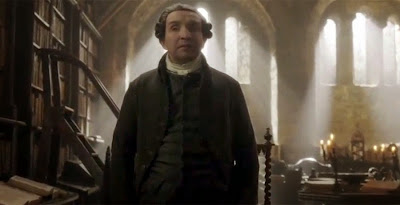 Elsewhere the strong cast enjoy the florid language of the piece, notably Vincent Franklin who seems to be channeling Christopher Biggins (in a good way) as Drawlight, who anoints himself to a role akin to Norrell’s publicity agent when he arrives in London.  Paul Kaye tracks familiar territory for him in the significant role of a scruffy street magician Vinclulus who is a lot more than he seems. While definitely cast to type he brings a danger to proceedings.  Marc Warren rocks the biggest quiff in history playing a mysterious gentleman with whom Norrell agrees a dangerous pact to bring Lady Pole to life. Enzo Clienti impresses as Norrell’s factotum Childermass a brooding presence on the touchline.
Strange’s storyline adds a lighter touch, especially a sequence where his father’s put upon assistant is forced to stand in front of an open window despite having a terrible cold! Bertie Carvel, recently impressive in Babylon, takes on a totally different role here, his loud, flamboyant but flighty personality likely to be a perfect foil for Norrell, though they don’t meet in this episode.
Perfectly directed by Toby Haynes, the episode is rich with detail and visually strong. You can almost feel the cold of stones or the warmth of a fire. The bleak look adds lashings of mood and the scene with the statues is pitched just right with humour as well as scariness. Some people have apparently complained about the sound quality but this is no turn the volume up Wolf Hall / Jamaica Inn scenario, in fact on my quite old TV it sounded fine.
The first episode’s overnight ratings seem to have tied with Home Fires, with 4.5m each but then again this is a one off serial and ratings are liable to less relevant. Somehow you feel this production will grow in reputation as it continues. Even if doesn’t top the ratings it will surely pick up some awards.