How is Mrs Pole?
She’s not herself as it goes. Seeing things, being frightened of mirrors and even more of sleeping the recently reborn Mrs. Pole is in a right tizzy and this is disturbing  Norrell no end. He thought – as you would- that by entering into a bargain with the bequiffed spectral Gentleman to save half her life that she would live to her forties. However the literal interpretation of this resurrection means that she has to share half her life- whenever she sleeps- with him in some bizarre ballroom scenario. Perhaps two million viewers are feeling as shaken as Mrs. Pole for they have deserted the drama after just one week which is a pity as they missed out on a far more accommodating episode. 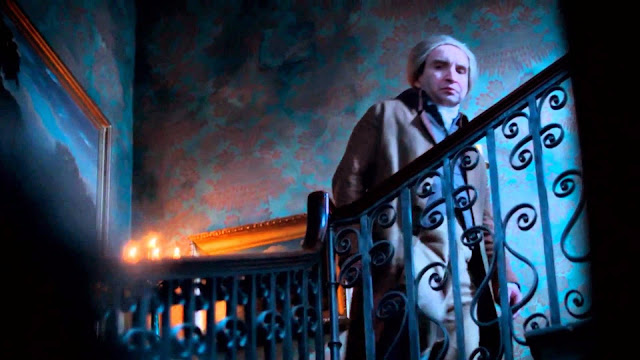 It is the case that the opening week’s events were talky and low key; even the magic was sparing limited only (well I say only but it was really impressive) to some chatty statues. This week however we have a spooky floating woman, a piece of paper whose reflection is outside the mirror (this is understated but rather brilliant) and some thundering horses made of sand. Most impressive of all are the water ships; an illusionary fleet terrifying the French in the opening sequence but which turn out to be merely images made from the sea. This is filmic in quality and you have to congratulate director Toby Haynes for making it all look convincingly expensive yet in keeping with the generally pale pallor of the series’ look. Unless of course they hired an actual magician to create the effects.
A number of weeks seem to have passed and Norrell is now working for the government as the ultimate spin doctor in the war with France. Eddie Marsan’s stony faced reluctance to engage with other people is nicely tempered by a feeling that at times Norrell enjoys this applause and attention. He seems to be something of a control freak too. Why else would he look a little peeved when news of Jonathan Strange’s wilder reputation filters through. Norrell is an interesting character and Marsan draws depths from stillness simply by a facial grimace or a more wary than usual tone. There’s a moment when he is being watched and amazement is expressed that Norrell is laughing.
The first meet up between Norrell and Strange is casual and soon develops into about as chirpy a relationship as Norrell seems capable of. Bertie Cavells’ portrayal resembles an 18th century Doctor Who in enthusiasm and a child in amazement at the feats he can perform seemingly without training. There’s an undercurrent in their conversations that goes beyond merely master and apprentice with Norrell’s obsession with books and learning jarring with Strange’s uncontrolled powers. That their abilities reflect each of their temperaments becomes clear quite soon. This comes to the fore when Strange is called in to deputise when Norrell cites headaches and proceeds to impress the politicians already starting to tire of the other magician’s fussy nature. As the sand horses charge forward Norrell is stuck between being impressed and irritated.
The whole episode moves faster and is easier to enjoy than the first with the impressive visuals matched by strong performances Alice Englert is excellent as the unfortunate Mrs Pole and Marc Warren manages to be menacing despite his dodgy barnet. Amidst all the political and magical posturing Charlotte Riley makes a pragmatic Arabella Strange who takes everything in her stride while Vincent Franklin’s arch performance as Drawlight continues to epitomise society’s vanities and shifting alliances.
This is a series that refuses to conform to genre and can be a little over serious but there is humour interspersed within a dense but fascinating premise. Maybe those two million people can be tempted back? It would only take a small spell… 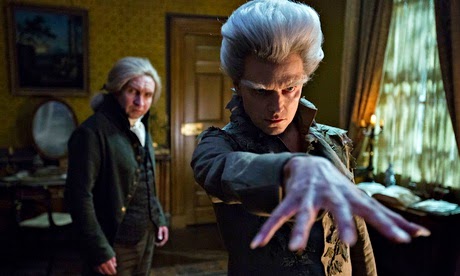