The title is a bit of a giveaway as to what occurs at the end of the first season- but is missing from the archives- which is luckily repeated at the start of the episode. Somewhere under a pier the unfortunate Toby is defusing a bomb only it goes off killing him and two others. Nobody seems bothered about the two others by the way but John Ridge is mightily peeved at Quist whom he blames. “You killed Toby Wren” he bellows during a stand up argument. The bomb isn’t the only thing that goes off! 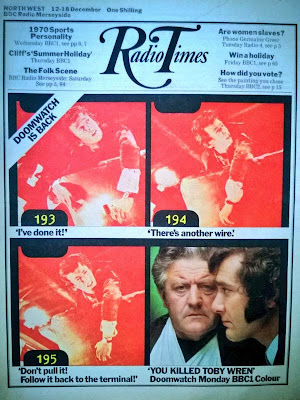 It’s a great episode pushing the series’ moral and scientific concerns ahead of emotional issues which in turn leads to the latter being unpeeled. Both Quist and Ridge come under the narrative microscope in a manner which they have not previously, at least not in the surviving episodes. Writer Terence Dudley gradually draws together the fact that they are more similar than either would be prepared to admit. Quist’s behaviour at the Pier, his dogged insistence on Doomwatch dealing with the bomb mirrors Ridge’s own involvement in what initially appears to be a sub plot concerning embryo research. Dudley brings these together when Ridge charges into the lab and is so horrified by what he sees that he decks the nearest technician. Normally this sort of Ridge behaviour can seem slightly amusing to modern eyes but as we’ve been privy to what he’s seen you can understand his shock. Probably the grainy video copy makes it more effective than it actually is but the sight of a tiny humanoid head on an animal is quite sickening.
Thus Dudley draws the parallel; Quist’s concern that prior interference with the bomb might trigger a nuclear explosion drove him to over-ride others and send Toby down to defuse it. Faced with this truth Ridge backpedals and ends up defending his boss at the tribunal that’s in hand. Certainly this is a more powerful episode because of the human dimension of Wren’s death though to be honest the character never really made as much of an impression on me as he has on Ridge. Still it gives both John Paul and Simon Oates ample opportunity to get angry and show off as the script delves into their personal demons.
The symmetry of the story is completed when Quist takes advice to see a psychologist who turns out to be a women and there is some attraction between them while Ridge’s usual chatting up a girl to gain entrance to a laboratory backfires spectacularly during his meltdown when she tells him some home truths about his character and he realises he is basically the same as Quist.
With John Barron returning as the eyebrow wielding Minister (who probably didn’t get where he is today by setting off explosions on piers) plus a new cheery secretary it makes for an excellent start to the second season. That this was a peak time drama is even more satisfying. You imagine if anyone presented it today TV execs would back away faster than you can says chicken with two heads!