twuarchive: occasional slices of fanzine history
Back in 2009 the dvd of the children's series The Feathered Serpent was released and roved to be a suprisingly absorbing and mature work. You can read my overview of the series in the Best of This Way Up book (see the Stuff to Buy page). The issue also included an email Q&A with one of the series' stars Richard Willis who was by then based in the USA but still acting and here it is.....

There’s lots of killings, poisonings and torture going on; what impression did that make on you as a younger actor at the time?
I grew up with Shakespeare.  My first acting role was Young Macduff in Macbeth and so I was quite used to blood and violence.  However I did think that human sacrifice would be a grim way to go!
How much rehearsal time was there considering the large amount of dialogue?
I think we had two weeks for two episodes, but I'm not sure. I also grew up with Weekly Rep.  That was a theatre whose company would stage plays in a week and so I was undaunted by the time. 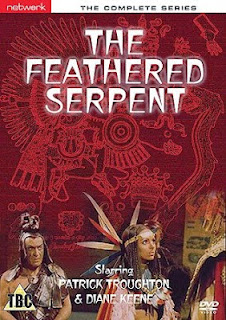 Did you like your costume, or what there was of it?
I liked the colour.  Wasn't it blue?  There wasn't much of it, but I enjoyed wearing what there was because it was so completely different from other costumes I had worn before.
The cast are all well known TV people from those days; who did you get on with the best?
I remember getting on with everyone.  It was an extremely happy show to work on.  I adored Patrick Troughton who of course I had grown up as the second Dr Who.  Brian Deacon I spent a lot of time with.  He would play practical jokes on me. Granville Saxton made me laugh a lot.  Diane Keene I had a huge crush on, of course.
What was the atmosphere like on set; (hopefully lighter than the story)
It was fun, but professional.  I remember we used a lot of haze or smoke which would get into your throat.  It was never warm enough.  I used to sneak away and watch Benny Hill and his angels in the next studio.
The sets themselves look tremendous even now, they give the atmosphere of a stage play; what were they like to work in?
The sets were tremendous.  In fact the production values were all a cut above your usual children's TV series.  They helped give a layer to our world which provided a realistic background.  I loved the carvings and the shape of the stones.
There are 3 different directors – Vic Hughes, Stan Woodard and Michael Custance; what do you remember about them?
I remember that Stan and Michael were young and very easy to work with and especially kind to me.  Vic was a suit and tie man and the producer as well.  He was a little more formal, but I liked him a lot.  Halfway through the second series he looked at me and said: "My God, you've got blue eyes.  You're an Aztec.  I would never have cast you if I'd known."  I had been recommended by the writer John Kane, who I had seen as Puck at the RSC in Peter Brook's famous production of A Midsummer Night's Dream.  John saw me playing First Baddy in Sleeping Beauty at the Nuffield Theatre in Southampton two years before the show and remembered me.  Which goes to prove the old theatre maxim 'you never know who's out front." 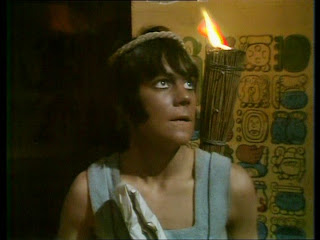 You have some difficult scenes; like being paralysed in series 1 and then in season 2 you get a sack over your head and later staked out! Presumably these are memorable for the discomfort if nothing else?
I always enjoyed anything physical.   On Doombolt Chase, another kid’s series of the time, I actually did all my own stunts - crashing a land rover, riding a horse at full gallop, jumping off a speeding motor boat - and so the physical stuff was never as problem.  The staking out did make me feel very vulnerable.
Do you know why there was such a long gap between the first and second series?
I don't know why.  I expect that they had to wait for the cast to be available again by the time they made the decision for the second series.
One of the most interesting things is the traps in season 2; what do you remember about those? They look like actual working models rather than effects.
I haven't seen the series again yet and so my memory is a little hazy, but I do know they were safe and that I never felt in danger.
With apologies for the obvious question- can you recall any accidents or jokes on set?
Er...yes.  Back to the staking out.  They finished the shot and called lunch... and left me there.  Five minutes later they came back in laughing and singing Happy Birthday.  It was my eighteenth.
Did you get recognised in public much in those days as you were in quite a few well known series?
I get a lot of people thinking they know me.  Whether that's from the TV I've done or not, I don't know.
What would you say has stuck most in the memory of making the Feathered Serpent?
I remember the actors and being tremendously happy making both series.  I remember the early mornings and the hour in make-up. The make-up girls sponging on the tan was rather sensual.  I remember it being a well-acted series and one I was extremely proud of.
Of all your child / teenage acting roles which ones stand out as favourites?
I was pleased with all of them.  But if I had to pick:  Soldier in Soldier and Me for Granada because it was so far removed from who I was.  And Lupin in A Diary of a Nobody.  It was shown on BBC2 against the first series of To the Manor Born and so hardly anybody saw it, but it had superb actors who I all admired and again it was a character part that I really had to stretch myself to play.  I managed to work a lot in TV at that age because I was a character actor I think.  In one particular month I had three series on TV in one week.
Nowadays what sort of roles do you prefer?
I have no preference.  I like to be surprised.  I have been doing a lot of Shakespeare over the last eight years and I have loved those roles, Prospero, Brutus, Iago etc.   I would now like to get back to doing more TV and film... it would be nice to pick and choose, but I am not famous or successful enough to be in that position.
And finally would you have agreed to become a Doctor Who companion if asked and nowadays would you agree to play the Doctor himself?
Of course.  I would have loved to be his companion.  And the Dr Who episodes are a whole other interview.  They would never ask me to play the Dr, but if they did decide to go for an older actor again, it would be a dream come true.
For much more on Richard’s career as well as some interesting thoughts and memories check out his website www.richardwillis.org