You might think because you’ve watched Top Gear you know all about cars and trucks but wait till you see this film. The real stars of Mad Max Fury Road are the array of souped up, pimped up metal monstrosities tearing across a desert landscape engaging in continued carnage. There’s nothing elegant about them at all. They’re made of joined up bits of different weather beaten road hardy vehicles soldered together to create angular modes of transport. They’re weaponised with all manner of hidden defence and assault capabilities the best of which are long poles rising into the air from which someone dangles, leans across and drops a grenade into whoever they’re pursuing. Our stars in a reasonably battered car may be Charlize Theron and Tom Hardy but they really don’t get too much of a look in amidst the clanging metal, fire laden racing and dusty pursuit. The bad guys even have a guitarist suspended in front of a bank of speakers.  Yes, the warriors of this post-apocalyptic place bring their own incidental music! 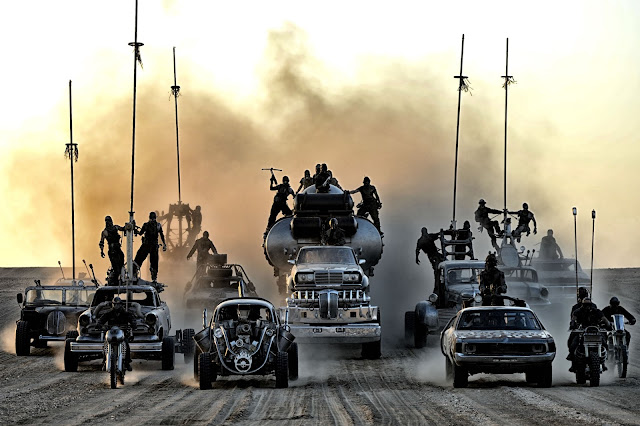 It’s a very loud film indeed with a sound turned up to the mad max as well. In fact it’s really one long chase. Furiosa (a shaven headed nearly unrecognizable Charlize Theron) is engaged on a regular trip from The Citadel where the populace is kept under the thumb of Immortan Joe by his control of the water supply. She leads her convoy off road and when it turns out she’s kidnapped Joe’s several wives the chase begins. Amongst the pursuers Max himself – introducing himself with a Bane –like voice over- is strapped to the front of a jeep as a `blood bank` for a young warrior – or `war boy`- called Nux (an equally un-recognisable Nicholas Hoult). You have to give some credit to Hardy who spends the first third of the action tied up with his face obscured by a metal helmet.
The action is shot with considerable momentum by George Miller capturing the dusty bleakness of the landscape and providing a number of tense sequences especially during the bold first half. One advantage the film has over some of this year’s other big offerings is that much of the action consists of practical rather than computer generated effects. You feel the scraping of metal and the thunder of wheels because they are really there. An army of stunt people do some very impressive work adding to the audience feeling real danger. In this respect it is more exciting than the now standard superheroes demolishing public buildings.
At just the moment when he realises we might be tiring of tyres not to mention engines, dust and people falling under wheels, Miller opens up the film with (a little) more shade. Turns out Furiosa is taking the girls to the mystical “green place” and circumstances cause Max and Nux to join them initially under duress but eventually as willing parties to the quest. There’s a neat twist that you may see coming which turns the film round literally for a final half hour though because the first half has been so intense this doesn’t have quite the same impact. Even so there is thrilling run in near the end that will have you gasping with disbelief as one jeopardy after another whizzes past. Incredibly Miller manages to squeeze a little more ampage from the scenario. 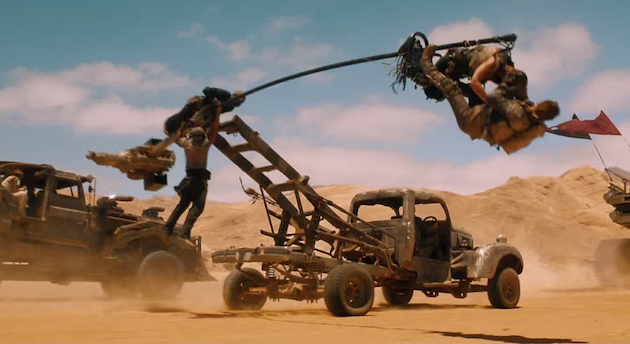 Inevitably the humans struggle as much with character as they do to stay alive though there is a message of hope running through the film. The protagonists are all searching for some escape. Tom Hardy’s Max is hard to read and could have done with a little more dialogue meaning that Charlize Theron steals the film as the determined practical Furiosa. Nicholas Hoult has the only real character development, his early nihilistic Nux slowly turning to the good side thanks to an attraction to one of the wives. Hugh Keays- Byrne's Immortan Joe is a riot as he shouts under his costume and big beard but he is a very dangerous villain of that there is no doubt.
It’s not a subtle film drawing from Western and comic book iconography as well as having more than a hint of those old cartoons like Roadrunner or Wacky Races albeit in a demented form. Some may weary of its near constant motion and action. With comparatively little CGI, a terrific sound mix, amazing stunts and strong direction it is a thoroughly exciting ride to be seen on the largest screen you can find!