You can write about anything on a blog and to celebrate the milestone of this being the 900th post for This Way Up as a blog (there’s a whole pre- blog history of it being a fanzine of course) I wondered what to type. Not for this blog some self congratulatory blurb about the achievement of so many posts in just over seven and a half years. Oh no, something new, something relating to numbers perhaps. Or a particular number? I suppose it would have been more apt to have done this 339 posts ago but never mind because this post is all about the number 561. Having a clear out lately, I found a key and metal fob both of which had the number 561 inscribed on them. I have no idea of the origins of these items though clearly they must come from a hotel. Judging from the look of the key it’s either a rather old hotel or one that was stayed in some decades ago. Nowadays hotels have those electronic keys that resemble credit cards. Examining this key and fob more closely I wonder if they are from a hotel though. 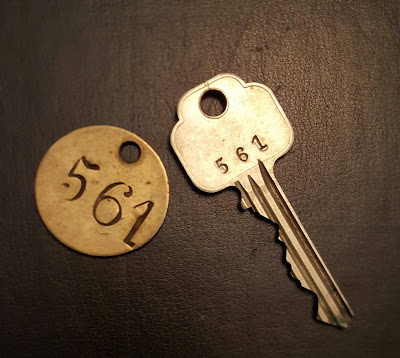 For one thing the number is etched rather roughly into both items; rather like the sort of terrible work I used to do when they forced us all to take metalwork at school. It lacks the professional look you’d expect even from a hotel that still uses or used traditional keys. Mind you it sounds like a big hotel whichever way you look at it. 561 rooms is a lot. Unless its one of those places that uses the floor number as the first number so this is from room 61 on the fifth floor.
Perhaps this Room 561 isn’t in a hotel after all. Maybe it is from a safety deposit box in which I left something really important years ago but I’ve totally forgotten what it is. Or where it is. Just imagine there’s a sealed box sitting somewhere containing that cache of diamonds I found. I suppose if I had ever found such a thing I’d remember it though. Perhaps it isn’t  the key that’s significant but the number 561. It might be part of a password to open a secret file containing a formula that is extraordinarily important.
Googling 561 I discovered it’s the telephone area code for Palm Beach County in Florida. It’s a bus route that goes from Bolton to Breightmet via Tong Fold and Top O’ Th Brow (are they making these names up?) Or it’s a bus that runs in Halifax or a school bus service in Warwickshire. In fact a lot of places seem to have a 561 service. It’s a section of the UK 2006 Companies Act stating the terms under which a company can allocate equity securities. It’s also a publication issued by the US Internal Revenues Service regarding the value of properties. Studio 561 is the name of a `creative centre` in California.There’s a Fluke 561 which is an Infrared and Contact Thermometer. There’s an LED bulb called 561. There’s even a novel titled `561` penned by Katherine Heiny which seems to be about a man moving house and being helped to do so by his accommodating two ex-wives.
What about the year 561? Well it started on a Saturday and amongst the headlines that year was the Battle of Cul Drebene, a new Pope John and apart from the deaths of some unremarkable monarchs that’s all even Wikipedia knows. How dull it must have been to have worked in the newsroom in 561. Another site which lists notable historical events declares boldly that there are no recorded events for that year.
And there you have it. 561 doesn't really have any special significance for anyone and is the number for no more than some mundane things, bus routes and a bulb! None of which really solves the puzzle of where this key came from. I’m thinking perhaps that it is a significant key I haven’t yet used which has somehow fallen back in time and it’s importance will become clear when I need it to. But then that’s just me! Happy 900th post John.