Reviewed by Chris Arnsby. Andy Peebles: "Hello. Good evening. A very good welcome to Top of the Pops and heeere's Janice." Janice Long: "And we've got some great things in the show; Depeche Mode, Howard Jones, and Freeez, but at number twenty-four it's Love Will Find A Way from David Grant."
[24] Love Will Find A Way: David Grant. Towards the end of the instrumental, David Grant drops into a crouch and has a go at one of these break dancing moves he's been hearing so much about lately. It's clearly something he's still learning because he does it at half speed and it looks very lacklustre. David Grant's not a bad dancer, but this is a pretty dull song and performance to start Top of the Pops, and the timing is not great because coming up next is... 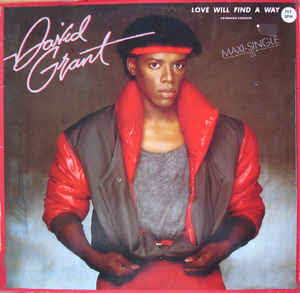 [6] The Rocksteady Crew: (Hey You) The Rocksteady Crew. On film from New York. Here to give David Grant a lesson in dancing are Crazy Legz, Prince Ken Swift, Kuriaki, and two others whose identity I'm not sure about. Their names have been overlaid in a font that's quite tricky to read. One of them is called Buck and the word Buck is then followed by a number 4 that's made up of smaller number 4's; so that would be Buck 4? Or possibly Buck 4444444. Then there's someone whose name I can't make out at all; it might be dBze. Is that a sideways letter n? Could he be called dBne? I don't know. Any way, the Rocksteady Crew are the funkiest RSC this side of the Royal Shakespeare Company. 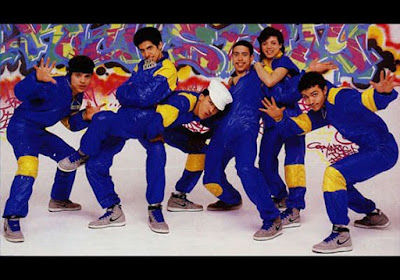 [3] Howard Jones: New Song. Howard Jones has brought Jed along "of course," as Janice Long says. Also along for the night are the Howard Jones fan club. I can't think of anyone else who would be quite so enthusiastic; e.g. Howard presses a button on his keyboard= chorus of excited whoops from crowd. Oh, and now they're all singing along to the "ooh-ooh-ooh" bit in the chorus. There's too much audience participation for my tastes
[25] Billy Joel: Uptown Girl. On film, obviously. Billy Joel doesn't do Top of the Pops. Half the successes of this song must be down to the promo. The two seem indivisible in a way that Karma Chameleon -to pick a random example- isn't from it's video.
[36] Gary Numan: Sister Surprise. Gary Numan has eased off on the orthopaedic Mad Max look he was sporting when he performed Warriors (01/09/1983 edition) but he's still wearing a lot of black leather. You'll have plenty of time to study his clothing as this song eats up almost five minutes of valuable Top of the Pops time; and it outstays its welcome after two. Be grateful for small mercies, on the album this song runs for eight minutes. Imagine if they'd played the full version, the next song would have to be dropped.
[26] Freeez: Pop Goes My Love. The next song turns out to be Friz. Who are still monstrously rubbish. Maybe playing eight minutes of Gary Numan wouldn't have been such a bad thing after all.
[30] Elton John: Kiss The Bride. "Elton John's been doing really great things in the charts this year," says Janice Long. Has he? I say in reply. It appears Elton John has been affected by the Curse Of The Human League (try reading that in a spooky Gothic font). The Human League sprang into BBC4's repeat of the 1981 charts fully formed, like Athena from the head of Zeus (culture), with Don't You Want Me because their previous hits were all performed on shows which couldn't be shown. In 1983 Elton John appeared on Top of the Pops eight times and BBC4 skipped five of these editions. I'm Still Standing was the most unlucky song. All three performances were not shown, including one snipped from an episode with Andy Peebles and Peter Powell because it was part of the US Chart Update hosted by J-n-th-n K-ng. Anyway here's the bonkers video for Kiss The Bride in which an uncomfortable looking Elton John is dressed in a morning suit and perched on a pile of cars for a cold night shoot.
[21] Depeche Mode: Love In Itself 2. Depeche Mode are surrounded by the audience, so there's some amusement to be had from watching the crowd dance uncertainly to the stop-start tempo of the song. 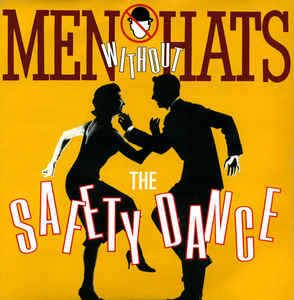 [13] Men Without Hats: The Safety Dance. On film. I'll always have time for this song, if only because of the bravura way Ivan Doroschuk rhymes dance and hands.
[1] Culture Club: Karma Chameleon. A repeat from the 22/09/83 edition.
[17] Meat Loaf : Midnight At The Lost & Found. Audience dancing and the closing credits.