Regenerated Doctor Who is a Hit!

A lot of fans had a preconceived notion of what the new regenerated Doctor Who would be like based on about 18 months of speculation, gossip and very slim pre publicity. While you can never make too many assumptions based on a new Doctor’s opener, it is fair to say that there have been a lot of changes though in other ways the programme has moved closer to how it was back in the 70s. It is the potential that the episode suggests which is the most exciting thing of all and it seems the viewing public agree with the overnight ratings alone topping 8 million and when consolidated figures are calculated that figure could easily top  10 million. It is looking like a palpable hit.
Spoilers after this point
Read Matthew Kilburn’s excellent review of this episode on www.spacetimetelegraph.blogspot.com 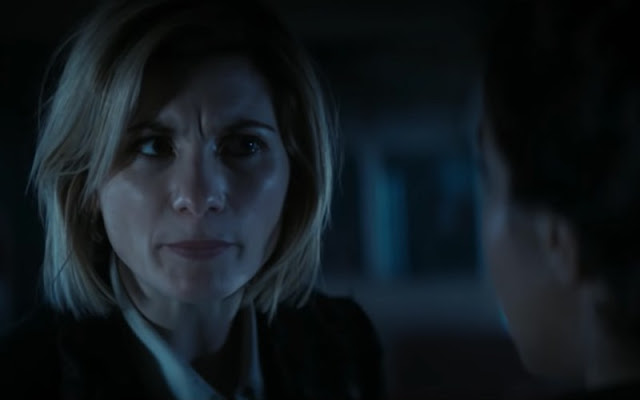 One thing the episode negates is the gender issue. Jodie Whittaker is so assured in her opening scene that, one line aside, the matter is relegated to trivial detail and she is thus able to establish her Doctor without that baggage. Aside from historical stories were it might be more relevant I wold hope it’s rarely discussed in the narrative again thus demonstrating that the gender of the lead actor is irrelevant in this particular role.
Wisely writer Chris Chibnall also reduces the traditional post regenerative trauma to a minimum while finding room for each of the new `friends` to make their mark. At times both Ryan and Yasmin do seem a little mature for this sort of adventure – both of them adapt quickly to the circumstances meaning we are lacking a wide eyed, rather frightened character to take the journey. These two are more like people who’ve already had several adventures but hopefully when faced with alien planets and unfamiliar places they may be less assured. Both Mandip Gil and Tosin Cole seem to be versatile, strong actors who definitely rise to the occasion here. Graham seems like the sort of person you would never imagine as a regular which is exactly why he should be. The entire episode also reminds people that Bradley Walsh is actually an accomplished actor even though his best known work is as a comedian or presenter. He brings a composed truth to all his scenes. Anyone who saw his work in Law and Order: UK will know how he is capable of holding our attention often in an understated way.
The main event is obviously Jodie Whittaker’s debut which proves to be a very strong performance full of energetic verve and drawing in some of the actor’s friendly personality. She nails the Doctor quicker than anyone since Tom Baker. By the end you feel she is instantly the character unlike some of her immediate predecessors; even David Tennant took a few episodes to settle in. I hope that this Doctor’s `fizzing` energy will eventually be tempered with more thoughtful or angry moments which would lift her up to be amongst the very best. Her performance in this episode is winningly excellent, full of the sort of nuances that add a little cheek and some innocent fun as well as her somewhat joyful construction of the sonic screwdriver! 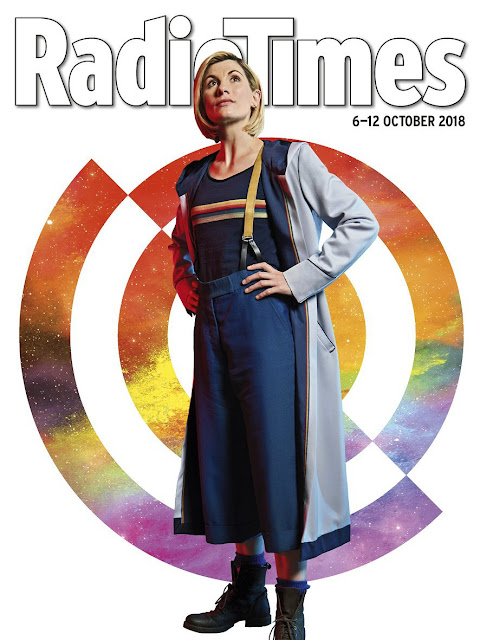 A real Doctor Who fan thing is suggesting which guest characters who could have been regulars and it’s a list that surely now encompasses Karl played perfectly by Jonny Dixon. He seems a more interesting person than his role in this episode allows and the fact that he makes a mistake at the end means his flaws are ripe to be tested on other adventures.  He also provides some of the episode’s broader comic relief.
Chris Chibnall has come in for some criticism for his previous Doctor Who stories – though for me only the Silurian two parter doesn’t totally work- but this is his strongest entry for the series so far. He definitely shares Russell T Davies’ ability to write characters we feel we know even if they only get a handful of lines. Another pleasing aspect of the episode is that he has brought back one of the facets of the programme which seemed to get lost in recent years.
People die in dangerous circumstances and that’s sad but the Doctor barely has time to acknowledge it. After years of either apologising, avoiding or over egging these stark deaths, this episode despatches several supporting characters with finality and without apology. This is how Doctor Who used to be so much so that there are apparently only two original series stories in which all the guest characters we meet survive till the end. And the Doctor is rarely interested in those fatalities beyond the briefest of acknowledgments something that is addressed directly in `Pyramids of Mars` when Sarah questions the Doctor’s apparent coldness and he explains that he has to focus on the bigger picture.
In the scene where a security guard goes from a call to his niece to being killed in less than a minute by our antagonist Chibnall shows a hitherto concealed metal and a boldness missing from Doctor Who for several years. The programme should be – within obvious boundaries- hard and grim at times because it’s a dangerous Universe. This scene also turns out to be a forewarning of how the episode ends because the writer pulls the rug from under the fun with the shock demise of Grace.  It’s a shame to write out as talented a performer as Sharon D Clarke so soon but importantly it shows us that for all the resourcefulness the new Doctor has shown, she can’t save everyone. This is a great tonal shift from the triumphant sequence atop the cranes we’ve just witnessed meaning the episode climaxes at its best.
The script is also wily enough to include a couple of audience mis-directions; at the start we imagine Ryan’s vlog is about the Doctor and near the end when we’ve not seen the Doctor remove the DNA bombs so assume a risk that isn’t there. While this sort of thing is what made the Steven Moffat led era become overly knotty, done sparingly it does add to the fun of watching.
Another thing we didn’t know beforehand was just how this new series would look and the answer is fantastic!. From the opening harsh beauty of the Yorkshire countryside through to a very industrial setting for the climax there is an emphasis on realism The Doctor’s construction of a sonic screwdriver using blowtorch and hammers supports this as does the crane scenario at the climax and the vistas of Sheffield.  Doctor Who has rarely looked so of the present as it does here, not a self -conscious Pertweeland style but a down to earth bluffness that suits a Yorkshire set drama. Meanwhile Segun Akinola’s incidental music is tremendous adding a menacing electronic drone that underscores the visuals. 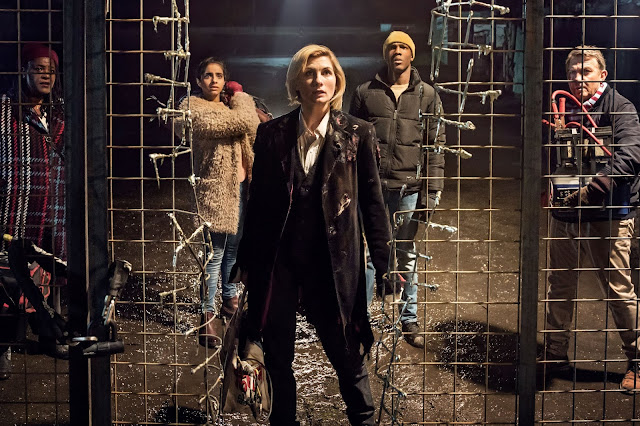 As to how the Doctor survived the fall when a previous incarnation’s regeneration was triggered by a much less severe drop I would imagine- though nothing is said in the finished episode- that the train was surrounded by some sort of energy field due to the alien presence which broke the fall. I suspect, despite Chris Chibnall’s insistence that this year is all standalone episodes, we may return to the culture of the Stenza again.
In the list of Doctor’s opening episodes this is the strongest since `Rose` and does set a high bar. I always think that public reaction to episodes 2 and 3 is more important in the end. How many of those who watched on Sunday were curious and how many of them were satisfied enough to watch again? What we do know is that the series has once again been rebooted in a different, interesting direction and we have potentially one of the best Doctors ever!
Doctor Who 2018 series reviews by different writers each week on  Space Time Telegraph