It’s that time of year again. “Pumpkins roasting on an open fire” as the song would go if there was such a thing as Halloween songs. And you had an unfeasibly large fire. Unfortunately there’s not, people just play songs with dark titles. Imagine if carols were adapted to Halloween though; you’d have the likes of `I Wish I could eat Pumpkin Every Day`. The shops are brimming with pumpkins and the thing is nobody really knows what to do with them beyond carving evil looking faces out of them. What do you do with the part you’ve scooped out? Well, there’s actually loads of things you can make- Pumpkin Puree, Pumpkin Tortellini, Pumpkin Cupcakes, Pumpkin Smoothies, you can roast them or bake them, you get the idea.  It’s quite rare though to find someone saying pumpkins are their favourite flavour. Maybe just stick to carving the head and making some sort of gluey soup from the rest? 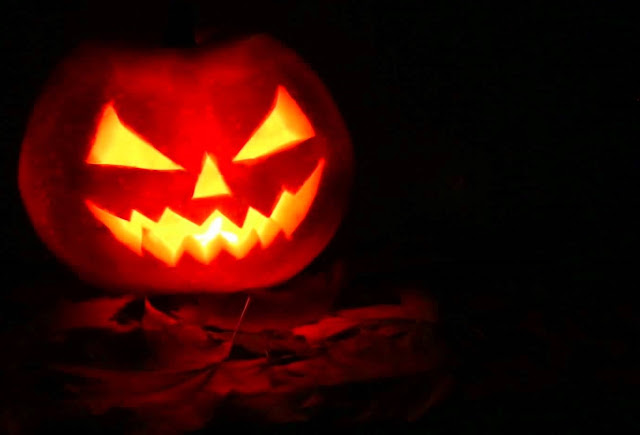 Growing pumpkins seems to be quite a competitive occupation and while there have been many claims to have come up with the world’s largest there are probably farmers who never record the subject and have grown even bigger.


The current world record seems to have been set in 2016 by a German grower whose orange monster weighed in at 2,624.6 pounds. There are other related records too- for example the largest ever pumpkin pie was made in Ohio in 2010 weighing 3,699 pounds and measuring 20 feet in diameter. To make such a thing, just in case you were thinking of it – you would need 1,212 pounds of canned pumpkin, 2,796 eggs., 552 pounds of sugar, 7 pounds of salt and 109 gallons of milk. And a kitchen extension. It probably tasted terrible which I suppose fits in with the theme of Halloween. This year of course there is the Trumpkin which is probably marginally more sensible than the President after whom it is named!


So, why do lots of people dress up as luminous ghouls and carve faces in pumpkins at this time of year anyway? Inevitably the whole thing has become commercialised meaning people just buy pre-made costumes rather than make their own. Halloween, or as it’s properly written Hallowe’en was first named in 1745, the name derived from All Hallows Eve. This in turn derived from a Celtic festival called Samhain which marked the end of the harvest and the start of winter, which they associated with death probably because central heating hadn’t been invented yet! People believed that on this night the boundary between the worlds of the living and the dead was able to be breached even though they had decided on the date themselves.


The Celtic new year started on 1 November so this date was designated All Saints Day in the eight century by Pope Gregory 2 for people to honour the saints or the hallowed. `Hallow `means “to make holy” and was often used instead of Saint.Thus the night before became All Hallows Eve on which people would leave offerings of food such as turnips to ward off ghosts that were supposed to create panic and trick people as they drifted by. So we know that ghosts can be warded off with turnips! Worth remembering to always take a turnip with you if you’re going into a big old empty house any time soon.


The `trick or treat` tradition is derived from a practice called “souling” which was when children and the poor would go begging for what were called soul cakes. People would give them on the condition that the recipient would pray for the souls of the dead. Gradually this evolved into the modern practice of giving sweets and candy. The first recorded trick or treat of modern times was in 1927 though some historians believe it dates back to medieval times. As Britain became more Christian, these superstitions began to fade away but remained in tales of ghosts and fairies. The range of costumes you can now get has expanded over the last ten years or so though it does means fewer people go in for improvising their own.


The most striking Halloween images come from the Jack O'Lantern, faces carved in pumpkins and lit by a candle, a practice that developed from those terrifying turnips. A pumpkin being shaped not unlike a skull actually makes an even creepier face.


Around the world Halloween has different guises. In Mexico it takes the form of a two day event and in Spain it runs to three days. Each day is differently named starting with Dia de las Brujas (Day of the Witches), then Dia de Todos los Santos (All Saints Day) and finally Dia de los Muertos (Day of the Dead). The country has remained closer to the traditional idea of honouring the dead as well as celebrating life.There are some places – for example - Switzerland and Germany don’t seem to make much of a fuss over Halloween at all.


In the UK for a long time Halloween was viewed as a mainly American tradition which we didn’t really get too involved in preferring the excitement of fireworks and bonfires on 5 November while ghoulish going on were mostly confined to students. However over the last decade or so it has grown in popularity mainly because children can become involved and also the rise of social media. Your Halloween dressing up is not complete till you’ve wowed your Instagram followers with photos of your costume.


Beyond all this dressing up, trick or treating and pumpkin gorging, is there any evidence that bad or creepy things do happen on 31 October?  There have been historical events on that date – for example Mussolini was elected into power on the last day of October- but these are often only equated with bad events years later. There have been accidents involving people wearing Halloween costumes. There have been crimes motivated by the season’s traditions. However incidents where a walking skeleton with a burning pumpkin head and massive teeth broke into a house are rare if non -existent. Unless it had forgotten its keys.