Review Round Up- On Chesil Beach, The Happy Prince, Beat Beneath My Feet

On Chesil Beach looks like it could be one of those gently romantic period dramas but after a few minutes it is clearly not. Instead and rather boldly it peeks further into the first hours of a marriage than perhaps we might like. This deftly written and directed film is set in 1961 when young people knew a lot less than even younger people know these days so when newly- wed twentysomethings Florence and Edward find themselves alone together on honeymoon in a Dorset hotel what they do when they get to the bed is something of a conundrum for them both. While Edward is experienced in a laddish way, Florence appears to have no experience at all. It seems far fetched even to imagine such naivety but these are different times and the narrative uses their intimacy issues to paint a broader picture both of the history of their relationship and how they don’t really know each other at all. 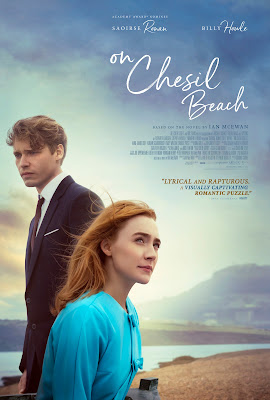 Adapted from his own book by Ian McEwan and directed by Dominic Cooke it veers from the uncomfortable to the awkward but is observed and performed to perfection by a strong cast. Saoirse Ronan notches up another memorable character who is often seen to be demanding yet inexperienced.  There is admittedly a large difference between the confident Florence we see in flashbacks and the cold woman we discover in the hotel. Billy Howle matches her in commitment and it is the duo who sell what might otherwise be a slightly unbelievable tale. Their key argument takes place at the titular location on a windswept evening and has the jagged quality of a real conversation.
One or two small things end up having a lifelong effect on them both and though the viewer may well find themselves wishing for some sort of Hollywood style happy ending it doesn’t really happen. However McEwan and Cooke do allow something similar in a couple of flash forwards at the end. On Chesil Beach is a film where silence, ugly character traits and a whiff of tragedy whistle through a story that picks up where the usual period romance might finish.

The Oscar Wilde story has been dramatized a number of times but the period after his infamous jail sentence is less often depicted. Written, directed and starring Rupert Everett The Happy Prince kicks off after the author’s release depicting his final years in exile in Europe. Living under a pseudonym his status slowly drops from grand hotels to small guest houses as he struggles fund his self indulgent lifestyle. In a powerful performance, Rupert Everett prefers to show Wilde as unpleasant and selfish railing against the world while facing each setback with an indomitable appetite for drink, drugs and sex. Told in flashback near the end of his life, it’s bookended by the poem that provides the film’s title which he imagines telling to his estranged sons.
It is clearly a role that Everett has been waiting to play for some time and he relishes the opportunity to deliver a fulsome character. His Wilde is capricious and wanting, demanding what he feels is his, driven by the sense of injustice that blighted his life. Ultimately he wins our sympathy because of our modern perspective though the film is wily enough never to judge from our point of view. You have to admire the way Wilde simply carries on despite knowing there will be no happy outcome.
Often gloomy and lamp lit, the places where we find the declining Wilde are as dingy and dodgy as the people he’s with. Yet the story remains riveting from start to finish despite slightly choppy editing. There are a number of stand out scenes – in particular when Wilde faces off against some students in a church and also when he performs a song atop a table in a seedy bar. Absorbing and well performed, The Happy Prince deserves more attention than it seems to have had but could be a slow burn success when watched at home rather than the cinema. 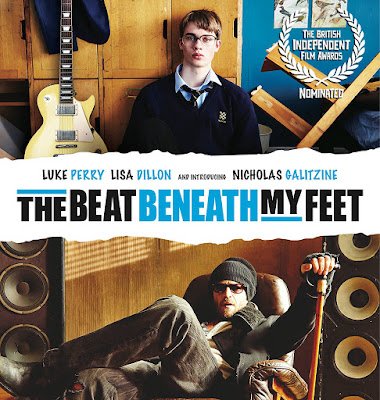 In The Beat Beneath My Feet, a formerly world famous rock star moves into an ordinary flat below an aspiring teenage musician. If the subsequent story beats are somewhat predictable, the means of getting there prove more interesting largely thanks to the performances and unshowy direction. It’s easy to imagine this scenario inspiring a typical Hollywood product, but writer Michael Mueller and director John Williams’ film is refreshingly down at heel. Occasional moments of unusual imagery do lift it above the norm though; in one striking sequence, the teenager imagines playing before a huge audience, all of whom are shown as cut out paper figures.
As grizzled and supposedly missing rock star Steve, Luke Perry wears the character’s hurt and regret like a crown of thorns and though a friendship with both Tom and his mum develops he never really thaws completely.  As Tom, Nicholas Galitzine is all lowered head and shyness as he struggles to keep his guitar playing from his Christian mother. Both Steve and Tom are characters in need of something and Tom brings out a parental care in Steve whose own musical skills are brought back to life after the tragedy that had ended his career. There are strong turns too from Lisa Dillon as Tom’s mum and Verity Pinter as the girl whose interest in his music further inspires Tom.  The story unfolds at a slow pace and some of the developments seem a bit unlikely. The narrative also veers closely towards suggesting too easy an outcome for problems however you’ll be rooting for both main characters by the end.