Doctor Who - Robot of Sherwood


BBC One 06/09/14 written by Mark Gatiss / directed by Paul Murphy / starring Peter Capaldi, Jenna Coleman, Tom Riley, Ben Miller
After two episodes that emphasised a darker approach, `Robot of Sherwood` from it’s not quite a pun title to its frenetic pace and use of running gags does bear much more resemblance to the Matt Smith years though somehow it’s better. In fact it is one of the funniest the series has done, with far more out and out jokes than usual, all of which work. I can’t remember laughing out loud at a Doctor Who episode for ages! I suspect the wider public will prefer it, fans probably won’t but there is enough in Mark Gatiss’ lively script for everyone. It is unquestionably enjoyable unless you’re the sort of person irritated by swashbuckling, robots or people talking very, very quickly! 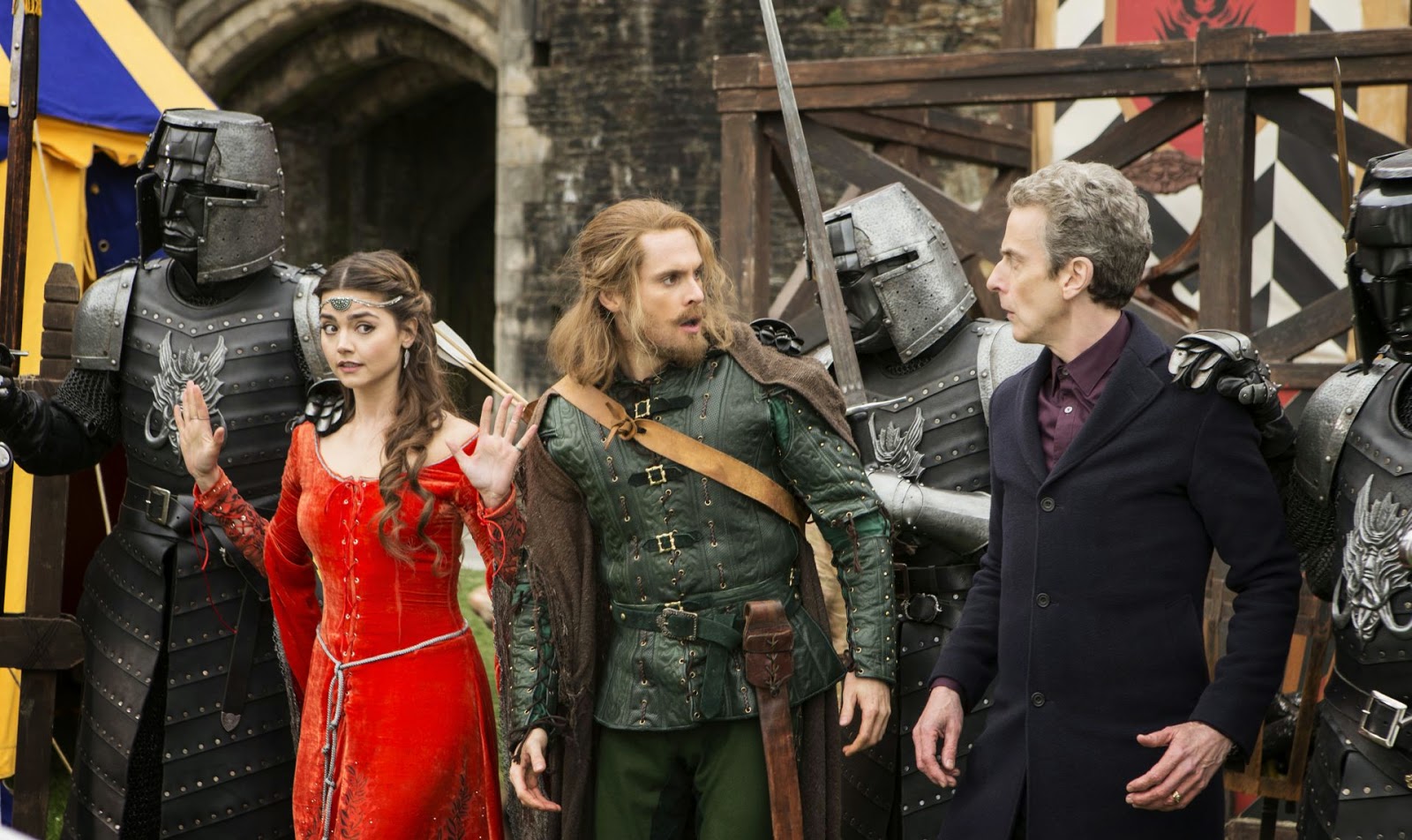 So, if you’re a legend like Robin Hood what are you really like? This may well have been the kick off gambit of the story but instead Mark Gatiss performs some rewarding rug pulling to reveal that in fact Robin Hood was exactly like the thigh slapping, raucous, heroic legend he has become. Given the title of course we were expecting him and his not so Merry Men to be robots but it’s a fun moment to discover in fact they are real; it is the Sherriff and co who are robots. Real life events mean we don’t see the scene where the Sherriff’s robot head comes off but this doesn’t harm the story too much leaving Ben Miller as a villain who – plain and simple- growls and charms to get his way and then falls into a vat of molten gold. That’s sometimes all you need from a villain.
Having glowered a lot so far, this is the episode in which Peter Capaldi shows the comedic side of his Doctor; the arguments with Robin in the cell are straight out of The Thick of It, minus the swearing of course, though I have a theory they’re filming separate versions full of strong language to release as extras! I like the seam of very English irritation this Doctor has – here it’s the outlaws’ persistent false sounding laughter he doesn’t like- and the need to prove himself the better man in front of Clara. Tom Riley’s Robin is a perfectly delivered cliché to make us think he is a robot of course and to later allow him to tone it down.
While Peter Capaldi has made fine work of his reign so far the beneficiary has been Jenna Coleman. Reduced to looking confused or lovestruck by Matt Smith’s Doctor Clara is almost a different character this season. For the third episode running she steals the show with her Northern wit and down to earth approach and now adds comic timing to her repertoire. It’s hard to imagine another companion handling the scene where she teases information from Ben Miller’s Ben Milleresque Sherriff as well or as amusingly.
The point of the episode is perhaps harder to find than the big castle as a spaceship. In bringing up the whole idea of the parallels between the Doctor and Robin by having them both showing off in front of Clara and later acting heroically, Gatiss doesn’t really take it anywhere. We never find enough about Robin’s inner thoughts though the end scene where they exchange views is excellently poised. What the episode does achieve though is a great match between dialogue and action plus enough fire filled action sequences to keep restless viewers happy. Having the robots fire their death rays through crosses in their helmets seems quite a bold choice considering there are lots of other ways they could do it. That it goes unremarked upon in the script is interesting. As you’d expect Gatiss manages to work in a number of continuity references and at times has a clever way of mirroring aspects of `The Time Warrior`, the story which this most resembles in locale if not intent.
With its flippant tone and sense of fun, `Robot of Sherwood` may never reach or even aspire to reach poll topping heights and you certainly wouldn’t want the series to be like this every week. Yet it is proof that broad comedy can work on the show and I imagine that long after we’ve tired of re-watching the more serious or significant episodes of this season it will be this one we’ll come back to for a bit of fun.