Doctor Who The Caretaker

Alfred Hitchcock, as well as making walk-on appearances in most of his notable films, was extremely fond of plot devices that had little or no bearing on the development of his narratives.  Film historians coined a term for this phenomenon: the McGuffin. Gareth Roberts’ previous forays into televised Who have all had their own version of this particular magician’s trick: 2007’s ‘The Shakespeare Code’ saw witch-like creatures trying to enter our universe by, literally, rewriting the great Bard’s text.  2010’s ‘The Lodger’ used disappearing tenants as an excuse for Matt Smith’s Doctor to spend a week as an ‘ordinary person’, playing both football and inadvertent matchmaker to James Corden’s likeable Craig; the following year’s ‘Closing Time’ likewise had an invasion of Cybermen help Craig bond with his new-born son.  Tonight’s Coal-Hill school set ‘invasion’ by a one-robot force of destruction does little more than frame Clara’s increasingly frantic double life of school-teaching and blossoming romance with the TARDIS travelling that is by now dominating her life. 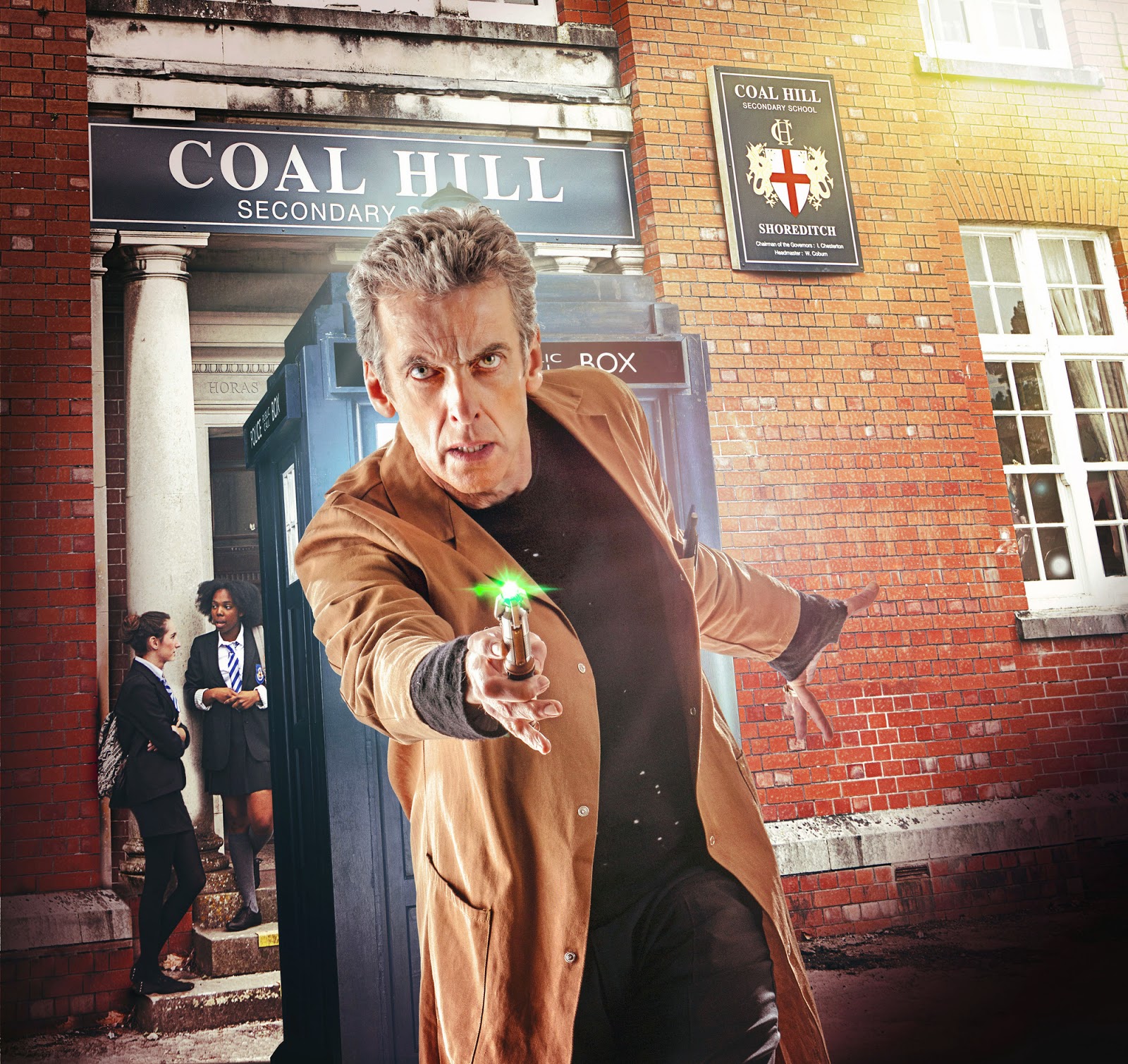 SPOILERS PAST THIS POINT

If you hadn’t already worked it out ‘The Caretaker’ is this year’s entry into the kind of knockabout, tongue-in-cheek fare that writer Gareth Roberts first cut his teeth on in a couple of still well-regarded Virgin novels in the mid-90s.  As Series 8 continues to play fast and loose with both light and dark, ‘The Caretaker’s position between the Hustle-lite slickness of ‘Time Heist’ with what promises to be a walk on the grim side in Peter Harness’ debut ‘Kill the Moon’ illustrates once again Doctor Who’s propensity for hi-jinks along with the horror.  Of course, the very notion of an episode with the Doctor going ‘undercover’ is nothing fresh, and one that Roberts himself has previously mined to effect.  But it’s refreshing to say to all the naysayers who are starting to bleat that the 12th Doctor lacks the humorous chops that his predecessor had that this is a tour-de-force in the kind of effortless comic timing that made Peter Capaldi’s name in The Thick of It (expletives notwithstanding…)


It’s also a chance for Samuel Anderson to step out of the shadow of being Clara’s beau, finally waking up to the inconsistencies in his girlfriend’s lifestyle that come from trans-temporal travelling.  Danny Pink is clearly a man looking to escape his past (like the Doctor) with a nose for knowing when he’s being lied to (like the Doctor) and a fondness for Clara that threatens to usurp her ‘other’ relationship (I think there’s a pattern emerging her…) How this pans out is as potentially intriguing as the semi-regular trips to the Promised Land (now given the alternative title ‘the nether-sphere’ and former Capaldi sparring-mate Chris Addison as the hereafter’s latest employee) and where exactly Danny the Soldier and Danny the maths teacher fits in what promises to be a characteristically apocalyptic finale.  By episode end there is at least a grudging respect between Clara’s (now confirmed) love interest and the ‘former’ boyfriend, stroke father-figure that clearly still feels he should come first in her life (the Doctor mistakenly believing it’s the bow-tie wearing foppish colleague who is Clara’s plus-one speaking several volumes…)


With (most) of the cards now on the table, it’s only a matter of time before Mr Pink (am I the only person who keeps thinking Steve Buscemi.,,?) wants to get more hands-on with Clara’s other life; though I think it’s safe to say that the animosity between ‘Sergeant’ Pink and ‘Officer’ Doctor is never going to be less than a grudging mutual respect.  The Doctor has long needed soldiers in his life to sometimes wash his dirty linen, and both Danny and the former ‘War Doctor’ may yet come to find they have more in common than either think.


At the end of the day ‘The Caretaker’ is more diverting fluff than game-changer, and is as concerned with putting certain pieces into their place than ploughing new territory.  The fact Danny doesn’t now join the TARDIS crew (and create the kind of eternal triangle not seen since Mickey Smith and Doctor 9 clashed over a certain Rose Tyler) gives the show some breathing space, and with the iconoclastic Courtney Woods having earned her spurs for at least one time-trip we may be spared the next instalment in the Doctor/Danny rivalry for a good few episodes yet…