BBC One, 13/09/14 starring: Peter Capaldi, Jenna Coleman, Samuel Anderson, Robert Goodman / Written by Steven Moffat / Directed by Douglas MacKinnon
Reviewed by Sean Alexander
Are we ever truly alone..?  Travelling solo in the TARDIS – whilst Clara is out on her inaugural (not to mention, disastrous) date with colleague Danny Pink - the Doctor speculates on the nature of solitude.  What is left when everything else is gone, and do nursery rhymes that allow children to whistle in the dark when alone and scared hide a greater monster than the one under the bed?
SPOILERS BEYOND THIS POINT 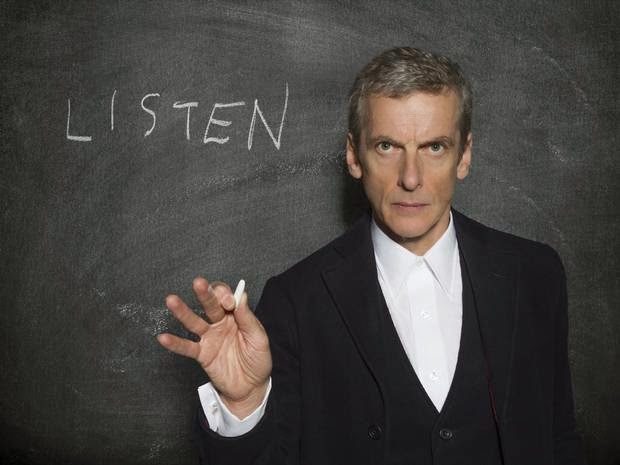 I’ve lost count of the times the success of Doctor Who comes down to the basic, primal fears that enter our lives in childhood and never truly go away.  ‘Listen’ is another, and in this case exemplary, example of that.  If you ever thought the fifty year-plus show was ever showing signs of losing the fear factor, then think again.  Steven Moffat’s most accomplished script since ‘Blink’ is a roller-coaster ride in the kind of moments that lead to that eternal cliché of ‘behind the sofa’ memories; and it’s safe to say that childish dreams this weekend will be full of amorphous blanket monsters and cold hands grabbing ankles from under the bed.  If there’s a national pandemic of bedwetting over the next week then please address all complaints to S. Moffat, Cardiff.


But the genius – and it’s been a few years since I used that adjective with regard to Doctor Who’s current pilot – of ‘Listen’ is its layered onion of plot, emotion and volte-face misdirection as each skin yields a greater understanding of its nature.  What seems to be a character-filling piece of exposition for Clara’s beau-in-waiting takes a sudden lurch into the heart of this show’s very mythology, revealing questions long thought answered whilst playing another riff on the Doctor’s current plus-one as the ‘Impossible Girl’.  If there’s been any remaining doubt that Clara Oswald is the most important companion in the Doctor’s (many) lives, ‘Listen’ pretty much nails its answer to the TARDIS blackboard; becoming as much a talisman of hope from centuries past that helps shape a Time Lord’s destiny from under his very bed.  Oh Doctor, so lonely then and even lonelier now…


Superlatives seem irrelevant here as the combination of literate script, atmospheric direction and an ensemble of pin-perfect performances make for a sublime forty-five minutes that grip until the very end.  By tying Clara into the TARDIS’ telepathic circuits – and by extension mainlining the Doctor himself – Moffat once again holds licence to redefine this assumedly known television icon in ways only the most fannish of fan-fiction would ever dare.   By the end, not only are we given an insight into the Doctor’s lonely and anguished upbringing (the latest of several parallels with former soldier Danny Pink to be drawn, and that’s without even mentioning the PTSD hangover both share) but Clara’s empathic understanding of both Danny and the Doctor’s wounded characters suggest that this is far from being the last time she is torn between Lord and lover this series.


The idea of a shared experience, whether it’s through a race memory dream or a mutual suffering, is a resonant message that tolls throughout this episode much like the TARDIS’ cloister bell.  What appears to be a simple, cathartic exploration of why Clara and Danny’s first date goes so disastrously wrong (with Clara’s time traveller status allowing her to make amends much sooner than for the likes of you or I) is by episode’s end an exploration of what makes the Doctor afraid, and how that fear has made him the man that he is.  Without ploughing the well-worn furrow of the post Time War ‘survivor guilt’ Doctor one more time, ‘Listen’ instead adds a fresher, more optimistic twist to the tale of the lonely boy who became a lonely God.  Only this time with the strength that comes through fear, rather than the weakness.  ‘Fear makes companions of us all’, says Clara, paraphrasing the very first Doctor as he first set out to become the hero he is.  And reminding all those children in playgrounds across the country that being scared is the first step towards becoming strong.


There’s a lot here also that absolutely screams to be capitalised on as this series unfolds: is the Doctor responsible for Danny’s future career as a soldier by simply implanting an image in his (child) mind’s eye?  And does the future Colonel Orson Pink of the early 22nd century have more of a part to play in future events, given his strong ancestral links to his great-grandfather?  And seeing as we don’t see what’s knocking on that airlock door at the end of the universe, is this yet another terror with a payback still to come?  It’s also very neat to introduce the Doctor to the new man in Clara’s life by not introducing him, merely suggesting that there’s more to the lonely boy in the children’s home or the pioneering time-traveller than meets the eye.  I wonder if the Doctor eventually does notice the strong family resemblance in a fortnight’s time?


Safe to say then that ‘Listen’ is as fine as Doctor Who has come in a long time: clever, involving and hinting at even further greatness to come.  2014 has certainly seen Steven Moffat get his mojo back and with his name rubber-stamped on what promises to be a rewarding season finale, Doctor Who has at last regained the status of compelling drama that the anniversary celebrations of last year only hinted at.  And that alone is reason enough again to be afraid of what’s under the bed at night…