Reviewed by Chris Arnsby. Mike Read: “Hello, another great edition of Top of the Pops lined up for you tonight. Bruno Brookes and myself have escaped from Radio 1, just for the night.” Bruno Brookes: “Right, and we're going to get going with Howard Jones at number 6, and Things Can Only Get Better!”


[6] Howard Jones: Things Can Only Get Better. Tonight's episode of Top of the Pops went out at 7.30pm, between episode two of Eastenders ('That baby don't come into this house. Either you get rid of it, or I get rid of you'.) and Happy Returns the first episode of series four of Only Fools And Horses. Howard Jones is back with his ever-growing entourage. We're up to eight people now; a guitarist, three backing singers, a three-piece brass section, and drummer Trevor Morais who is unfashionably hirsute for 1985. There's lot of placeholder “whoa, whoa, whoa, whoa, whoa, whoa,” lyrics in this song but just as they are getting repetitive a surprise guest appears. Charlie Chaplin, who looks good and moves well for someone who died in 1977.
It's actually Dancing Jed, who you may remember from 1983 and New Song, the Howard Jones debut single. He does a creditable impression of Charlie Chaplin and capers well. I can't actually work out why he's here but, why not? Maybe the Three Stooges will appear later to liven up I Know Him So Well. Dancing Jed takes Howard Jones' entourage up to nine. I hate to think what his band on-costs are like. 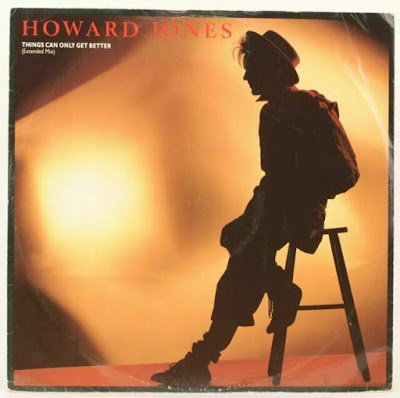 [20] Shape & Numan: Change Your Mind. Things Can Only Get Better - Change Your Mind. Is Top of the Pops sending me subliminal messages? The next song is Let's Go Crazy. So apparently the answer is yes. The television set is talking to me and the toaster is plotting to replace me with an identical duplicate. Fortunately I have thwarted the toaster's plans by unplugged it and thus remain the supreme being of the household. Gary Numan has painted himself white. No change there. But unfortunately he's rolled up his shirt sleeves to reveal non-white painted skin and disappointingly hairy forearms. Gary Numan should really shave his body hair if he's going to commit to his emotionless mandroid look. Except it's 1985. Men didn't shave their body hair in 1985. If you suggested it to Gary Numan he'd say, “no that's weird.”


Top 40 Chart Busters: The Top 40 Breakers have been renamed and the Graphics Department has made a new caption slide. Presumably the BBC was trying to burn through it's stockpile of coloured Letraset before the end of the financial year. 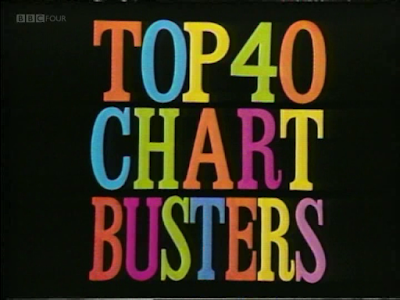 Unfortunately the new title just makes me think of the chestburster from Alien. This week's Top 40 Chest Busters are Prince, Let's Go Crazy; Mick Jagger, Just Another Night; ZZ Top, Legs; and Little Benny & The Masters, Who Comes To Boogie.


[22] Don Henley: The Boys Of Summer. No one falls off the stage. No one is dressed like an idiot. The audience all behave themselves and don't attempt to bounce balloons on Don Henley's face. Jed doesn't dress like Harold Lloyd and hang from the scenery. A professional performance all round. How boring. (John- This is an excellent song though about looking back on great summers past and things that may have happened.)


[11] Bryan Adams: Run To You. “We've flown him from Europe to be with us tonight,” says Bruno Brookes. (John- Surely he should have run!) From Finland, to be precise, where the Reckless tour had just played the Jäähalli, Helsinki. By the time this episode of Top of the Pops broadcast Bryan Adams was back on tour, now in Norway appearing at the Drammenshallen in Drammen.I'm going to go out on a limb and guess that the English translation of Drammenshallen is Drammen's Hall. I don't know what Jäähalli means... something hall?


[6]  Howard Jones: Things Can Only Get Better.


[4] Bruce Springsteen: Dancing In The Dark.


[1] Elaine Paige & Barbara Dickson: I Know Him So Well. A remarkably static Top 10. Bruce Springsteen, Ashford & Simpson, King, and Elaine Paige & Barbara Dickson. Haven't moved since last week. Poor King have been stalled at number 2 for three weeks. Kept off the number 1 spot by everyone buying I Know Him So Well for their aunt's birthday. (John- What are you implying about their Auntie?)

[30] Eddy & The Soulband: Shaft. Top of the Pops plays out with Eddy & The Soulband's bowdlerised version of Isaac Hayes Theme From Shaft. No damns here, also out is the “you see this cat Shaft is a bad mother/shut your mouth,” exchange. There's nothing to offend the ear or get in the way of that precious radio airplay.


Performance of the week: Don Henley : Boys Of Summer.