An episode that treads in well worn tv sci-fi footsteps, Johnny Byrne’s story paces to a slow reveal meaning its heavy going for the watcher. The Alphans encounter a huge city in space emitting an emergency call for help. Inside the vast place the mission crew variously discover two separate scenarios. As Koenig and Bergman chat to Joan Collins and learn of a race on a centuries long mission to find a new planet, Helena encounters the somewhat larger, hairier and sacrifice types who inhabit level 7. You can sort of see what’s coming though Byrne laces his script with some nasty incidents. These level seveners, led by a hysterically hammy Aubrey Morris in eye popping splendour, fillet out mutants and put them in a box that kills them with noise. Judging from the looks of the tribe that noise is Black Sabbath at maximum decibels. 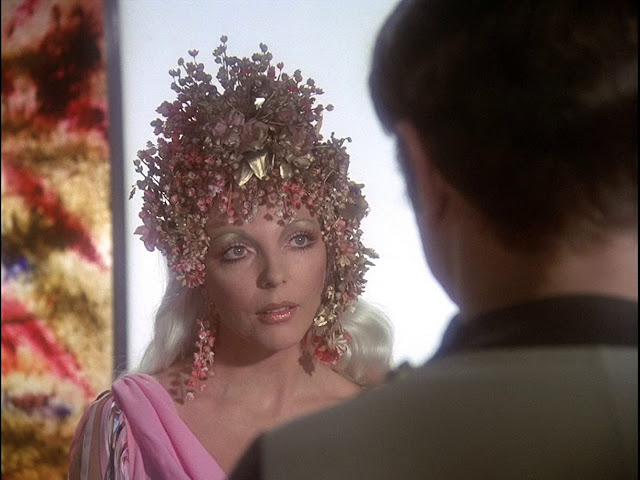 Ray Austin puts in some sterling work at the director’s helm rising to the story’s darker sensibilities and doing his best with the costume designer’s obvious preference for the camper side of things. The higher, original Darians are clothed in silk finery with Joan sporting a cherry tree in her hair. The level seven people are all leather, beards and ratty hair. What does impress is the scale of the production. Benefitting from corridors along which cameras actually have room to run and a brilliant matte shot of a walkway that threads into the distance- not to mention the impressive model work on the city’s exterior- the episode is ambitious to say the least. The violent acts are also supported by some intense incidental music.
On fine form again this week is Martin Landau and there’s also more to do for Nick Tate’s Alan Carter who actually precipitates the collapse of the set up on his own. Joan Collins is, well, Joan Collins and just about gets away with it though her reaction to the Darian’s race bank being destroyed is more like irritation at a hovering fly than the profound shock and sorrow that would be appropriate. I also found Dennis Burgess’ Neman not especially well written for the actor to do much with.
The eventual reveal of the original Darians extending their lives via some barely explained method is underplayed especially as once he’s discovered it, Koenig is quite prepared to help the two sides lives together. It’s a cheesy, unsatisfactory conclusion which may come straight from an optimist’s handbook but doesn’t really offer much justice for all those victims. All that final shot is missing is a bit of romantic music as unlikely coupling Joan Collins and Robert Russell eye each other up and down as they contemplate what they need to do to further the race. Quite why none of them thought of that earlier rather than setting up a convoluted and brutal scenario isn’t clear. Somehow the balance between the wisdom and the behaviour of the original Darians never quite squares for the viewer. We’re asked to take in both the vicious acts of half an hour earlier and this ending and it doesn’t seem to fit. 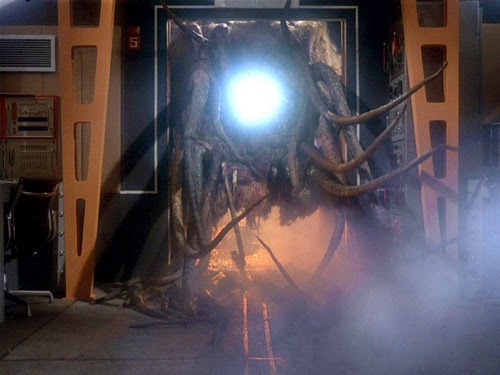 Dragon’s Domain
An unusually presented episode that doesn’t try too hard to square off all the corners leaving an intriguing mystery at the centre of events. Part flashback, part tilt at mythology `Dragon’s Domain` is the sort of story that Space 1999 does so well. Many series would be content to have their heroes discovering a graveyard of spaceships right away whereas Christopher Penfold’s well paced episode begins on Tony Cellini’s strange encounter with spinning metallic material. You wonder why he has his quarters decorated by axes and the answer becomes apparent as we learn of his involvement in a mission to the potentially inhabitable planet Ultra five years earlier. It’s the series’ first big continuity back reference (Ultra was mentioned in the first episode) and its expanded to show us the mission to explore the planet which ends in tragedy when some sort of multi tentacled space creature kills the other three crew with only Cellini surviving to make it back.
Koenig has a history with the project too- we see how a mere flip of a coin had Cellini rather than him undertaking the mission and this brings him into conflict with Helena who was involved in the subsequent medical enquiry and is somewhat sceptical about the monster. All these flashback scenes provide a far richer aspect than had it been related by one or other of the characters. We even get to discover that in the mid 1990s Helena liked to dress as if she was from the 1950s!
The episode does threaten to tumble at times due to guest actor Gianni Garko’s tendancy to over enunciate his Italian (almost as if he isn’t really Italian at all but with a name like that he must be) plus he doesn’t quite demonstrate the haunted qualities required for the character as written. However matters are anchored by strong performances from both Martin Landau and Barbara Bain whose characters represent opposing views on what happened. Due to his friendship with Cellini, Koenig is willing to believe him but Helena doesn’t. You might imagine after what they’ve been through since she might be more willing to give him the benefit of the doubt though.
Visually the monster has been criticised in retrospect but I do remember it back in the Seventies this was one of my favourite episodes because it had a big monster in it. The unnamed beast is certainly more convincing than some of those featured in rival Doctor Who and they manage to achieve the rare feat in any tv sci-fi of having convincingly moving suckers. Combined with a powerful roar and excellent lighting effects the results conjure up a pretty good creature. It’s method of sucking people into its mouth for them to slide out as husks moments later is gruesome indeed. That we learn precisely nothing about it doesn’t matter.
The ending is slightly disappointing as Cellini doesn’t get his victory after all and ends up as the last victim before Koenig despatches it. Given the allusions the final scene makes to St George and the Dragon and creating new mythologies surely it would have been better to have had Cellini rescue Koenig. The choreography looks a bit silly too because Cellini has an axe and is near enough to inflict wounds on the creature’s central eye thing which Koenig subsequently does with a similar weapon anyway. Its further evidence of the series’ overall heavy weighting in favour of its lead actor sometimes at the expense of the more interesting plot development. 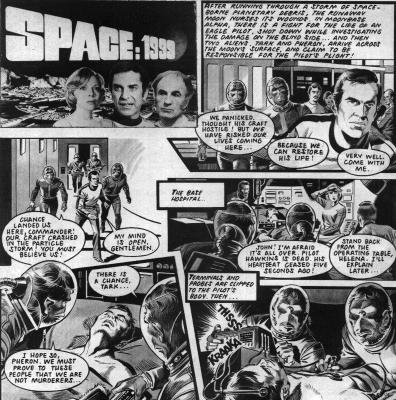