Space Brain
An opening montage of various crew members completing jigsaws of all things should be a warning that this is going to be an unconventional episode. From its schlocky pulp sci-fi title in there is nothing subtle about `Space Brain`. The puzzles incidentally are meant to be symbolic of the puzzle to come. The latest threat to Moonbase Alpha comes via strange patterns on the screens and then the disappearance of an Eagle investigating their source- a huge entity sitting in space. It appears to be trying to communicate with them and when this doesn’t work takes over an astronaut called Kelly via whom it talks to Computer. I still feel Computer should have an actual name rather than everyone just calling it “Computer”. What about Carl? Anyhow what transpires is a decently poised adventure in which it becomes apparent that the so called `space brain` is trying to survive what will be a collision with the Moon by any means it can. The one problem with the episode, atypically for this series, are the special effects. 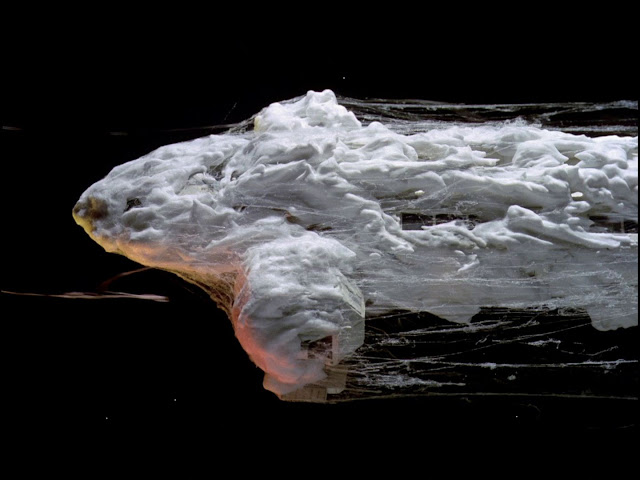 Space 1999 is often recalled more for its look than its content, which isn’t fair in the case of the first season, but you have to admit it always looks great. Except this episode falls at this hurdle with each visual choice seeming either clunky or just plain bizarre. It does get off to a good start with the rolling data on the screens which seems to be in an alien mathematical language but after that we have a giant boiled sweet, disco lights, silly string in space and lashings of foam! These are not meant to be amusing, indeed the aforementioned sweet is rather horribly the crushed remains of the missing Eagle and its crew, yet somehow I feel they wouldn’t really convince in the mid 70s and certainly don’t now. The foam is the worst offender especially as its arrival sweeping over the base and through the corridors is accompanied by the melodramatic sound of Holst’s `Mars- Bringer of War` of all things. It is supposed to be a material which surrounds and crushes objects but all it does is give the impression the crew are having an accidentally enormous bubble bath! It was probably fun for the actors and a nightmare for the camera crews but it really doesn’t seem threatening in any way.
The kernel of the story is about mis- communication between races but it is a theme that’s been handled better and with more dignity for the cast than here. Even if you ignore the visuals there is some enormous pseudo scientific leaping going on involving pressure, density and other key issues. I wonder why the brain couldn’t just use Kelly to talk to the Alphans and tell or warn them. Also if there are a lot of planets relying on the phenomena as suggested would it not have been a more believable plot to have one of them take action to save it?
Remarkably the cast manage to treat the thing with the seriousness we’re told it merits and this does help enormously though I had to laugh when at the end Victor pops up and his helmet is totally covered in foam. Martin Landau again proves an unstoppable force who does everyone’s job during the course of the episode (except mopping up the foam at the end) but now we have Doctor Bob seemingly having a stint at being a security officer.
“If only we could have communicated” laments Helena at the end. I was half expecting someone to reply, “If only we could have laughed” And yes someone does actually say “You must not touch my brain!” 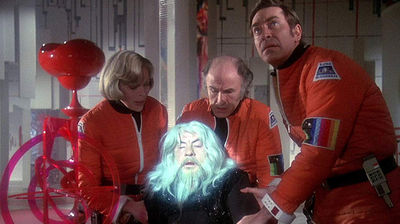 The Infernal Machine
A well poised encounter with a super computer manages to steer clear of at least some of the archetypes of this sort of plot being in the now established tradition of this season’s more throughtful episodes. Its odd how we tend to think of Space 1999 as an all action, explosive adventure series because while it has those moments they are rarely the crux of the storyline. Here, Alpha is somewhat overwhelmed by the driver of a strange looking spaceship (it’s got wheels!) which is actually a computer with a personality problem. Initially charming in an overbearing manner it gradually becomes increasingly aggressive in both tone and action as Koenig becomes more defiant.
Gwent as this being is known (a distracting moniker for Welsh viewers I imagine) seems to be all powerful and the narrative offers few possibilities for Koenig, Helena and Victor to escape its clutches once they’re on board. They spend most of the episode in a set that is as impressively enormous as it is somewhat underwhelmingly decorated. Director David Tomblin introduces it with a dramatic crane shot but it’s basically your standard Space 1999 alien set which basically looks like a weird art gallery or Ikea. What powers the episode though is the personality this computer possesses, linked to it’s companion played with big beard and theatrical preseence by Leo Mckern whose expressive tonsils also voice the unseen computer.
At first you think you know where this is all going- the companion is ill, he dies, surely Gwent will need a replacement. However as it turns out the emotional and mental connection between the two is far greater than expected and this brings out different sides to the being. There’s a cat and mouse game that becomes more fascinating as it develops and the Alphan trio start to see chinks in Gwent’s armour. Nothing as simple as cutting wires will do here; instead the denouement hinges on food in a way. After exchanges of fire that, as Koenig points out, cost both sides much the Alphans are forced to provide Gwent with the unspecified stuff he wants. Whereupon Koenig smashes a key component in defiance.
The two way exchanges between Gwent and Koenig rely on Martin Landau’s reaction shots and Leo Mckern’s rich voice because there isn’t must else to see and somehow it works to perfection. Both actors are superb.
The story’s origins are classical (as the title suggests) and writers Anthony Terpiloff and Elisabeth Burrows do an excellent job of reworking those influences (the famous Jacques Cocteau play of the same name and it’s own inspiration Sophocles’ Oedipius Rex) into something as ostensibly silly as a talking computer. In fact it is almost a pity when we sometimes cut to the more normal Eagles and explosions which jut oddly into what is at times more like watching a play.