The Last Enemy
As the Alphans check out two planets separated from each other by a Sun, one of them launches a mega battleship which cuts out Alpha’s defences and communications easily leaving them defenceless. However in an unexpected turn it is using the passing Moon to launch a surprise attack on its neighbour. We get an early glimpse into the Bethan planet which resembles nothing less than a chic 70s sitting room with white leather sofas and colourful adornments. It soon becomes clear that all the inhabitants of the planet are female something of an undermining of the traditional warrior type this and other series regularly show. The original idea for the story was apparently a literal battle of the sexes but thankfully this is all but excised from the final episode with no acknowledgment of the divide remaining in the finished production, This makes the production look somewhat forward thinking with Dione dressed more like a biker than in any floaty long dress of the sort most female aliens the Alphans met normally sported. 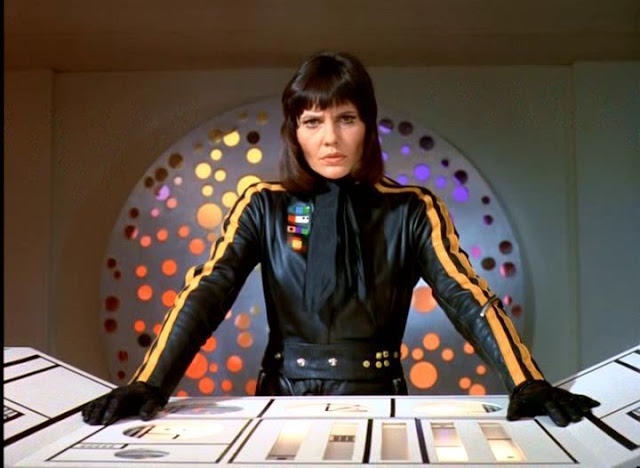 In fact the episode gets better as it goes along as a cat and mouse game develops with the Alphans caught in the middle. The two sides are soon using the Moon as a battlefield and some judicious budgetary restraint means we view much of this under a table with various crew members sheltering from the barrage outside. Missiles mostly come in threes (one time there are four- gasps!) as is the wont of all space objects including Eagles in this series. Catherine Mortimer makes a convincing and scheming commander Dione and its pleasing to see Kevin Stoney as the other planet Delta’s commander in chief. He really does talk with his eyes closed doesn’t he!


The episode does a good job of conveying the helplessness of the Moonbase’s predicament and also coming up with something of a bizarre ruse to get them out of it. In the end you feel that the clichéd idea of an attraction between Koenig and Dione might have better served the denouement. However the story has flaws- if both sides have spaceships then they can easily see what the other is up to and engage in endless dogfights in space. Dione says they’ve been waiting for years for something like the moon to turn up implying there has been no conflict in a long time. Alternatively if both worlds cannot see each other then why did a war break out in the first place?


The narrative offers no explanation as to how this conflict broke out. Very long lasting wars are something of a sci-fi trope and can go on for centuries with nobody really knowing why.  Usually it is the arrival of the regular characters that provides a different perspective or uncovers some secret, some flaw or something about it. Here, Koenig and co simply accept the status quo and move on. There’s an odd scene where Dione appears to be able to teleport yet this is never commented on or used again. Meanwhile Helena’s grasp on fact become somewhat elusive- during the final bombardment she runs in to tell Koenig the base can’t take much more implying loads of casualties yet minutes later she describes only five minor injuries!At times it can be a bit procedural with its array of defensive systems, launches and incoming missiles but when the action comes a combination of clever lighting and sound together with the usual explosive model shots manage to convey the danger very well.


The denouement is bizarre. We see Koenig appearing to turn on his crewmates to join Dione as a ruse to send an armed lunar vehicle to blow up their ship. According to various online resources about the series this was added at the last minute due to an under running episode but it does not explain why Dione was willing to consider the offer which comes out of nowhere. Having shown how wily she is up till then there is no convincing way she would believe this was anything but a trick. `The Last Enemy` works best as a thriller which keeps its intentions hidden and provides some genuine thrills as the Alphans try to survive what seem like large odds. 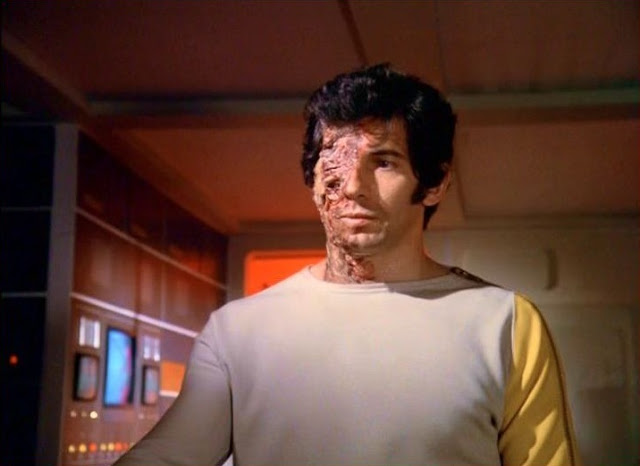 The Troubled Spirit
It is surprising how effective horror can be even in the brightly lit corridors of Moonbase Alpha. This atypical episode concentrates on a threat much closer than any visiting alien when some frankly odd experiments yield even odder results. Italian scientist Matheo is attempting to communicate with plants. Well this was written in the Seventies when such things were seen as possible perhaps through the haze of something strong or maybe in the pages of alternative science books. This Johnny Byrne penned story is somewhat unconvincing in its methods but the results are something rather better.


It opens with a grandstanding tracking shot that takes us from a psychedelic sitar concert along a corridor and into a hydroponics lab where the strange sounds are making leaves rustle and Matheo break into a sweat. Suddenly the temperature drops all over Alpha and if it wasn’t for elder scientist James Warren who knows what might have happened. The sitar music (specially composed and played by Jim Sullivan) adds an uneasy atmosphere to support the direction conjuring up a very Seventies vibe.

As things progress we learn that a psychic spirit or ghost is stalking Alpha seemingly to carry out the angry whims from Matheo’s subconscious. It manifests itself rather gruesomely as a man half of whose face and one hand are covered in terrible burns. The Seventies were fertile ground for alternative theories and the episode also plays into ancient tales of people being foretold their own death by some sort of apparition of themselves though this version has nothing to say, he simply looks nasty. Nobody takes the intuitive leap that surely the spirit is a warning as to what Mateo’s fate will be neither is it clear why something derived from psychic interaction with plant life would be so selectively dangerous. Is Mateo controlling it somehow?

Shrouded in shadow (the use of light in this episode is terrific) this apparition looks rather too convincing for a children’s show and would certainly have given me a few nightmares back in the day.As we’ve learned in this series nothing is too odd to defy examination and investigation hence we end up with all of the base’s senior officers engaged in a scientific sceance. You think they’d have left someone in the control room just in case. Watching the character’s reactions to the unfolding gusts of wind, noises and squirming of Matheo is amusing and threatens to undercut the mood. Grumpy Paul for example looks as grumpy as usual. Alan’s expression suggests he’s already mentally lighting the barbie. As for Koenig he looks a bit bored by this episode even though at the end he blames himself for Matheo’s ultimate demise. Well it was his idea to trap the poor guy inside a forcefield and try to `bring out` that troubled spirit. It seems a cruel resolution which Victor is up for to. Helena’s reaction to what happens probably best sums up that f the viewer. Also once this trap is set its obvious how it will play out robbing the ending of some tension.

This is a very well mounted episode, the special music enhancing the spooky happenings and Ray Austin’s busy cameras rallying to ever visual opportunity. If you saw the plot written down it would seem ridiculous but on screen it has a raw power and an instinctive sense of fear.