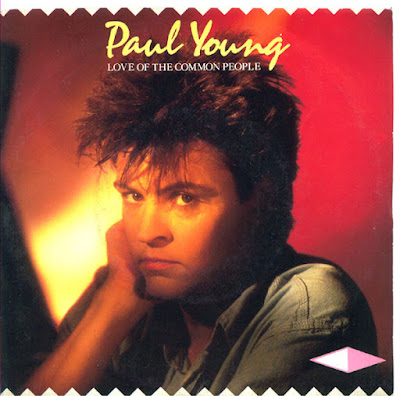 [16] Tina Turner: Let's Stay Together. Simon Bates is branching out from telling the time and getting into birthday reminders. "It's Tina Turner's birthday on Saturday," but "she's in Dubai." Oh no! That means she'll miss The Five Doctors tomorrow (1983 time). Still, here's here latest video. Happy birthday Tina for 35 years ago.


[30] The Smiths: This Charming Man. The Gladioli brandishing performance.


[30] The Smiths: This Charming Man. In 1983 I was too young for The Smiths. When I think back to the bands that stick in my memory it's an eclectic collection; Queen, The Human League, Madness, Adam & The Ants, Blondie, and David Bowie (whose career began with Let's Dance). I also remember a disturbing number of novelty songs like The Oldest Swinger In Town, Arthur Daley E's Alright, and The Smurfs. BBC4 hasn't got to the Chicken Song yet but I've got a nasty suspicion I could recite that song from memory. After that I got into computers and endless arguments about whether the ZX Spectrum was better than the Commodore 64 (it was), trying to POKE Jet Set Willy, and searching for all the alchiems in Nodes of Yesod. I read Crash, not Smash Hits. John Peel was just one of rotating series of Top of the Pops presenters and Radio One ended with Newsbeat at 5.30. Only one of my friends was really into music and he made a doomed attempt to get me to like Frank Zappa, which did at least leave me with an appreciation for the cover of Weasels Ripped My Flesh. NB, that's the cover, not the contents. I've always felt that actually listening to the album would spoil things. The Smiths just passed me by. Watching them now is with 35 years of hindsight; the royalty dispute; Morrissey's increasingly desperate attempts to stay in the news by saying controversial things; and so on, and so on. The trouble is, I'm aware The Smiths mean a lot to people who aren't me and I don't know what to write except for a whinging self-justification about why I have nothing to write. I thought This Charming Man was good. It's rotten of Morrissey to chuck those Gladioli on the floor for someone else to pick up.


This might be one of those occasions when John ends up writing a proper comment in brackets. Over to you John? (John- Errrrrrr......no.)


[14] Thompson Twins: Hold Me Now. Morrissey's performance of This Charming Man is a good example of how to be disruptive and stand out without sending up the programme or being contemptuous of the viewers. Madness used to manage this effortlessly, fuelled by the contents of the BBC bar. Kate Bush looked and sounded like nothing anyone had seen before. Boy George provoked identity confusion. New Order turned in a diabolical version of Blue Monday (because they're proper musicians who play live and don't mime like those phonies) but it didn't seem to do any real harm. The exception to this rule is of course The Stranglers whose every appearance boiled with contempt for Top of the Pops, the studio audience, the viewers at home, and in short anyone who wasn't in The Stranglers. They got round this by being frightening and hard. Anyway, Morrissey's Gladioli waving performance is a textbook way to get the "did you see," "what was that all about" conversation going the next day and I mention it only because it manages to make The Thompson Twins seem very staid. 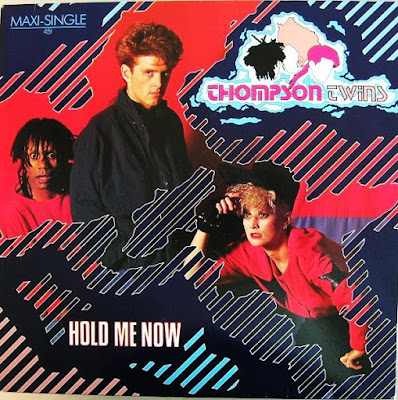 [9] Marilyn: Calling Your Name. Simon Bates is getting frisky. He chuckles like Doctor Hibbert and says "it's turning into a loony night," at some zany off screen antics the viewer isn't allowed to see; someone had probably put on a hat or something. "It's only 15 minutes to eight," he adds. Continuing his woeful series of vague time checks. Marilyn's on the same stage used by The Smiths and it's a good demonstration of how the BBC could quickly make a few lighting tweaks and change the appearance of a set. Bert Postlethwaite (Lighting) coloured The Smiths an appropriate murky purple. He dials back the purple for Marilyn, brings in a bit of white to highlight the set, and lights the disco ball more prominently. The set has also been cleared of Gladioli. This is good because it reduces the potential for slip hazards and also allows the viewer to see Top of the Pops' new floor effect. It's a series of lights under glass that can be set to different patterns. For The Smiths it was a display of boring squares. For Marilyn it's more dynamic. A flashing pattern that looks like the kind of LED graphic equalizer you find on a cheap hifi.


[25] Simple Minds: Waterfront. Drummer Mel Gaynor starts the song seated, but towards the end he stands up and pounds those drums as if it's the only thing stopping them from leaping up and attacking him. 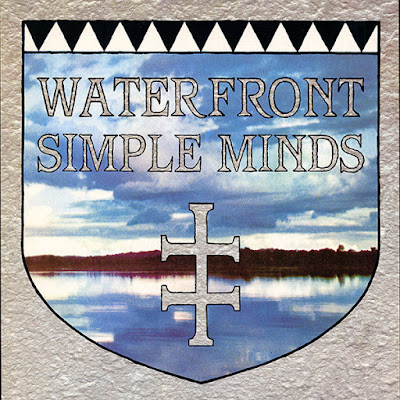 [11] The Style Council: A Solid Bond In Your Heart. The promo film, shot on location at the glamorous Woking Football Club.


[15] Eurythmics: Right By Your Side. And that's it. Crowd dancing shots and credits.
Posted by John Connors at 22:51