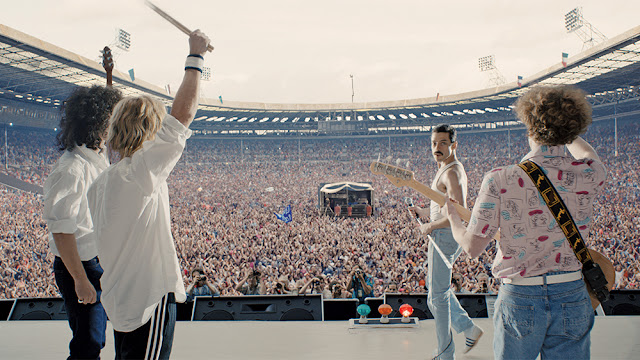 The narrative opens on the morning of Live Aid but inches from walking on stage, we cut back to 1970 and follow the story of how Tanzanian born Farrokh Bulsara became rock legend Freddie Mercury. There’s a necessary truncation of events which will probably niggle Queen fans- for example Freddie is seen to first meet and then join Queen the same night their original singer leaves whereas these events spanned a longer period. `We Will Rock You`’s genesis in an exhuberant studio scene seems too late chronologically whereas those `Fat Bottomed Girls` show up too soon. And though the band say they haven’t played together `for years` before Live Aid, Queen did tour in 1984. In general though the through line follows the well known tale.
In truth Queen’s career was not especially packed with significant moments. It was the traditional Seventies slow build of each album out selling the previous one while in studio the differing musical outlooks of the four members provides the rich variety the group brought to the rock template.  So to give the film more of a central hook, we follow Mercury’s path which also makes matters less episodic than they might have been. Fab old fashioned spinning headlines and concert montages smooth over the time jumps to some extent. 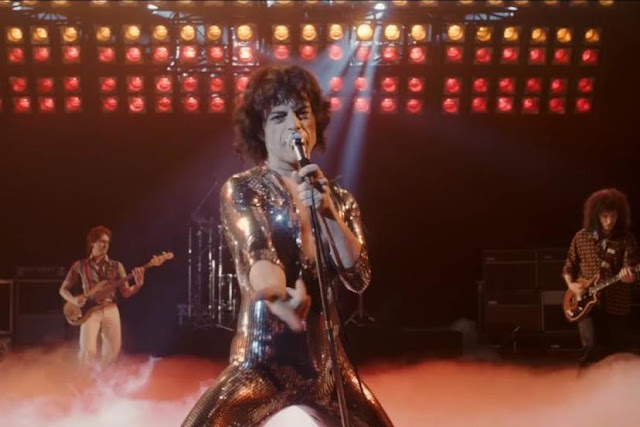 Though early reviews claimed Freddie’s conflicted sexuality was absent it is glimpsed more often than you’d expect – any more and it would be a wholly different film. There are enough nods to the fact that other members had their indulgent moments too.
Freddie’s personality clashes with the others and particularly with record company EMI – represented here by a composite fictional character Ray Moore (played by an unrecognisable Mike Myers) – are well essayed and the film definitely alludes to his wayward off stage behaviour. What work surprisingly well are the band meetings where the script and actors bring out the differing personalities. Sometimes they look uncannily like the real life characters. Thus the in studio parts turn out to be much more entertaining than you’d imagine with the personalities clashing over all sorts of things- the scene where the merits of Roger Taylor’s song `I’m In Love With My Car`  are debated is fun while `Bohemian Rhapsody` itself gets plenty of attention culminating in an amusing confrontation with EMI over its release.
Gwilym Lee’s Brian May is spot on, looking and sounding exactly like the guitarist. A less showy role than Freddie perhaps but this is a very strong performance. Roger Taylor deserves kudos for allowing a rather unflattering portrait of himself as the drummer comes over as being a bit of an undiplomatic idiot several times. This gives Ben Hardy the opportunity for a great performance bringing Taylor to the forefront on several occasions. As John Deacon, Joe Mazzello has the bassist’s inscrutable very English manner down to a tee. There’s memorable turns too from Lucy Boynton as Mary Austin, Tom Hollander as manager Jim Beach and Allan Leach as Paul Prenter who is handed much of the blame for leading Freddie off track. 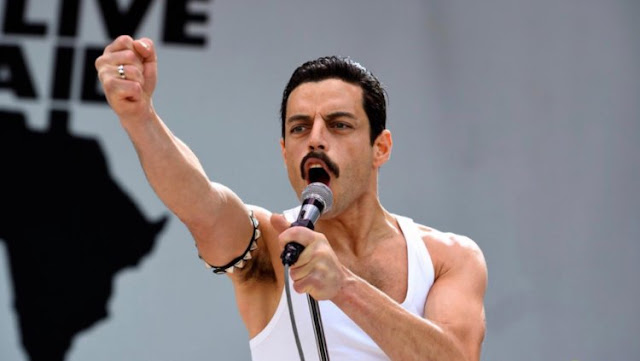 Its fantastic casting all round but of course centre stage is held by a remarkable one from Rami Malek. He steps into the persona of Freddie Mercury with skill, deftly reproducing his performances and hold over audiences. Even more importantly he catches the more awkward Mercury off stage; his loneliness, need for attention and playfulness too. Its all there in what is surely one of the big screen performances of the year.
Given their aim of making the film as much a celebration of Queen’s music than anything its surprising that the biggest time shift is bringing forward Freddie’s HIV diagnosis and his telling the band to before Live Aid. Unless all the information we have about this has been wrong this all happened a couple of years later. It’s a bold move that plays well cinematically and which they didn’t have to do.
In a sense the film does changes its approach whenever Mercury’s private life comes into view and judges it from the other members’ perspective which is what has led some critics to suggest it’s a sanitised view but does anyone really want to see those legendary parties in detail?  Even if not directly this aspect is implicit though in a certain guilt and doubt that creeps across the character though there is no reason why the singer would not have those feelings. Perhaps an easier  - but less entertaining option -would have been a more serious study of Freddie Mercury but that would need to be a separate exercise to the Queen story and what purpose would it serve other than to sate some people’s endless appetite for scandal? 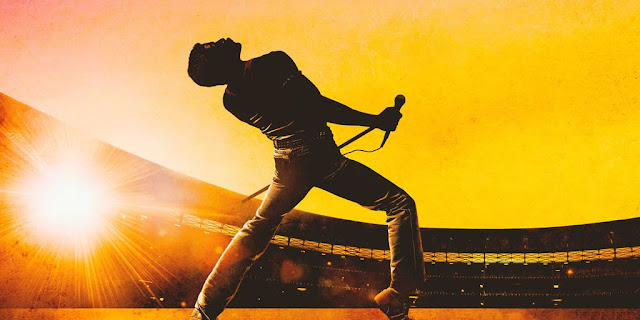 The Live Aid sequence is stunning; the cameras swooping over the crowd and onto the stage- there’s even a (non- swearing) Bob Gedolf. When the crowd join in with `We Are the Champions` or clap along in unison with `Radio Gaga` the effect is amazing giving us all a taste of what it must have been like to have been up there on stage. In fact all of the concert scenes do a fantastic job of capturing a band in their pomp and splendour. For those of us who never saw Queen live it almost feels like we now have.
Despite the behind the scenes troubles which saw Bryan Singer leave before filming was finished, Bohemian Rhapsody is about as good as any music biopic could be, anchored by strong performances, especially from Rami Malek. It successfully takes you into the concert hall and the studio with a light touch script that some may find slim but which suits the mood and tells the story. More than anything it re-affirms that Queen have few peers when it comes to foot stamping, riff grinding, anthemic and memorable songs. As promised they do rock you and they are still the Champions!

Bismillah!!
#    # I remember when `Bohemian Rhapsody` the song first came out back in 1975. In those days most music you heard was on tinny radios with dodgy sound. So for ages we were puzzled by the lyric- in particular why Freddie might be back “six times tomorrow” and would not let Mitch Miller go. Well we had nobody at school called Bismillah!
·    #  Humpybong! This group gets a mention in the film being the one pre Queen group Smile singer Tim Stafell left to join. They could well be the most obscure real band ever to be referenced in a movie! But literally nobody asks – whatever happened to Humbybong? Well not much as it goes. They released a single, filmed two Top of the Pops appearances and then broke up without playing a gig. But just think if Tim hadn’t joined them we might never have heard of Freddie Mercury.
·    # There’s a great scene where the band are arguing and Freddie disdainfully summarises how he imagines the other’s lives would have turned out had he not met them. For Brian May this means he would have published books about the Cosmos. In fact he later did just that in real life!
·    # Whatever happened to John Deacon? Only Kate Bush is a more reclusive famous person these days. Apparently Deacon resides in a wealthy part of London living a normal life. Or as normal life as a multi millionaire former rock star can. He’s taken no part in Queen activities since the mid Nineties. The current state of his ever changing hair is unknown!