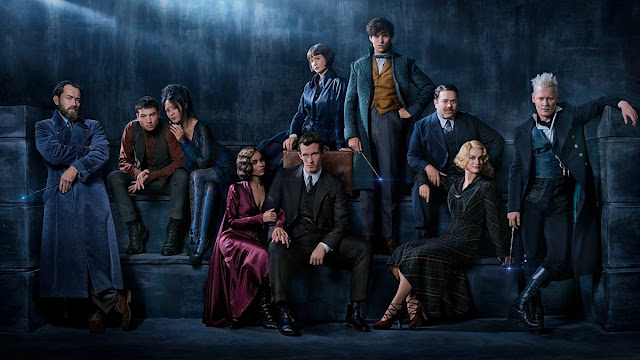 What made the first film in the series stand apart from the Potter movies was a real sense of a different time and place. The Manhattan of 1926 setting suited Scamander’s chasing about after the escaped beasts and the film rested on Eddie Redmayne’s excellent scatty performance of the socially awkward character and the animals he was protecting. There was also the rich sub plot involving Queenie and Jacob. For all the magical moments it felt like a film with a relatable human side. Much of this appeal is absent from this follow up with Scamander constantly sidelined by a convoluted and not especially gripping plot about a wizarding revolt.
The scheming Grindelwald- a decent enough turn from Johnny Depp- considers Credence (an underserved Ezra Miller) the key to this and much of the running time concerns various people trying to find out who he is. Except Grindelwald knows the whole time but wants him to find out his own way. He may as well have actually said; “I will not tell him till the end of the film!” Depp musters enough villainy to have a better plot than this. Worse the Queenie / Jacob storyline is very odd and confusing lacking the light touch that made them such an interesting couple first time round. Her big decision at the end is baffling.


To be honest my attention wandered from the sluggish pace and uninvolving conversations though a visit to Hogwarts livens things up a little. Here we find Jude Law portraying a young Dumbledore seeming most unlike Michael Gambon but bringing some sparkle to a movie otherwise mostly populated by one note characters. The problem with some of JK Rowling’s plotting is it has the canter of a book where it needs the rush of a movie. Lots of people talk seriously in very dark rooms and she has invented some sort of blood pact between Dumbledore and Grindelwald (yes they knew each other when they younger to nobody’s surprise) meaning the latter has to be stopped by Scamander and his brother who is in the Ministry of Magic. The dense plotting has to work very hard to fashion some sort of climax which is a speech wherein Grindelwald addresses thousands of wizards about rising up and revealing themselves. There’s no attempt to make this analogous to any contemporary scenario which is an opportunity missed. The speech itself is uninspiring even though Depp does his best to pump some feeling into it.


There’s still a range of excellent effects sequences but the Paris location is not treated with the same care as New York was.  Paris as depicted here could be anywhere- they don’t even have a climax on the Eiffel Tower! The beasts are interesting particularly a Chinese dragon that provides what feels like the only real peril till the effective blue flames at the end. Eddie Redmayne’s Newt remains an engaging character even though he seems at risk of being overlooked in his own story.


This movie shows that the minutiae of the wizarding world is not interesting enough to be the main focus of a film especially as all the dark portents and warnings only ever turn into fairly tame action. Judging from the ending we’re wading deeper into a story that doesn’t really need telling and which is unlikely to hold many surprises. If this film series is going to work it needs to re-discover its own USP from the first film and become a fierce as some of its creatures as this film is a long way from fantastic.
Posted by John Connors at 22:01