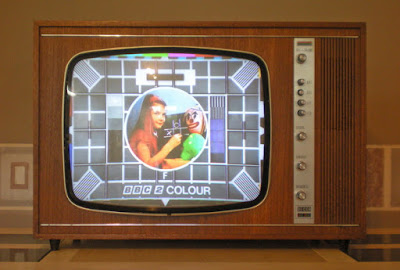 It is difficult to imagine a time when there wasn’t television and this Wednesday 2 November marks the 80th anniversary of the start of broadcast television. Television sets however have origins dating back to the 19th century and a tangled history of development. They’ve changed a lot over the years from chunky pieces of furniture to sleek screens and there have been some things about them that certain generations might never quite forget!
The remote!
We love our remotes (though some endlessly channel hopping people like them too much!) but consider just how people fared before they were invented. You actually had to get up out of your chair, cross the room and push a chunky button to change channel. This is why many people used to say they “only watched BBC” because they didn’t want to get up out of the seat. In the 70s people would create ingenious homemade devices to save them the mighty effort of rising from their beige sofas. Any long pole- a snooker cue perhaps or a brush handle - could be used to prod the buttons from a distance. This was in many ways the first remote. The actual first remote was attached to the set by a wire which could prove risky for Tiddles the cat if he didn’t see it or even short sighted Gran who’d be toppling over as she made for the sherry without looking where she was going.


Random Hold
Old analogue sets had this thing where every so often, for absolutely no reason the picture would roll over. So you’d still have the sound but the picture would keep rolling over until you undertook the tried and tested engineering task of banging the tv set and swearing. That usually did the trick.
What was at the back of the tv set?
It’s amazing how slim modern screens are – whatever happened to all that stuff that used to stick out of the back of a tv set? Some of them were so big it took two people to move them while the dimensions of that bit that stuck out at the back matched a modest London bedsit. Nobody ever knew what was inside the cathode ray tube though you suspected it was actually All Of Television in miniaturised form. And was that a mini Gordon Honeycombe creeping out from behind the set to go to Woolworths?
Shutdown
When you switched an old TV off the picture would be sucked into the back of the screen like water running down a sink plug hole. However if it did this when you were in the middle of watching something it meant that the TV had blown out and a trip to Rediffusion for a new one was on.
Thunderbolt and lightning, very, very frightening
The biggest thing about television back then was the idea that if there was lightning it could hit the aerial and if you had the tv on the lighting would explode out of the set. So the advice from experts was that if there was a thunderstorm you should switch the set off AT THE WALL. That’s right, turning it off was not enough to stop the lightning, oh no, it had to be de-plugged. While this sounds like an urban myth it is true that a lightning strike could hit the aerial and short out the mains which might cause a small explosion. The idea of a huge bursts of static frying everyone in the room though is something that never knowingly happened.
Black and White to Colour
One amazing thing that people can now never experience is the change from monochrome to colour. If you’d been watching a black and white set for years you learned to `see` colour on it in albeit in varied shades of grey. So you could watch a football match and discern the different teams even though their kits were `slightly light grey` and `a bit darker grey`. Then one day when you got your first colour set the sudden richness and depth of the colours was astounding. Reds, purples and blues in particular seemed heightened and the very notion you could adjust the colour was another revelation. On the other hand black and white did enhance some atmospheric dramas. Not that shows were ever made in monochrome as people imagined; in fact they were made in colour.
Not so sound
While advances in the quality of the picture occurred as the decades went by little improvement was made to the sound until fairly recently.  Compared to the state of the art developments in audio speakers for record players, cd players and beyond this was slow progress.  The speaker seemed almost an afterthought in the design of sets. Often it was located on one side of the screen only providing what was essentially `mono` sound in the stereo age. Some sets even had them at the back thus sending the sound into the wall behind rather than the room beyond.
Aerial Trouble
Having a tv aerial- as everyone used to- which stood atop the roof of your house was bound to cause problems. Rain has always been the bane of the television viewer’s life and inevitably affected the picture on analogue sets. It would go fuzzy, fill with static or in a particularly heavy downpour, the picture would be pulled to one side. Perhaps the spookiest thing that could happen was known as ghosting which is where a second image appeared ever so slightly to one side of the actual image. Remarkably even though most of the other analogue issues have long since been consigned to history ghosting still exists on even the most up to date screens. Officially it is caused by “mismatched impedence along the communications channel “or “multipath distortion”. However it has long been suspected the real cause is a temporal signal bounce back meaning that a tv signal from a parallel world is being superimposed into our world.
Bird on a wire
As an aside about aerials birds have always shown a tendancy to stand on them reinforcing the idea they are secret consumers of our media. If the tv is on when they are perched there does the picture transmit into their heads like VR? After all why else did they used to sit on telephone wires if not to listen in to everyone’s phone calls?
The tv repair man
Many’s the occasion in decades past before multi channels when the set was on the blink and no amount of banging the top would make any difference so you had to call the tv repair man. These individuals wore overalls to give them added authenticity and lived in a world where 99.99% of the pubic were “stupid” because they couldn’t fix a single issue on their television. The fault, whatever it turned out to be, would inevitably be something that the hapless householder had neglected to do. Easy really- that’ll be £60. Of course if it was really that easy to fix why did the TV man leave his business card “in case it happens again.”?
Posted by John Connors at 22:42