Simon Bates, "Thursday night on BBC1. Welcome to Top of the Pops and also welcome to Clare, a movie star and a pop star with Altered Images."
Altered Images: Happy Birthday [2]. Simon Bates describes Clare Grogan as a pop stair. He also names the band Altaired Images which makes them sound like they escaped from Forbidden Planet. You'd have to be a really small-minded pedant to pick up on that kind of minor pronunciation flub. Legs & Co stand at the front of the stage and sway along, which is a surprise given that last time I described their dance to The Tweets as a swan song. Apparently I was wrong. Legs & Co are still swinging. But their days are numbered! Flick Colby is somewhere in the depths of the Acton Television Rehearsal Rooms auditioning their replacements.


Rod Stewart: Tonight I'm Yours (Don’t Hurt Me) [18]. Rod Stewart is on video from Las Vegas. The production values of this video are ludicrous; night shooting, loads of extras, helicopter shots; taking over an entire motel. I'm surprised at how much money was available to be spent on an unremarkable song. The lighting bill alone must have been huge. Having said that I was never in Rod Stewart's target demographic so his success passed me by. He never impinged on my consciousness much as a kid beyond him singing Sailing, and Kenny Everett's impression (with constantly growing bum). The video gets Spinal Tap very quickly. There are lots of busty lovelies in leotards standing round being busty and lovely. And lot's of footage that looks like the result of spur of the moment thinking. "Hey Rod, could we paint a piano keyboard on the leg of a busty lovely, and have the keyboard player pretend to play it?" "Yeah! Great! Love it!" Etc, etc.
The Fureys with Davey Arthur,  When You Were Sweet Sixteen [22]. Simon Bates launches into a long rambling introduction. "Now, there's a record which you may have heard which has become one of those surprising things, a hit out of nowhere, (John- Unlike all those hits from somewhere) by The Fureys and Davey Arthur. Now The Fureys make themselves up out of David, Finbar, George, and Eddie. And this is the way they look, and this is the way they sound with an old, old song; 75 years old today." This long attempt to put a record into context is always a warning sign. Simon Bates may as well have said to the watching audience, "kids, you're going to hate this because it's a record your gran brought after hearing it on Radio 2." One of Legs & Co is pressed into service to sway along -wearing a long frilly Laura Ashley dress because this is serious- to add a little visual interest for the audience. Otherwise this would be three minutes of slightly stunned looking hairy men clutching banjos like shields against the wickedness of the world in which they've found themselves.
Olivia Newton-John: Physical [29]. Olivia Newton-John's weird slightly fat-shaming video. On the plus side, in a blow for equality between the sexes, the busty lovelies in this video are all men. At the end, why does Olivia Newton-John come into an aerobics studio dressed for squash and carrying a racquet?
Trevor Walters: Love Me Tonight [38]. Some of the audience have been given balloons. Others have been given roses. This will not end well.
B.A. Robertson & Maggie Bell:' Hold Me [13]. A repeat from the 15/10/1981 edition. 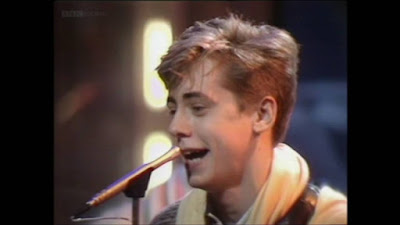 Haircut 100: Favourite Shirts (Boy Meets Girl) [40]. Legs & Co are back in the studio dancing by the audience. It's a measure of their decreasing importance that they are positioned to be semi-present. Being right at the edge of the stage means they never seem to appear in the background of shots of the band. You can see them in wide shots, or on the rare occasion when the camera cuts to them, but that's it. Presumably Michael Hurll took the decision to gradually fade the group out rather than axe them abruptly. I've written before about the various disappearing acts performed by DJs when the music starts, on this occasion we see Simon Bates getting into position for his next link. A wide shot catches him running on stage before the song ends so that he can appear casually leaning against a pole, "amazing". (John- This blog was nearly called Favourite Shirts)
OMD : Joan Of Arc [21]. Every now and again songs come on Top of the Pops which just kind of wash over me without leaving an impression. This is one of those songs. It's good. Sorry, that previous bit was the equivalent of a singer just going "la la la la la," because no one could think of any lyrics.
Squeeze: Labelled With Love [9]. The audience are a little more familiar with Labelled With Love this time round so there's no applause during the break in the middle. Number One: Dave Stewart & Barbara Gaskin, It's My Party. The promo film is exactly as bonkers as you'd expect. There's a party and some of the guests are mannequins. Dave Stewart (no the other one) is wearing martial arts head gear -and there's some business with front-axial projection to make his face disappear and glow. Two people are practising Kendo. You remember those Kendo parties from the eighties. We'd invite some mannequins, have some drinks and then all put on head protectors. Crazy days. Then, at the point where the tempo speeds up and they use that dew-woo-boo noise, we unexpectedly cut back to the Top of the Pops studio for some audience dancing and closing titles. There's no obvious reason for this. The video is available on Youtube and there's no unacceptable content that I can spot -unlike the video for Invisible Sun (footage of Northern Ireland) or Stand and Deliver (imitable mock hanging). Maybe Director Gordon Elsbury just liked the way it looked. Or maybe the BBC had some weird rule about not running credits over promo films. Or maybe this was one of the live editions and they were worried about timing. Or.. who knows.
Performance of the week: Altered Images: Happy Birthday