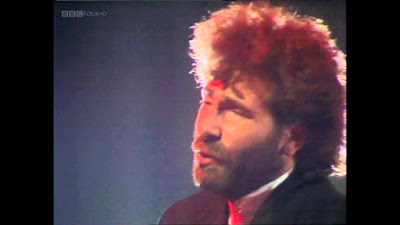 Sheena Easton: Just Another Broken Heart [37]. A repeat from the 17/09/81 edition.
The Teardrop Explodes: Passionate Friend [25]. Four for four. If it wasn't for the presence of Mike Read I could swear that tonight's show was just a re-edit of the 17/09/81 programme. The Tweets -unsurprisingly- give the same performance from the 17/09/81 episode, the mannered performance by Godley (or Creme) is the same -and the identical set doesn't help, then Sheena Easton is repeated wholesale from that same 17/09/81 show. If Julian Cope appears barefoot and standing on a piano I'm going to start thinking I'm going mad.17/09/81. Sorry, I think that's become a nervous tic. Fortunately Julian Cope breaks the vicious cycle. For some reason Julian is stood at the back of the stage, on the stepped area where the audience normally goes, then the audience are lined up, and then the band are at the front. With everyone facing the camera the effect is odd. As if the entire studio has decided to ignore Julian Cope. 17/09/81. Sorry. Maybe a glass of water will help.
The Creatures: Mad Eyed Screamer [34]. Well this is different. "Siouxsie and Budgie," Mike Read informs us. It looks, and sounds, so different to anything else shown tonight that I'm left wondering if the line-up of the first four songs was a deliberate attempt to emphasise the differece. Probably not, but the effect is startling. "Mad eyed dreamer," Mike Read says at the end. Close, but close only counts in horseshoes and hand grenades.
Ottawan: Hands Up (Give Me Your Heart) [3]. Legs & Co caper away dressed as showgirls on a stage designed to look like a western saloon. Naturally the audience have been given cowboy hats... well not quite. In what was obviously some terrible budget crunch the money for Stetsons has run out, and everyone else has been given straw hats. The end result is less old west more horrible Torremolinos theme night.
Toyah: Thunder In The Mountains [32]. Toyah's beginning to look like a parody of herself; she's bouncing around with her hair dyed into a large orange mop. The BBC spark generator is pulled into service with the output being overlaid on screen like lightning bolts. Unfortunately a poor selection of camera angles means the lightning appears to be emanating from Toyah's bottom.
Bad Manners:  Walking In The Sunshine [30]. Bad Manners are on location frolicking in the grey water at Southend. Buster, you don't need a walk in the sunshine. You need a broad spectrum antibiotic for protection against Weil's disease.
Altered Images: Happy Birthday [48]. The guitarist wearing a hat comes close to taking a tumble at one point. He lunges down on one knee, which is fine, but things go a bit wobbly on the way back up.
Gidea Park: Seasons Of Gold [28]. Gidea Park have had a row and only the lead singer (identified by Mike Read as Adrian Baker, let's name and shame these musical criminals) has turned up to the studio. Legs & Co are pressed into service to dance along behind Mr. Baker and his ghastly song.
Dollar: Hand Held In Black & White [19]. A repeat performance. Is it from... 17/09/81. No, this was culled from the show broadcast on 03/09/81 hosted by Peter Powell.
Number One: Adam & The Ants, Prince Charming. I would have gone to pieces filming that final walk up the staircase. "Right arm up... step... erm left arm up," "CUT, try again," "right arm up...step...right arm up again... both arms up... arggh forgot to step," "CUT, back to the bottom of the stairs again, places everybody," "step.. right arm up..." "CUT. It's right arm up, step, right arm up, step, both arms up, step, right arm down, step, right arm up, and repeat. Got it?" I'd have had the entire room watching my back, knowing I'm going to get it wrong again, and hating my guts for keeping them from going home. Diana Dors would never have spoken to me again.
Tight Fit: Back To The 60's (Part II). Mike Read is pinned on the edge of the stage by the crowd and unable to escape. He's forced to dance along to Tight Fit's medley and pretend he is having fun.
Performance of the week: The Creatures: Mad Eyed Screamer.