Marvel’s mystical medic!
The latest instalment in Marvel’s mighty Universe revolves around an unlikely character. Stephen Strange is a skilled surgeon and doesn’t he just like everyone to know it. Till one day when distracted by his phone he is involved in a terrible car crash which inflicts the most damage on his hands if not his sanity. Refusing to believe his career is over his search for an unlikely solution to his problem leads him to Nepal where he seeks what he thinks will be the cure but turns out to be a mystical cult whose calm skills seem ill matched to his temperamental sarcasm. It does seem a tad familiar albeit buoyed by Benedict Cumberbatch’s identifiably frustrated persona and some neatly planted gags that stop the whole thing being taken too seriously. Oh and then there’s some folding buildings…. 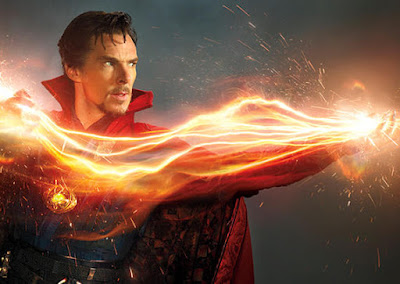 Doctor Strange is quite a strange film actually. On the one hand it deals in well versed narratives and familiar tropes; even those folding buildings are borrowed from Inception. Yet it does so with just the right amount of peril and a pace that never lets up. The early chase sequence is the most exciting in the film as buildings move like cogs in a giant machine in which a chase sequence is taking place. In 3D it’s a breathtaking spectacle which later ones cannot quite match but which nonetheless sets the pace. A later fight between two astral projections is more in keeping though with the movie’s intent adding some humour and original visuals. I especially liked the spinning vortex things with those dripping sparks giving a real sense of the energy and a cloak with a mind of its own. 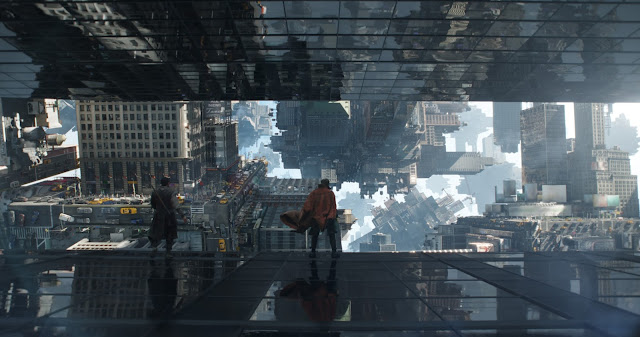 Yet there is as much thoughtful material as there is strident fighting. Strange’s attitude to his condition, then his subsequent encounter with the cult, then the world that unfolds is well written stopping just short of moralising (though amusingly the end credits warn us to drive carefully!). It is ultimately Strange’s arrogance that is his biggest barrier yet also his greatest strength. If you hold on to that you can navigate the later revelations involving sanctums, mirror dimensions and multiverses. Also in a role that could be silly Tilda Swinton employs a twinkle as the Ancient One who’s playful yet definitive lessons are a cut above the usual mystical teacher sort of thing. Excellent performances too from Chiwetel Ejiofor and Rachel McAdams mean we have characters that can interest us.
It’s a shame that the antagonists are less interesting and possess that seemingly universal penchant for exactly the sort of powers they need for a particular moment. Later the story tumbles into rather more obvious CGI mayhem and time turning malarkey that starts to feel more like Harry Potter than a Marvel movie. That being said, there is a different sort of climax that does make a refreshing change from the usual middle of a city smackdown and we even end up with buildings going back up rather than being knocked down! Now that’s progress!
Posted by John Connors at 22:45