Top of the Pops 1981 showing on BBC4. Being watched by Chris Arnsby.
Steve Wright, "Hello. Good evening. Welcome to another Top of the Pops. I think it's gonna be a mad one tonight. We're gonna start off with Modern Romance.  Ay Ay Ay Ay Moosey!" 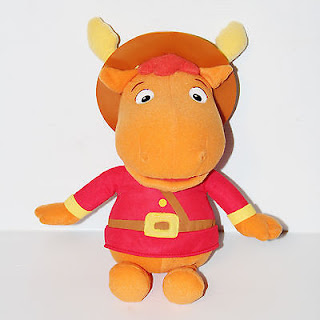 Modern Romance: Ay Ay Ay Ay Moosey [17]. Once again the Top of the Pops studio looks amazing. Ron Bristow is on Lighting and maybe he's illuminating the studio differently because the colours look more vibrant and vivid (although lurid would be a better description for the vile luminous purple shirt the lead singer of Modern Romance is wearing). It's not just the lighting. It's as if someone has tweaked and boosted the colour signal; presumably Vision Mixer Hilary West. The effect reminds me of how I used to play around with the television's colour and brightness because I liked the way it made the picture look. Oh, and someone in the studio (a luckless member of Zoo probably) is dressed in a Moose costume.

Julio Iglesias: Begin The Beguine [3]. Up to number three for this turgid song. Julio Iglesias is a vain, vain man. Look at the way he keeps smirking and glancing at the camera all the way through this video. All that's missing is a superimposed twinkle and a "ting" sound effect. Then suddenly Julio Iglesias is in the Top of the Pops studio. If he's in Television Centre and he's got time to take part in an awkward interview with Steve Wright then why couldn't he perform live on Top of the Pops? (John- The Beguine is a dance apparently)


Pretenders: I Go To Sleep [12]. It's time for more praise for Ron Bristow. The lighting is very well handled during this performance. It's soft and subdued when the song is quiet, and then brightens for the louder section, and then softens again. A simple trick but effective. 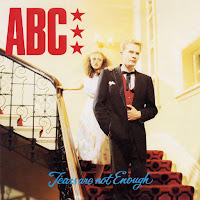 ABC: Tears Are Not Enough [26]. "This is the one they're all talking about in the discos," according to Steve Wright. Last time ABC's performance was inexplicably intercut with footage of Grant Satino ("Britain's first ever dance champ!" P. Powell, Shepherds Bush) this time we get to see two members of Zoo jitterbugging away.


Diana Ross: Why Do Fools Fall In Love? [19]. Ms. Ross runs up the middle of Fremont Street in Las Vegas and performs Why Do Fools Fall In Love in front of a wind machine and a medium sized crowd. (John; Anyone in the crowd and in love might think she was calling them fools)The relevance of this to the song? Zero. Presumably Diana Ross was in Las Vegas at the time and had a gap in her schedule.


Fun Boy Three: The Lunatics (Have Taken Over The Asylum) [30]. "They used to be The Specials and now they're the Fun Boy Three". Yes, fresh from the breakup of The Specials (in a dressing room at Top of the Pops) it's  Terry,Neville and Lynval (or Tel, Nev and Lyn -as I'm sure all the hip mags called them at the time). Marvel at some very desultory bongo playing at the start, and (I think) the first time out for a false colour/colour reduction effect which will go on to become an eighties staple.


Trevor Walters: Love Me Tonight [29]. Poor Trevor -dressed sensibly in a jumper and slacks- looks very out of place next to the trendy dancers from Zoo; especially the one on the far left who is having a go at this newfangled robot dancing. A low angle camera shot gives us a chance to admire the BBC's glitter dispenser. It's a sinister looking black tube fixed to the lighting grid which rocks backwards and forwards shaking glitter over everyone.


Soft Cell: Bedsitter [13]. Mark Almond sings a song about how awful it is to have to live in a bedsit while his fellow residents bang on the bathroom door and ask how long he's going to be applying his mascara. This promo film includes some excellent footage of eighties London; St John's Wood underground station, a Wimpy, Piccadilly, a telephone box, etc.


Number One: Queen & David Bowie, Under Pressure. Neither Queen or David Bowie are available to appear in studio (John- Is anyone this week?) so here's some post-apocalyptic ballet with the boys and girls from Zoo. It's a more conventional (for want of a better word) performance than their début to ELO's Twilight from a couple of weeks ago, but still very different to anything you would have seen done by Legs & Co.


Closing Titles: The Jets, Yes Tonight Josephine [31]. The audience and Zoo -fresh from their interpretation of Under Pressure- dance away. Steve Wright seems to have disappeared from the studio but he's been replaced by someone dressed as a ladybird. I wonder if it's the same person who was dressed as a moose at the start of the show? A bloke at the back of one crowd shot leaps up and down. He's trying to draw attention to his t-shirt which appears to carry the legend "Murphy China And Olaf." Or something like that. Sadly the picture quality is not good enough to make out the message.


Performance of the week: Fun Boy Three: The Lunatics (Have Taken Over The Asylum)