Wizards vs Aliens The Secret of Room 12


The second season of Wizards Vs Aliens was terrific culminating in one of those wonderful everything and the kitchen sink finales courtesy of Russell T Davies. The tone of `All Out War` suggested nobody was sure whether there would be a third season and had there not been it would have been an exciting way to finish. Obviously now there is, the show has not just got to face the challenge of following last year’s stuff but added to that RTD has left to pursue other projects while Gwendoline Christie, so pivotal to some of last season’s best moments, is also unavailable because being in Westeros she has to walk everywhere. Can the show thrive under the opportunity these absences provides? 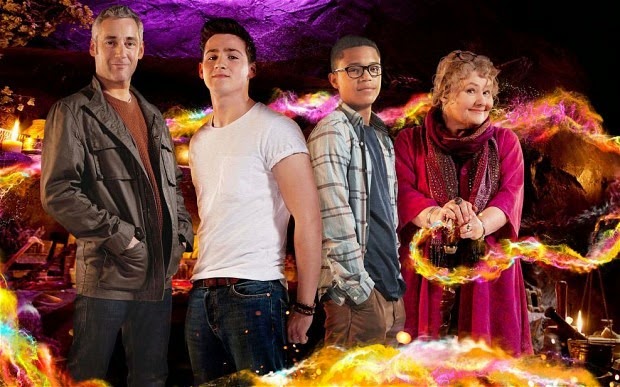 `The Secret of Room12` then has a lot to riding on it and manages to deliver confidently. Pupils are being taken over by something that is residing in the seemingly innocuous room 12 which refreshingly is not the Nekross but an ambitious- in both a dramatic and production sense- scheme to extract the Earth’s core by using the brain power of the possessed kids. Brisk and breezy the episode is well paced with moments of levity balanced by dramatic developments notably Tom’s reticence in using magic after what happened to him at the end of last season. This again gives Scott Haran the opportunity to show how he’s developed in the role since a hesitant start in the first series. The ongoing friendship with Benny- the Yin and Yang of science and magic is again brought to the fore and it is to the writer’s credit that they find different ways to illustrate this. Percelle Ascott continues to imbue Benny with fresh angles and it’s good that the character’s experiences have made him more confident.
Given the budget limitations the production team manage to pull off a convincing enough operation with the door to room 12 opening into a large factory setting; lighting and sound effects do the rest. The main villain – dubbed the Prospector- is a hoot. A boggle eyed fish man wearing a miner’s outfit is a random enough look but when he starts chatting in a Yorkshire dialect it makes you smile. So much more fun than had he cackled like a maniac. Alex Blake gives a broad but enjoyable performance though I felt that the spell Ursula conjured up to make him pursue her stretched the jokeyness just a tad too much. 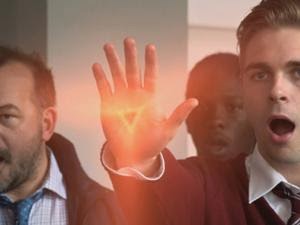 The Nekross of course are back in the end but thankfully King Mattress is gone. The sight of the big yellow guy- voiced as only he can by Brian Blessed- was always a mixed blessing and relied on directors to stop it looking like, well, a giant yellow mattress! Visually it sat uneasily with the otherwise polished look the show presented. Anyway he’s gone now and in the additional absence of Lexi, there’s Lady Lyzera who has ambitions and it seems some magic of her own. Alex Childs is a promising addition to proceedings especially as it seems she will turn Varg into something of a harassed husband.
There’s tons of dashing about and impressive action especially as they manage marshal dozens of pupils to walk about the school possessed. A good start to this third season.