Wizards vs Aliens The Quantum Effect


3&4/11/14; Written by Julie Dixon/ Directed by Mark Everest/ Starring Scott Haran, Percelle Ascott, Annette Badland, Michael Higgs
There’s a fun thread through the first part of `The Quantum Effect` in which we the viewer are thinking things that Tom then asks on screen. Thanks to his summer sojourn at MIT, Benny is invited to a top research station which turns out to be run by one person, the quirky Adam Wright. He then less than believably convinces the novice that the two of them will save the world by effectively twiddling a few knobs and re-aligning a couple of large radio telescope dishes. Tom is one breath away from turning to the camera and saying `this is a trap isn’t it?`It does take some convincing that Benny could be so easily fooled when he has hitherto shown both intellect and instinct way beyond his age but maybe the fact that he’s buzzing after an offer to join MIT on a permanent basis that he taken in. They just about pull it off thanks to Percelle Ascott who makes Benny so enthusiastic about the wonders of science that we can just about believe he would be tricked. It does play into the cliché of scientists being hopeless at anything but science though which seems a tad old fashioned. In fact the whole episode has the feel of an old 1970s Doctor Who about it- largely in a good way- as Ursula is called to investigate sightings of creatures from the Netherside getting through into the real world. Btw do we think this is any way related to the Nethersphere in Doctor Who? 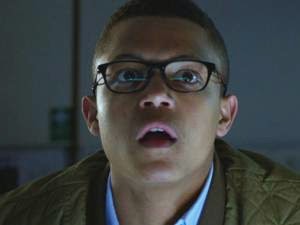 Bit of a spoiler coming up if you've not seen it...


We open with a sequence in which yet another Sarah Jane Smith dressalike  Eva Starling - all older investigative women seem to shop in the same place- played by none other than  Cherie Lunghi. She investigates these reports by wandering into a misty cave and being shocked by some glowing red eyes. She calls in Ursula and Tom’s Dad Clarke who invites himself- rather as his son did with Benny- only for Eva to be whisked away by the Nekross’ latest development.
The idea of hundreds of bugs that can transport wizards to the Nekross ship is a strong one though presents a potential story development issue. Eva’ escapes being drained of magic by convincing Lady Lyzera that she’d be more use to her alive as she can show her potential of endless magic supplies popping into our world. Mmm, as Lord Sugar might say. Surely The Nekross should have learned their lesson by now? Unfortunately Eva is almost totally absent through part 2 with her apparent escape happening off screen. The show is developing a way with twists that makes you wonder whether we might be seeing her again.
If the premise then of part 1 is a little wobbly, the delivery is top drawer. Once again the dynamic between Tom and Benny easily essays the fluctuating relationship that can occur between best friends. When Mr Clarke says, in a Downton Abbey style hint of trouble ahead “they’d do anything for each other” you know things are not going to go well. Tom’s disappointment that his best mate might be off to the States is perfectly pitched by Scott Haran.  The (pretend?) science is fun and there’s a satisfying line of continuity.  Great cliffhanger too; this show has definitely brought back the art.
Part 2 inevitably focusses on the rehabilitation of Tom and Benny’s friendship in time for them to co-operate in an unusual way to get rid of the Quantum energy the Nekross have generated which seems to have the unfortunate side effect of causing non wizards to start to  disappear from existence. Of note is an enjoyable turn from Tom Bell as both Adam and in the latter’s real form Jathro the technician from the last series whose attempts to fashion himself as a major villain and subsequent awkward acceptance that he is not provide ballast to what is otherwise a thin storyline. There’s a pacy rush to a rather hurried resolution involving little more than some running around and pushing of buttons -with 10 minutes to spare you wonder why.
The answer is a development that will change the dynamic of the show. All the way through the story Benny has been excited about his potential move to MIT while Tom is barely hiding his disappointment that his friend will be leaving. Usually of course in these scenarios it doesn’t come off for some reason and I was waiting for the whole MIT offer to be part of Jathro’s plan and therefore not real. As the episode moves into its final act however it becomes clear that it is. Whether Percelle Ascott decided to leave or the writers felt the series needed a refresh Benny bids farewell at the end and it is such a surprise that the viewer has less time to take it in than the characters.
Looking at it objectively it will send the show off in new directions with the likelihood that Katie will take Benny’s place at Tom’s side allowing a romantic angle as well as a friendship. That she isn’t as intelligent as Benny should mean Tom will become more resourceful. And yet the lovely science / magic dynamic works so well.  Of course Benny had become a character who developed so much he’d become super clever with abilities that potentially sap the potential for interesting scenarios plus the personal revelations from last season were unlikely to be developed much in the timeslot. Even so it feels like someone we know really well has gone and it’s as much a testament to Percelle Ascott who has been note perfect throughout that this is so. His approach and friendship with Tom is going to be difficult to follow but you have to praise a series that is bold enough to move forward in such an unexpected manner.