01/11/14 Peter Capaldi, Jenna Coleman, Samuel Anderson, Michelle Gomez, Chris Addison, Andrew Leung/ Written by Steven Moffat/ Directed by Rachel Talalay
Some of the best Doctor Who stories have happened when a writer and director team up to try something audacious, something outside the default setting of whatever the series is doing at the time. `Dark Water`, full of uncomfortable ideas, directorial poise and excellent performances is that kind of story. I know it’s only the first half and the second part may be terrible for all we know but right now, I’d hazard a guess we’re looking at a stone cold classic. 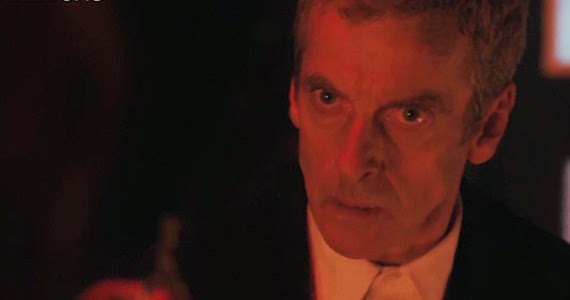 One of Steven Moffat’s more infuriating habits is killing off characters and then we discover that actually they’re not dead at all. It works if you do it well- or preferably just the once and I’m thinking of poor old Rory here- but generally it suggests a lack of confidence in a writer. As someone once said you sometimes have to kill your darlings. Ironically even though I’d bet that Danny Pink isn’t really dead the blank way it is suggested he is in this episode is masterful. It’s eerie and unsettling and director Rachel Talalay with her cinematic experience brings something altogether more striking to the wake. Look at the way the Cybermen slowly appear and emerge; surely this matches `Tomb of the Cybermen` and `Earthshock` and actually looks even better that either of them?
So Danny is dead (perhaps, perhaps not) and Clara reacts as only Clara can .It’s my last chance to say this so I will say it again- Jenna Coleman has been a revelation this season and once again she knocks it for six. There is something so believable about her performance; even when the overall direction of the show has been away from realism towards fable- that keeps the viewer engaged. Her reaction to the death specifically and, later, death generally only shores up what has been one of the best companion performances we’ve ever seen.
It’s around the midpoint of the episode that those press shots from months back swim into view and you realise, before we see a hint of metal, that the comfortably seated supposedly deceased are going to be Cybermen but even so their unveiling- slow, deliberate and, yes, poised is another sign that someone is helming this episode to perfection. Ditto Michelle Gomez. All the false press stories that the Doctor might be a woman have not prepared us for the fact that The Master could be. Sex change and death in one episode may be too much for some but the revelation is a spine tingler of the kind I was starting to think the series had stopped doing recently. 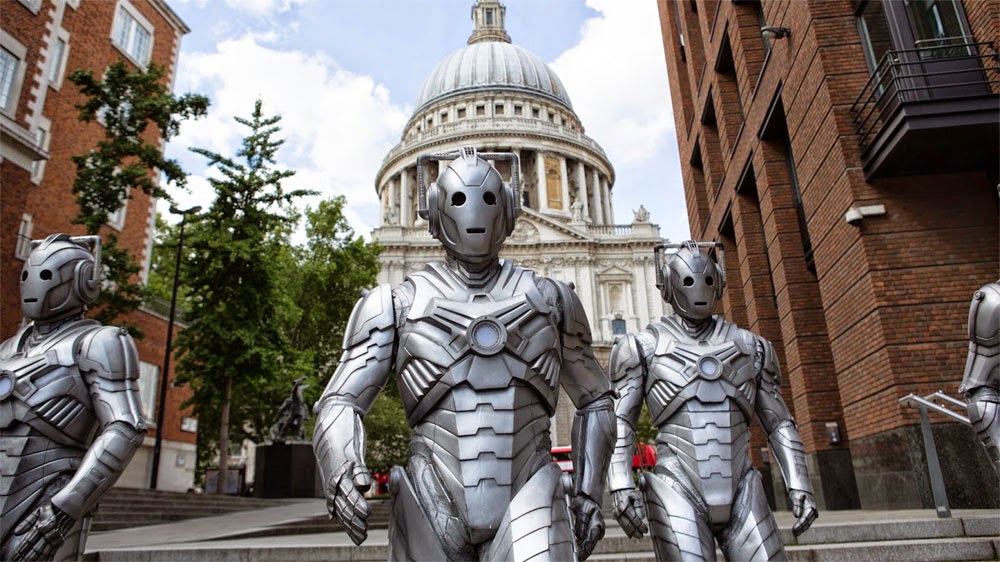 Peter Capaldi delivers a more nuanced performance here, perhaps under the guiding hand of Rachel Talalay he’s been able to dial it down somewhat because he does those looks and those serious asides in a manner that makes an impact. For those who have said they’ve found his Doctor too cold, too alien (ha! It’s what they were calling out for a year ago) then his explanation as to why he is still helping Clara after her intended blackmail is enough to prove the opposite. I watched it and it seemed to me that’s pretty much the essence of the Doctor, all in there.  Love the bit too about the swearing on the psychic paper -there surely has to be a scene with Chris Addison next week? The latter’s smarmy official Seb allows some levity to creep into what is a grim scenario.
The Radio Times suggested that the recently bereaved might find the episode offensive and I would imagine that reaction may not be confined to such a relatively small group of viewers. Which is why I mentioned the audacity at the beginning. We all moan about certain stories- or even whole eras- we don’t like but to be applauded is the writer or director who takes the show to places it’s never been before. Both literally and creatively `Dark Water` certainly does that. It has the verve of something like `Caves of Androzani`, the conceptual `don’t care how bonkers this sounds lets go with it` reach of something like `The End of Time` and the last few minutes reignite the thrill of something like those last few minutes of `Utopia`.
This is a challenging episode that may offend some sensibilities but it is important to watch it to the end where it is acknowledged the Master’s scheme plays on human traditions but obviously nobody is suggesting Heaven is really like that if indeed it is anything at all. You’ll have noticed a trail of great episode breadcrumbs through this review because there is something more about `Dark Water`, something extra special. There have been some great episodes this year- in fact only one I didn’t like much and even that was ok- but this feels like a level above all of it. Unexpectedly I think it’s the best episode of the season and this two parter has the makings of a classic. But will it play out like that- to end our very own cliff-hanger tune in for Sean’s review of part 2 next week!