The rise! The fall! The court case! The reunion! All contained in a fascinating film now available to buy.
Most films about groups with a long history consist of the occasional bits of grainy footage, lots of still photographs and plenty of talking heads filmed recently. We try to somehow reconcile the much older people we’re seeing talking with the younger energetic people in the photos. Fortuitously Spandau Ballet appear to have been filmed at every keynote moment of their career hence the big selling point of George Hencken’s’ film is that it comprises only archive action. From their teenage pre Spandau club gigs in the late 1970s up to 2009’s triumphant reunion tour, it is all here to see. This is a huge advantage that relies not so much on older recollections but takes us into each period of their career and the results form their own involving narrative. Whether or not you like their music, if you see this film you will like them and more significantly you’ll come away with a real feel for what life in the goldfish bowl of pop music success is like. 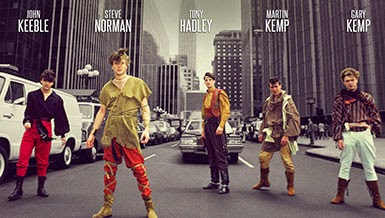 Essentially ordinary London lads, Spandau’s austere early tea towels and fringe look turns out to be a world away from their real personalities. As the film unfolds combining archive footage with recent narration by the fivesome you realise how lucky they were. With an ever changing musical style – there are some toe curling early efforts gamely included- it wasn’t until they embraced an unlikely combination of soul and electronic music that Spandau became a phenomena. They share much with rivals Duran Duran; not just the image but the sense of building their own tribe. So while Duran’s patronage of Birmingham’s Rum Runner was the bedrock of their early success, so Spandau used London’s Blitz to ply their music to a new generation of teenagers eager to dress up and dance away the austere times. They seemed to realise this was their moment and duly seized it. Lumped together as part of the New Romantic movement, the band were one of a number of artists to break into the charts at the start of the 1980s.
It’s interesting how different their early music is to the `True` era mega success with which people are now most familiar. Early songs like `To Cut A Long Story Short` rest as much on electronica than pop while their incursion into a funkier sound- epitomised by the brilliant `Chant Number One` and `Instinction` (the latter oddly absent from the film)- show an eclecticism we may not now attribute to them.  What the film also shows up well is the quality of Tony Hadley’s vocals. Initially poorly mixed, his voice would become the groups x factor, the signature with which we would instantly recognise them.  It was Gary Kemp who wrote all the songs though and his lyrical quirks may sometimes be ungainly but the songs possess a melodicism that makes the group’s best material memorable.


There’s a joyousness to the footage of these salad days, as the group party away while their whirlwind world revolves around them. In contrast to some other accounts of success, they seem largely to have enjoyed themselves and the camaraderie comes over in every clip. Stadium sized success arrives with `True` a smoother album recorded in the Bahamas and very, very eighties down to the ever present strings and narrow ties! The hits tumble out. We see Band Aid of course – they were hungover after being out drinking with Duran the previous night- and some great backstage Live Aid stuff.
While `True` and its successor `Parade` undoubtedly mark their commercial apex, it seems that 1996’s `Through the Barricades` marks the period with which they are most satisfied now and it also sees a further evolution into more worldly thoughtful matters. The title track for example was written about an associate of the group who had been killed in Northern Ireland. It’s after this point that, still using the same style, the film develops a more dramatic turn as years of success and fun turn sour.
The narration, recorded long after reconciliation, understandably tries to make light of the bitterness but telling footage cannot disguise what happens when the group drift apart in the wake of the Kemp brothers acting commitments.  Worse is to come when the Kemps find themselves sued by the other three over royalties. This is the only area where the respective parties are vague over their motivations. As Kemp wrote the songs the issue seems clear cut enough but the various members all seem regretful that it reached such a point. Here the film excels mixing footage old and new to underscore the personal pain these developments caused.
Happily the film and the group end on a high, reconciled after nearly twenty years; we see footage of one of their initial rehearsals starting tentatively but soon the five are in a circle playing like its 1980.  Finally we’re at an open air concert attended by thousands singing back the hits as the now visibly older but once again happier Spands soak in the love both on stage and off.
This is a much more satisfactory film than any dramatized version would be; the combination of sharp editing, honest opinions and of course the vast amount of available footage combine to tell an absorbing and very human story.