A stronger finale can’t disguise the feeling that all of this second season has been something of a transit with characters wandering or being chased all over the place only for the crucial scenes to all turn up at once in part seven. There’s also a whiff of convenience in the storytelling with characters being dispatched exactly when they would seem to have no further part in the story. Nothing especially wrong in that, writers do it all the time, but it happens twice here in the space of a few minutes and try as it might the script can’t quite inspire the emotions we should feel. Compared with traumatic events of the last episode of the first season this feels slightly flat even if there are moments of brilliance marbled through. Considering the slow pace of some of the episodes that came before the production struggles to do justice to key events which are raced through with undue haste. A shame because there are scenes when you can almost see the actors willing there to be more to say but there’s not. 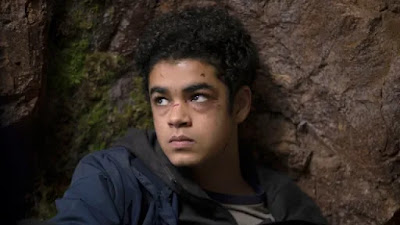 Events come to a head as all those wandering people finally crash into each other. Will finds his father and there’s an instant chemistry between Amir Wilson and Andrew Scott albeit one curtailed by a bullet after a relatively short time in which Parry senior has some exposition to be doing. I think this may be the trouble with the season as a whole, much of the dialogue has been mystical jargon about prophecies and destiny which works far better on the printed page where it is separated by description than it does scene after scene in a production. Though the actors do their best to be distinctive I find myself seeing them all as quite similar; in thrall to ancient mysteries and never quite saying what needs to be said. In the first season Lyra was the antidote to that speaking her mind and doing as she pleases.

Lyra’s relationship with Will is well essayed though and you value these conversations because they add something identifiable to a story that this week introduces another Thing which also provides the episode title- Aesahaettr. Yep I used to have one of those but gave it to the charity shop! Presumably this is what they’ll be looking for next season? This reliance on totems that contain somewhat convenient properties when it comes to plot developments is no substitute for characters being heroic.

Talking of which Lee Scoresby has his day in both respects this week which alongside John Parry means we’ve lost two characters who did bring a bit of levity to otherwise dour proceedings. I did like the way the shootout sequence through the woods possessed a realistically awkward quality, the bullets landing with messy danger, the troops sometimes a better shot than usually in such circumstances. Lee’s demise was a surprise in a way because you expect him to be rescued at the last minute.

Overall the episode looks stunning with some beautifully framed panoramas over the varying landscapes and a very meaningful shot of Will near the end. Yet I found the drama of it coming in the least anticipated places. Mrs Coulter’s savage assault on the witch and her subsequent bullying of her own grunting deamon, the unexpected Asriel speech at the end, the simple meeting of a long separated father and son, Mrs Coulter’s expression as she closes the trunk. Oh and at the very end when the credits have rolled a most unexpected sight.

This seems to be a story that excels at character introductions yet is too eager to rush them off screen before their potential is fulfilled. The plot this season is a little too reliant on intangible portent and mysterious objects but it remains a story whose conclusion in a third season, whenever it can be made, still promises much more.