At the end of this year it is more important than ever to be reminded of the power of the big screen. The largest tv in the world cannot compete with the average cinema screen for depth of picture, crispness of sound or the ability to transport you somewhere else and make you forget for a couple of hours what a crazy place the world is right now. If you can go to a cinema and see this film (or any film) to have that reminder do so. Eventually, hopefully, cinemas will be back, fully open and ready and it would be a shame if when that happened people no longer wanted to go. Wonder Woman 1984 is a perfect reminder of the power of cinema as it includes at least two sequences that the big screen is there for. You may carp and groan about CGI or superhero clichés or simply morality- and yes its all here- but there is something great about reconnecting with all that. Perhaps when cinemas were places we took for granted we became too cynical about the mechanics of production or too demanding for something new. Right now this movie tells a story that is straightforward, sometimes fun and always on the move. I’m glad that unlike so many other films lately it has been released to watch on the big screen. 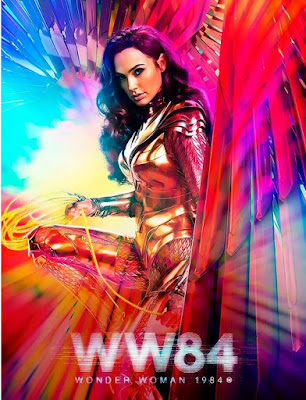 The film’s location in 1984 is surely no coincidence chiming as it does with the `greed is good` ethos that prevailed at the time and is at the heart of the script. In this case it is represented by an ancient artefact called a Dreamstone which gives its bearer their ultimate one wish – but at a cost. The stone’s arrival at the Smithsonian Institute where the ageless Diana Prince works coincides with that of new staff member Barbara Minerva as well as a visit by wannabe oil baron Maxwell Lord whose brash exterior hides huge debts. All three are affected by this stone in the first part of the film in which each gets their wish. So Diana gets Steve Trevor back, Barbara- whom we meet as a slightly too muddled introvert- becomes more confident while Lord simply becomes the stone and thus is able to really build his empire. If the plot seems a tad awkward the results are delightful and initially rather playful.

Steve’s orientation into the Eighties is, like the rest of the film, handled with just the right amount of knowing also revealing a really light comic touch from Chris Pine as he and Gal Gadot re-ignite a strong on screen chemistry. Kristen Wiig’s Barbara’s initial forays into a more outgoing persona are amusing and feel like an empowerment module for women of the time. Lord’s initial plans are portrayed by Pedro Pascal with comedic urgency as he struggles to fulfil the demands of success.

In all three cases matters take a dark turn once the cost of their wish fulfilment becomes apparent- Diana’s powers begin to wane, Barbara becomes aggressively ambitious and Lord’s escalating plans start to threaten world peace again playing into the decade’s Cold War and nuclear paranoia. The actors respond in turn. Gal Gadot is such an assured natural screen presence who can command attention and is superb as Diana becomes torn between personal happiness and global responsibility. Kristen Wiig’s evolution from accident prone newbie to powerful antagonist is splendidly realised. Chris Pine, in the sort of role normally doled out to a female character, shows abilities that will surely signal his move to more character driven roles. And Pedro Pascal an actor I don’t recall seeing before offers a refreshingly different take both on a superhero film villain and an Eighties businessman.

The movie’s ability to shift tone is masterful. Where else would you see a scene about the joy of piloting a plane through fireworks and then an hour later be confronted with a montage of angry Generals and threatening missiles. Its sharply observed without going over the top with hairspray and shoulder pads. Most notably a sequence where we see various people expressing their one true wish all of the requests are self serving. Very Eighties! However the story is always careful never to lose the personal touch to the point where despite all the action as the film nears the end, the denouement is achieved with words not violence.

Some may find the script a little preachy in places and an admittedly brilliantly staged opening sequence set in Themyscira does layer on the central message too soon so you know where things are going. Yet elsewhere such transparency is cleverly sidestepped- of course Diana knows the decision she will have to make but dallies so that Steve has to make it for her. And the viewer will know well before the character what ultimate decision Maxwell Lord will make. Yet the film carries itself with such charm that you allow it to wash over you anyway.

There’s another scene set in the clouds later in the film, just after Diana has made her key decision, and watching it made me realise how brilliant that big screen is for such moments. It is pure escapist entertainment, of course it is, but don’t we need a big dollop of that right now? I did ponder before going to see this film whether in the dourness of 2020 superhero films would seem irrelevant but they are not. This type of film is designed to give you a brief escape and lift your spirits  and as Wonder Woman soars into the clouds, Superman style, for a little while this film does just that.