A slow episode that ends in a stormy manner `Malice` sees the story visibly marking time. While there isn’t a bad episode to be seen in this series this is a slightly less interesting one. That’s odd considering many of the principal characters are now closer together than ever yet frustratingly they just keep missing each other! So while Mrs Coulter and Boreal wander around Citagazze, Scoresby and Parry’s balloon flies overhead. Lyra, Will and Serafina are in the nearby jungle wandering around going somewhere while Will’s wound worsens. Mary Malone is also wandering around like a tourist. Her beatific reaction to the place is a nice contrast to Mrs Coulter’s aggressive response in one of the more gripping scenes as she faces down the fearsome Spectres with sheer force of will. Does she meet Mary? Course not! 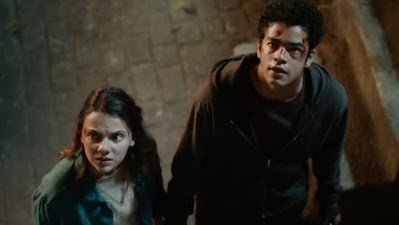 It may well be that this episode was originally intended to include additional scenes that were not able to be completed (the season did lose a whole episode) because otherwise the slow unfurling of these scenes calls to mind those Game of Thrones episodes where very little happens and characters talk to each other but not giving away much. Really at this stage these scenes should be speedier and more involving yet the conversations by and large cover old ground and reinforce the character traits with which we are already familiar. Mrs Coulter poisoning Boreal and later trying to put her hand in a flame works because Ruth Wilson is always interesting. Yet elsewhere I’m not getting the same colour from other characters. Boreal was an interesting guy about whom we could have learned more.

That said, there are some excellent moments dotted about. It starts dramatically with the kids forcing Lyra and Wil to go on the run. Mrs Coulter’s standing up to the Spectres is particularly effective even if coming in the same episode in which Parry whips up a shamanistic storm and the witches engage in some mystical healing it starts to make the series look more fantastical but less grounded. The jeopardy the balloon gets into at the end adds some excitement. There’s a rare human scene too where Mary encounters the girls Angelica and Paola. The latter’s wish to have a hug might pass relatively unnoticed normally but this year it’s suddenly quite an emotional moment. And Will’s reminiscences about being bullied also orientated us back towards a more identifiable narrative.

The thing about season 2 is that we have been propelled more strongly into a prophesy story which is the kind of fiction where plot sense can easily be abandoned. We now have so many characters with special abilities jostling for position. Both Lyra and Will have destinies, Mrs Coulter is clearly not an ordinary person and we now also have a shaman who can control elements and witches who do likewise. I’m clinging onto the hope the Mary remains a very normal human character and doesn’t suddenly acquire the ability to fly!