Doctor Who - Revolution of the Daleks review

Made over a year ago this is the first new Doctor Who we’ve seen since the world changed in real life and thus comes over as somewhat odd now. Despite some fortuitous resonances with scenes of a prime minister talking about safety and security the episode has the feeling of being made much longer ago in a different world. This is definitely not the fault of the production but shows that programmes like this may suddenly seem outdated now we’ve had a taste of something an episode might actually depict (of course aliens would be responsible for the pandemic). We now know what something that potentially threatens our whole world is actually like and I’m not sure you’d ever stretch to call it entertainment however many Chris Whitty memes try. I suppose the time will come when there are dramas made about the pandemic but I don’t know if that’s the sort of thing I would ever want to watch. When you’ve seen the real thing, drama can’t compete.

SPOILERS FROM HERE ON....

In a way a similar dilemma faces the Doctor’s `Fam` (can we retire that phrase now, please?)  as they have spent ten months back on Earth living normal lives not knowing whether the Doctor will return or even if she survived. The gist of this episode lies in their reaction both to that period and also to the Doctor’s return. I’ve not found any of the trio to be especially well rounded characters even if each has had great moments so to discover their uncertainties and inner feelings here feels a little late in the day. Yaz in particular has been underserved from the start yet suddenly emerges in three dimensions as if the ten months away from the Doctor have taught her more than the time she spent with. Maybe that’s the point? Its great to see but if Yaz could have been like this from day one she would be up there with Sarah Jane and Rose by now. There are hints of a potential crush (or more) on the Doctor though that seems like a well explored trope nowadays. You don’t really value what you have till it’s not there seems to be the overall message but woven in as well is the necessity to move on. Its interesting that it is Ryan, who has never seemed a deep thinker, who is the one most eager to move on and get back to earth.

It is rewarding to find this Doctor’s manic tendencies well in check as she reacts to her friends and also the news she received in the previous episode. It is ironic that in their last episode together the quartet are finally placed on equal footings. For all the talk we’ve seen in the past two seasons about the closeness of the group this episode’s conversation between the Doctor and Ryan feels like the first time we have actually seen it on screen.

The story itself sees Chris Chibnall mining his inner Russell T Davies for plot and visuals (flying Daleks a-aplenty, news broadcasts using real newscaster, big factories, public massacres) as he successfully shoehorns a narrative stretched across both time and distance to create a rollicking adventure once it gets going. While there’s nothing especially new and the big action scenes each call to mind earlier episodes from different eras it looks great (kudos for making a prison interesting) and holds your attention. 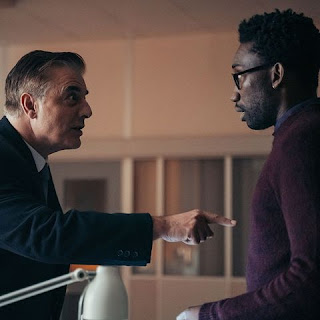 Chris Noth’s Robertson is penned as a more interesting character this time round and the actor rises to the occasion. Each time you think Robertson is going to die, he manages to squeeze out of the situation at each turn calling to mind the modern political survivor. John Barrowman is back as Jack and always livens up proceedings though seems less hyper than previously. Nathan Stewart Jarrett is very good early on as Robertson’s lackey genius Leo who ends up under Dalek control and I liked Harriet Walter’s Jo Patterson.

One thing Chibs is good at is keeping secrets, having unveiled the new look Daleks prominently as if they will now be the standard, he then has actual Daleks wipe them all out. Sucker to sucker the standard gold Daleks just look way better and when they exterminate their impure cousins it’s a moment for applause. It does make clear that the real Daleks are lurking ready to come back for future action. I wasn’t sure whether just calling other Daleks was a suitably interesting way of defeating Robertson’s ones and after the initial melee (loved the overheard shot of the two sides firing at each other like an old video game) the conflict seemed to peter out too soon. Couldn’t the departing companions have played a larger part in stopping the rogue pepperpots?

Ryan and Graham’s departures are well telegraphed but deftly played. Bradley Walsh and Tosin Cole never really got the chance to show all they can do but both will be missed. It took till this episode for Tosin Cole to be given a scene that takes us fully into his inner feelings. Bradley Walsh had little to do this time but he has livened up a number of episodes and I still love the idea of Grham taking sandwiches with him when adventuring. As for the John Bishop post credits trailer we have surely learned by now not to pre-judge a casting before we’ve seen the results.

`Resolution of the Daleks` ticks a lot of boxes and if it somehow lacks that classic feel it is a great way to kick off 2021.

TWU Loads and loads of Doctor Who material available to view on www.spacetimetelegraph.blogspot.co.uk