Reviewed by Chris Arnsby. David "Kid" Jensen: "Hello there. In our line-up tonight we have Haircut 100, Duran Duran, Soft Cell, and many, many more. But we kick off with Modern Romance with the original golden horn of the legendary Eddie Calvert performing Cherry Pink and Apple Blossom White."
[34] Modern Romance: Cherry Pink and Apple Blossom White. Modern Romance present more music for wine bars. The bass and percussion remind me of the song Christmas In Heaven from Monty Python's The Meaning of Life. I looked up Eddie Calvert on Wikipedia. He's a 1950's English trumpeter. Eddie Calvert led me to the Wikipedia page for the song Cherry Pink and Apple Blossom White, which led to the page for Modern Romance, which led to led to the page for John Du Prez (he's the bloke playing the trumpet), which by one of those odd coincidences led to the page for 1983's The Meaning of Life. It turns out John Du Prez scored the film with Eric Idle but that work didn't include Christmas In Heaven. Who'd have thunk it? 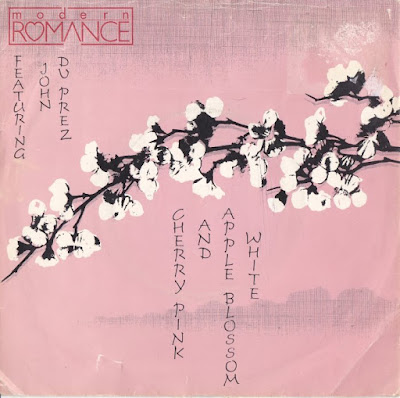 [2] Survivor: Eye Of The Tiger. The promo for Eye Of The Tiger is nothing but clips from Rocky II so it's something of a surprise to see it hasn't been cut. Recently BBC4 has been able to show promos for Chariots Of Fire, Fame, and now Eye Of The Tiger whereas in the past Bright Eyes and assorted songs from Grease all hit the edit room floor. Film companies must have changed their terms of use at some point in the early eighties. Frustratingly the official video for Queen's Flash was only shown once on a 1981 D*v* L** Tr*v*s presented edition so there was no chance to see if that would have survived the cut. This promo is a real treat for the eyes. Lots of clips of Sylvester Stallone looking like an oiled sack of walnuts. 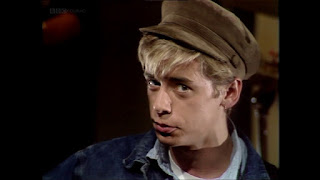 [33] Haircut 100: Nobody's Fool. Nick Heywood lounges in a chair at the start of this performance and there's a clapperboard to his right on the floor. Written prominently on the clapperboard is the message "I love Blair." Ahh! (John- I don’t think it was a reference to a future PM. The group’s drummer was called Blair Cunningham) As Nobody's Fool comes to an end the camera pulls back to give a wide shot of the studio, as it always does, and then fades back into a close-up of Nick Heyward. He stares at the camera, grins, and resumes miming. After a few more seconds the camera pulls back across the studio for a second time. It looks as if everyone forgot where the song ended.
[26] The Kids From Fame: Hi-Fidelity. A clip from the television series masquerading as a promo film. The song is let down by Lee Curreri's soft mewing "hi-fidelity" which sounds like the sort of noise made by a lost lamb. This is why they normally only let you play the keyboard mate.
[36] Captain Sensible: Wot. Excuse me? No expense is spared during the Captain Sensible performance. Props have brought a camp bed for Captain Sensible to pretend to wake up in, there's a Mickey Mouse clock (given such undue prominence it must surely be against BBC guidelines), and an Adam Ant lookalike walks on and is kicked over in a way that would have looked more convincing if the camera angles had been properly checked beforehand. How many times do I have to say it? This is what camera rehearsals are for, boys and girls. Actually the Adam Ant lookalike is on pretty sweet money. Once he's knocked to the floor he gets paid to just lay there for the remainder of the song. (John- Love this song, just the way the chorus goes “He said Captain, I said Wot” and we never really find out what he wanted) 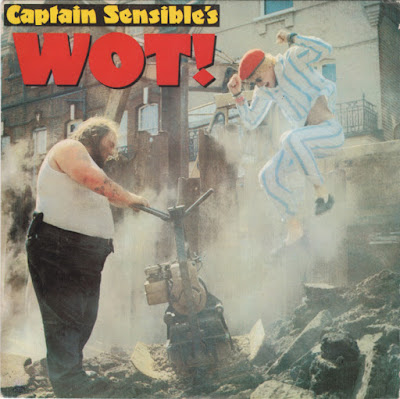 [28] Talk Talk: Today.  A video mainly notable for capturing on tape the angriest ever slicing off the top of a boiled egg. (John- Eggciting though)
(John- Actually this is the best edition in a long while. I like every song!)
[56] Thomas Dolby: Windpower. The staging of this performance is brilliant. The studio lighting (courtesy of Eric Wallis) is turned down unusually low and Mr Dobly is blasted with dry ice. It looks fantastic. The Quantel Paintbox gets a bit of a workout as well.
[27] Duran Duran: Save A Prayer. "On location in Sri Lanka," David "Kid" Jensen tells us. Yes, it all looks very glossy and expensive but there's nothing in the song that really calls for going all the way to Sri Lanka is there? Russell Mulcahy could have recorded a perfectly good video on the Kilburn High Road and saved all that mucking around with lagoons and helicopters. No, I'm just jealous.
[13] Soft Cell: What? Excuse me? Soft Cell return with a song whose chorus sounds distractingly like (There's) Always Something There to Remind Me. Towards the end of the performance some bright spark (possibly Graphics Designer Iain Greenway) prints What! all around the edge of the screen. It's just a shame they didn't also think to print the word Wot? on Captain Sensible to complete the joke.
[1] Dexy's Midnight Runners: Come On Eileen. A repeat from (if my memory is correct) the 05/08/1982 edition. The No. 1 -Dexy's Midnight Runners- caption used last week is absent because why should there be any consistency when it comes to presentation?
[11] The Belle Stars: The Clapping Song. The credits play over the standard shots of the crowd dancing. Gordon Elsbury is Director this week, so Michael Hurll must be on holiday again.
You wot!
Posted by John Connors at 23:54