Violin instead of guitar, two titles and covers, songs about lizards, nuns, yellow fever and the cat’s eye! Welcome to Van Der Graaf’s 1977 gem `The Quiet Zone / The Pleasure Dome`
Back in the days of record fairs, I discovered an album that looked a bit different. It had two titles and two covers one of which was unsettling because the sweaty violinist with the scowl was given centre stage as if he were very important. It turns out to be because the album has no guitar and is instead largely led by the sound of an often aggressive violin. Fluid bass and drums up front in the mix and the thick, dramatic vocals of Peter Hammill weaving in and out. By the time I bought a copy it was already more a decade or more old and someone had clearly had enough of it as it was an bizarre album to find in the sort of sales that normally house greatest hits. 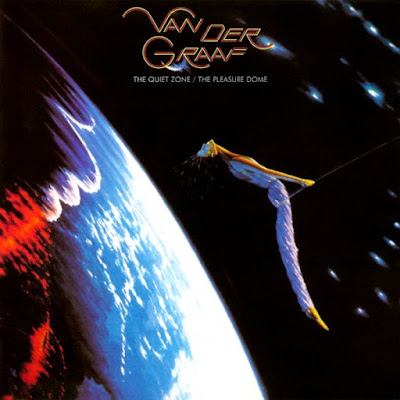 Oddly enough any Van Der Graaf Generator album I’ve since has not grabbed me in the same way as this one. You’ll notice the word Generator on the end as they were mostly known by this full title except for the mid 70s when for some reason they dropped the Generator. Their live album released in 1978 had the strap line “the most extreme live band in the world” and I can believe they probably were. Much of their catalogue is thick, impenetrable music. I imagine this particular album is known by ardent fans as their commercial one. Not that it’s especially commercial.
`Lizard Play` is brisk with the violin following the voice, successfully evoking the “baking earth” and heat that Hammill is singing about.  “He wants to know if she, keeps a pet or two” croons Pete as the song seems to be about connections and getting to know each other’s secrets; and the fear in love. Or it could be about lizards. It concludes “anyway, will you dance with me?” and you’re not sure if, in your head, you can see people dancing or a couple of lizards leaping about in the hot sand.
`The Habit of the Broken Heart` refers to “the convent of the broken heart” as an intense introduction builds up before breaking out into a bass led bit where you really notice the absence of guitars. The lyric seems to be a call to people who try to change themselves and employs religious motifs comparing the pursuit of love with the vocation of a nun. Thus the use of `habit` is as much about bad habits as any convent. “Whether or not you want to face it, you’re a beautiful girl” he sings. A frenetic violin solo rounds this one off.
`The Siren Song` starts with a conventional piano/vocal verse but there are some chemical similes to ponder and on odd bloiping noise (if I can invent that word) and indistinct vocals. The track surges with mythical and decadent imagery, turns mid way and speeds into a piano led romp still with that noise; and the violin poking in and out of the tune; perhaps the only concession to the more conventional prog around at the time
`Last Frame` starts off in positively demonic fashion as a sinister photographer declares that “”yes, my hobby keeps me busy, and if I talk to myself- well- it’s not a crime” over doom clangs and a circling violin but the song pads around and reveals itself to be more reflective. Hammill’s vocal is amazing here; the lyric seems to be about the passing of time; there’s a violin sound like a cat singing too; it ends with a sudden rush and the creepy bit where he says “but then I only have a negative of you” which is weird because you haven’t been able to understand a word of the preceding verse. 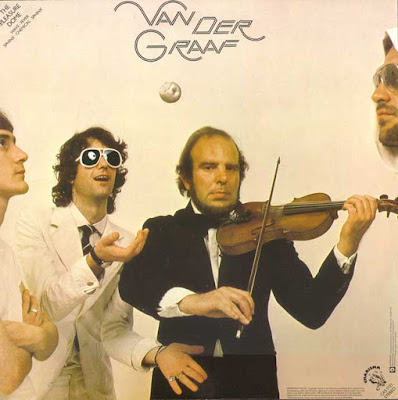 `The Wave` is the most conventional track with quite a pleasant melody and yet there are still some unusual vocal quirks and vibrant imagery -“semaphore on the shoreline” - and yes, it does finish with wave noises.
Urgent violin and Russian style melodies flood out and we have arrived at `Cat’s Eye/Yellow Fever (Running)`, the weirdest track which flaps at you like some manic pas de deux; is it about freedom? Possibly; there’s some Iron Curtain ideas going on; however what “ I got the yellow fever and the cat’s eye” means is anyone’s guess. Then it calms down into a bit of chamber music with slurping noises gradually becoming audible. And you think; how else would they end it?
`The Sphinx In The Face` sounds comparatively carefree after setting a jaunty pace concerning someone who’s going to have fun and “drink like a fish in water spout” as skittering drums are joyous but gradually doubts creep in till the protagonist is looking at the “Sphinx in the Face for answers” and the character’s life becomes less meaningful and he ends up a wastrel. This track is like a book in a song – and the outro lists things like “you’re so young, you’re so old”; all the moans people have about others.
`Chemical World`, as the title suggests is a drugs song - “why don’t you just- go on- have another one”  but opens like a Victorian music hall lyric and then addresses the morning after as Irish drums and distorted vocals torment us. The album ends with that `Sphinx` outro back again.
It’s an album that nobody ever seems to mention and which gets short shrift in any online VDG history but it remains in my collection and every so often gets a play. 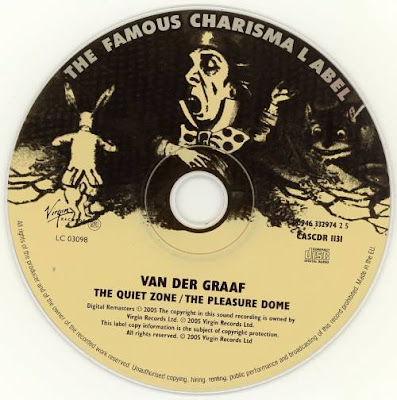